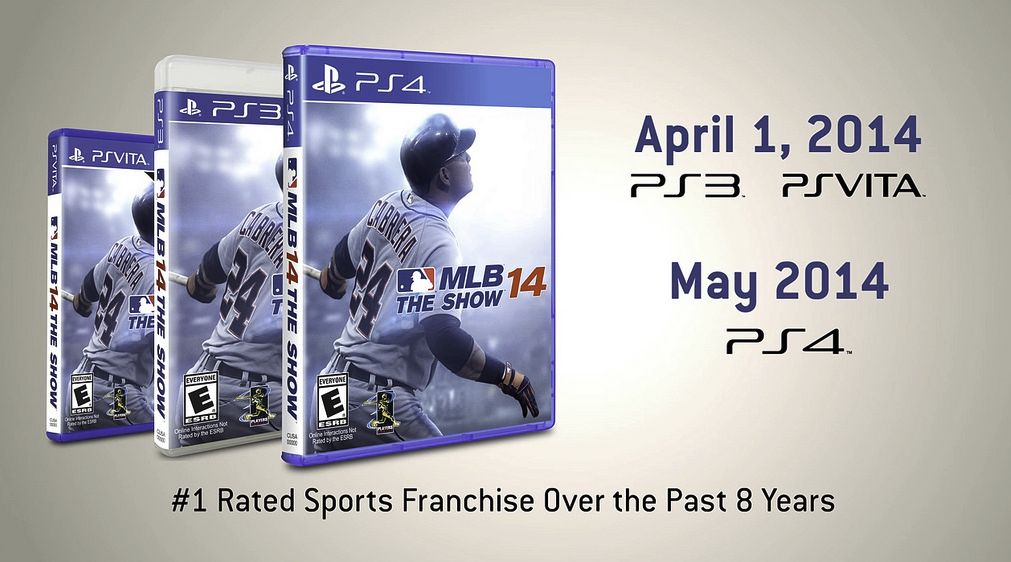 PlayStation’s annual and award winning franchise finally gets a release date, and we get an inside look at the new changes for the upcoming release.

Football season has come and gone, the NBA season is at it’s midway point, and the boys of Summer are reporting to places in Florida and Arizona. Dusty gloves are getting oiled and ready to be put to work, cleats are being cleaned, pitchers and catchers are already going over their player notes and pitching goals, and the MLB season is not that far away. With Spring training already starting up it’s time to get ready for some digital baseball and check in on San Diego Studios award winning franchise MLB: The Show.

First we have an official PS3 and PS Vita release date of April 1st, with a tentative PS4 date for May. Pre-orders have been up on Amazon for some time, but it’s never to late to reserve your copy for the console of your choice. An April 1st release date is a tad later than the usual drop of MLB: The Show, and with the season actually hitting the basepaths March 22nd down under in Australia, it is a bit odd. It’s understandable that they want to coincide with Opening Day here in the U.S., though and we can wait a week or so to take that first pitch. 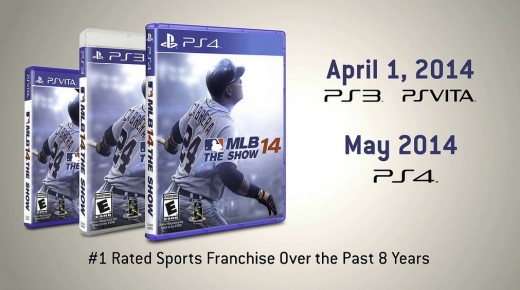 Not having the PS4 version ready for opening day is a bit disappointing, but at the same time I think we would all prefer to have a truly finished product and not some half-assed port that the developer slapped the next gen title on. From what we’ve seen of the PS4 version, it’s definitely not some half-assed port. While the PS3 version of MLB 14 isn’t that much improved over MLB 13, MLB 14 for the PS4 is night-and-day improved over it’s less powerful counter-part.

It’s one thing to say a game is improved, but pictures speak louder than words when it comes to graphics. While Mike Napoli isn’t exactly ready for the cover of GQ Magazine, he is ready for some MLB: The Show close-ups. We took a screenshot with the PS3 of MLB 13 to use as a reference for MLB 14 for both the PS3 and the PS4.

As you can clearly see, the PS4 is far and away the best in these screenshots. With last year’s MLB 13 not too far behind this years PS3 edition. That’s not too surprising since San Diego Studios is a first party developer and already knew how to squeeze as much as possible out of the PS3. The graphics for the series really has been on the cutting edge for several years on the PS3, and we weren’t expecting too much in that area. There are some improvements on lighting and shading, so that is a definite plus.

The graphics for the PS4 is where the game really takes a leap into next gen gaming. Looking at Nap’s beard in the above screenshot is beyond impressive. The length and detail is something we have only seen on high end PC graphics, and makes us all itchy just to look at. With this level of detail on a beard, just think about how detailed every other aspect of the game will be. Oh wait, you don’t have to think about it, just check out the latest PS4 screenshots below.

Now those are some impressive graphics. The level of detail goes above and beyond what we had seen previously in the series, and the jump to next gen is a pretty big jump.

Graphics are great, but since this is a baseball title, the gameplay is what will ultimately make or break a game. The series has always tried to bring fans as close to the game as possible without actually getting dirty, and this season’s edition is looking to add to the overall feel of the game. The Road to the Show has always been a fan favorite and we did get some hints about things to come, but we will all have to wait to find out what those are.

Some of the other additions mentioned include:

The most intriguing aspect to come with MLB 14: The Show has to be the ability to carry your game saves onto future titles, giving you the ability to have a long and storied career with your Road to the Show super-star, and not have to start over every year. Barry Bonds may sit at the top of the home run list right now, but his name will be supplanted by many in the future, as long as they pick up MLB 15: The Show next year and maybe even MLB 16 the year after.

One other new addition mentioned is the universal currency called Stubs. Fans of the series already know that you can either earn training points with a Road to the Show character by doing well in games, or you can take the fast track to success by purchasing training points in the PlayStation Store. There were other add-ons for Franchise mode as well, and all of these are now being combined into the new Stub system. What’s nice about this new system is that it’s now tied to your universal profile. For those of you wondering if buying Stubs is going to be necessary to enjoy the game, as a long time fan of the series I’ve never spent any out-of-pocket money on add-ons and have never had any problems progressing through the game. Think of the add-ons as time saver packs, a nice feature for those in a hurry, but not needed for those that really want to enjoy the game.

MLB 14: The Show is shaping up to be the best game in the series to date so stay tuned for our hands on previews and our full game reviews once we get our mitts on the full game.