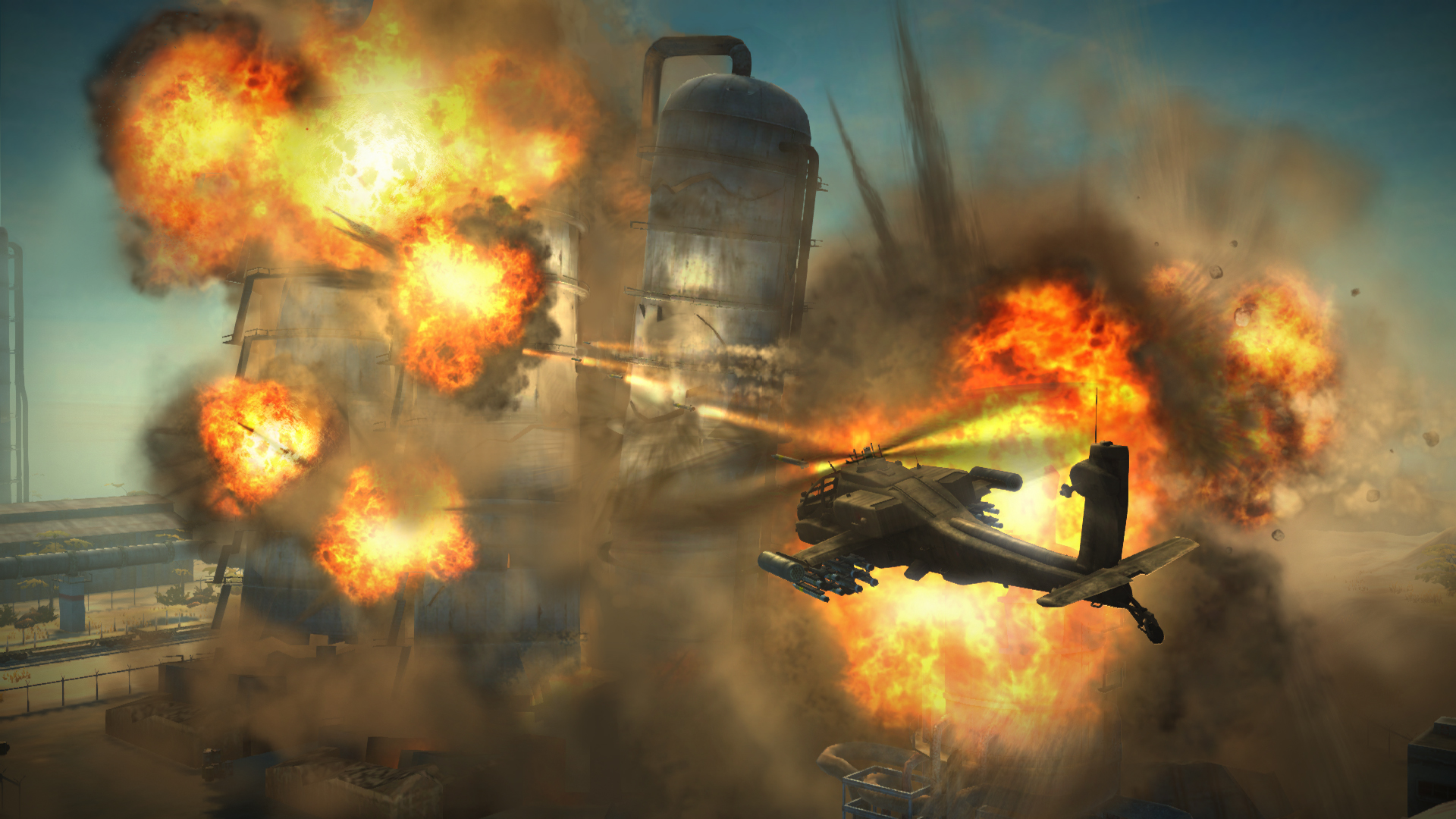 Thunder Wolves is ready to take for take off on the PlayStation Network. We jumped in our chopper, flew back in time to the 90’s and shot the hell out of everything that moved. The question is: Is the game ready for you and your friends to do the same?

Thunder Wolves. The name and logo by themselves give a promise of awesome chopper battles and epic chopper dog fights. You can envision your hellfire missiles and chain guns raining death and destruction upon your foes, with your trigger finger just itching to give the game a download and get set for battle. The anticipation will build as the download progresses, and eventually you’ll be firing up your chopper for your first mission. 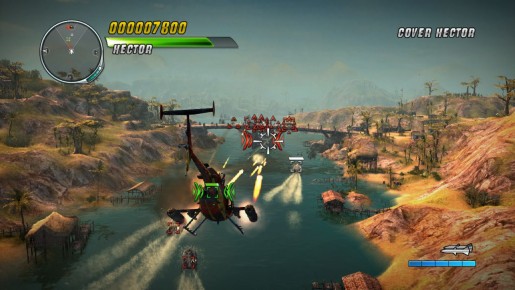 There really isn’t much of a story here. The game is set in the 90’s, when men were men and mercenaries were just plain awesome. You can just imagine The Governator or Rambo being cast as one of the characters in the game, and then given a call sign like Wolf or Max. It is your duty to go in there and complete your mission, all the while blowing up as much crap as you can. It turns out that even soldiers running along with nothing but a rifle are very explosive when hit with your chain gun. Musta’ hit a grenade on his belt.

The game is mostly a third person chopper game, with basic flying mechanics that won’t confuse you at all, and make flying a chopper through a system of caves seem easy enough for a toddler to handle. Your chopper is very tough and can even be slammed into a mountain repeatedly without much more than a cracked windshield (those cracks fix themselves so no need for any late night TV commercial fixes). This toughness comes in handy when other choppers are shooting at you or there are pesky tanks firing missiles at you. Even the soldiers rifles will send projectiles at you that seem more like a 35mm round then a rifle. 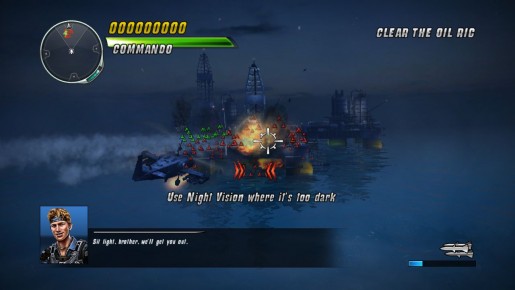 Not that any of that really matters, cuz your choppers are all diamond plated killing machines with unlimited ammo (missiles kind of take a short break after a few volleys but then come right back for your disposal). Your chain gun must have one helluva cooling apparatus as that thing never overheats and can be fired constantly. You can literally rain never ending death upon your targets. Lord have mercy on their soul. Roll on one.

Everything on the ground seems to be explosive, so be prepared for a lot of explosions. See a guy running across a hillside, he will explode when you shoot him with a bullet. Maybe he ate C4 for breakfast. Maybe it was that grenade he had in his pocket. Maybe we don’t really care and just wanted to see him blow up. Whatever the case, he will blow up when shot. Same thing goes for hangars, antenna towers, silos, smoke stacks, and so on and so forth. If it’s a target, it will explode when shot. You might find yourself using nothing but your chain gun and never letting it rest. 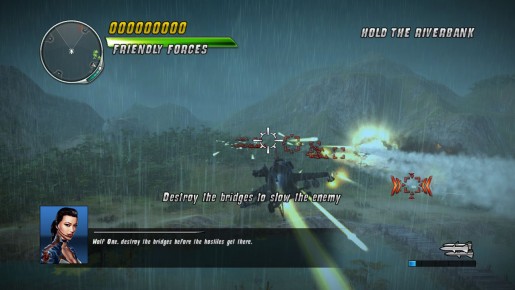 During your flight time there will be constant voice overs either telling you where to go, what to blow up, who to kill, or just telling you how BAD ASS you are. There’s a lot of that ego pumping stuff in this game. The problem, though, is you can’t really see any details to what all you are blowing the crap out of. The guys running around on the ground could be Oompa Loompas for all we know since there’s no real detail and a reticule pops up on them as soon as they are in range. I really don’t want to kill Oompa Loompas. Willy Wonka would really get mad. Or sad. Or, I don’t know, maybe quit making chocolate and that would suck for everybody.

There really wasn’t any attention to detail throughout most of the game and the graphics are a little hard on the eyes. The frame rate is choppy from the get go and only gets worse as the screen fills up with death and destruction. As you progress through the campaign, more choppers are unlocked, but they all seem very capable and damn near indestructible, so does it matter which one you choose? The terrain changes quite often, and the targets are varied enough for each mission that monotony never really sets in. You almost have a feel of an open world for you to explore and maybe try alternate routes to your objective, but that will end in disappointment when the game starts beeping at you and telling you to turn back. 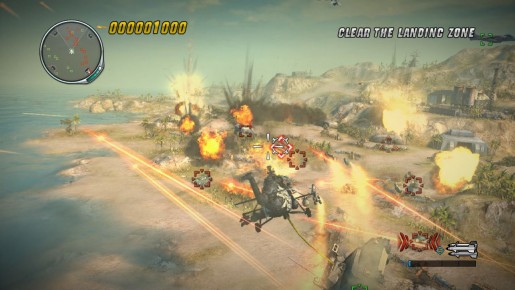 The sounds and music for the game fit the 90’s era well. Heavy metal music and guitar riffs will entertain most, and words like awesome, epic, and sweet are dropped quite often. Chuck Norris would have felt right at home with this script. The language goes from colorful to worthy of a sailor at times, with plenty of clichés to go around . While a toddler could fly these choppers, you might not want that same toddler repeating some of the more colorful phrases.

Thrown in to help break up the occasional monotony that might come with the raining of death and destruction are a few types of missions that we weren’t expecting. Early on you’ll find yourself manning a mini-gun out the side of a chopper, shooting down other choppers and killing bad guys below. There’s also a sniper element thrown in for good measures and you’ll even get to drive a tank. More of these missions would have been nice, but we were surprised to find them at all, so kudos for that. 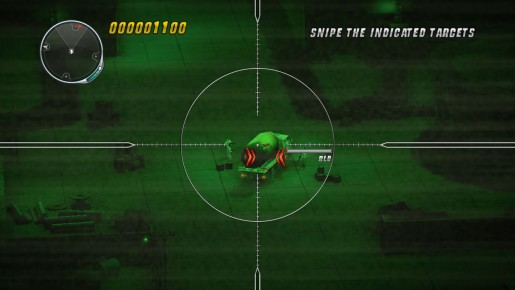 Multiplayer was a bit of a let down. In this day and age, not having online multiplayer, but having local multiplayer seems like a cop out. If you have an extra controller and an extra friend to come sit with you on your couch, two of you can blast and blow up crap together, via split screen. While this does double the death and carnage, and give you a drinking buddy to help blow crap up, not having online play was disappointing.

Thunder Wolves is one of those games that tries to be over the top campy and funny, but doesn’t always hit the mark. The graphics were rough on the eyes, the frame rate choppy, and hopefully we didn’t piss Mr. Wonka off by killing any of his friends. Hard to tell since we couldn’t really see what we were shooting on the ground.

If you are looking to blow crap up, and you don’t really care who or what, this game will keep you happy.