The motion controller, which looks like a wand with a small, pink globe at the top, will be used to control games in a similar manner to Nintendo’s Wii Motion Plus controller. It debuted at E3 2009 and has since been kept under mostly tight wraps, although the codename “Gem” was revealed accidentally by EA CEO John Riccittiello at the 37th Annual Global Media Conference in December.

Sony has declined to comment to Terminal Gamer or anyone else at this point regarding the name, so this remains a rumor until confirmed. 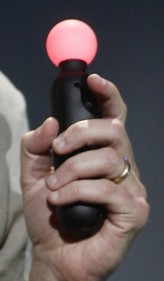