January 19, 2010 – Mass Effect 2, the highly anticipated sci-fi RPG from Bioware, will feature the in-game Cerberus Network. The Ceberus Network will function as in-game portal that will allow fans to access DLC and news without leaving the game world.

A press release issued by EA and Bioware today highlighted the features of The Cerberus Network, saying that it will be “activated exclusively by original purchasers of Mass Effect 2 through a single-use unlock code that comes included in retail and digital versions of the game worldwide. ‘The Cerberus Network’ is a conduit for players to receive bonus content as well as daily messages and news on upcoming releases for Mass Effect 2 for no extra charge.”

In addition, the press release clarified that people who buy the game used can still unlock The Cerberus Network through the use of a one-time, in-game purchase of a new activation code.

Players who purchase the game on its release date of January 26 will receive the first DLC pack through The Cerberus Network that day for free. It will feature new missions and new items. The press release revealed that the DLC will introduce Zaeed, “a gun-for-hire who is recruited to join Commander Shepard’s mission to save mankind.”

There will also be a second DLC release soon afterwards that will introduce a new vehicle, the Hammerhead, to the Mass Effect universe. The Hammerhead will be a hover tank that will aid players in combat while exploring new planets. There will also be DLC that includes Cerberus Assault Armor and the M-22 Eviscerator Shotgun, which just sounds deliciously vicious.

Mass Effect 2 is being released on Tuesday, January 26. It was named our “Most Anticipated Xbox 360 Game of 2010” and will be available exclusively on the Xbox 360 and PC. It was developed by Bioware which is based in Edmonton, Alberta and will be published by Electronic Arts. 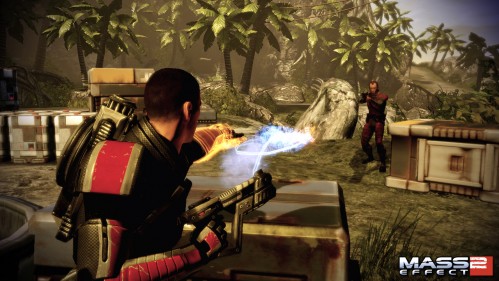