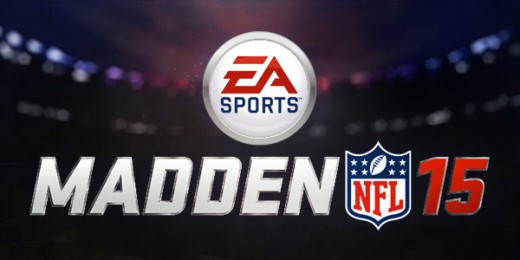 The annual release of the sole NFL video game is making its way to a console near you. Did EA fumble the ball, or is this the Madden we have always wanted?

The NFL pre-season is almost over and each team is almost done finalizing their rosters for the season. With the regular season rapidly approaching EA Sports has sent us a copy of Madden NFL 15 an we have went through training camp, pre-season, and parts of the regular season. To say we were impressed would be an understatement.

Madden NFL 15 isn’t the  first Madden game to be released for next gen consoles (PS4 & Xbox One). Madden 25 was released last year and we were far from impressed with it. While it was a solid PS3 and Xbox 360 title, its leap to next gen felt more like an after-thought. It just didn’t look and feel like what we were expecting from a next gen Madden game.

Madden NFL 15 turned out to be next gen game we were expecting.

Upon first launching the game you are thrown into a GMC Never Say Never Moment. These moments will be situations that have arisen during the season and have you try to change the outcome and alter history. The opening moment you jump into, which EA calls its First Interactive Experience and happens while the game is installing to your PS4 or Xbox One,, will throw you into a late game scenario between the Seahawks and the Panthers. It’s a great way to be introduced to this newest edition of Madden and fans of the series will see quite a few changes. 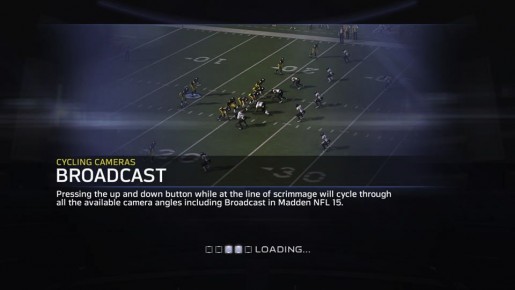 First and foremost you’ll notice the improved and jaw dropping graphics. This is what a next gen sports game should look like on next gen. Cam Newton looks just like Cam Newton and cover athlete Richard Sherman looks just like himself. Player animations are smooth and life-like and not the stiff and almost plastic looking fellas of the past. It’s obvious that EA took their time to create the player models and the end result is fantastic.

The number of in-game camera angles has grown with leaps and bounds. Players now have the option to cycle to new defensive cameras before the snap of the ball which rotates the camera so it sits behind the defense. Rather than attempting to read a play from the wrong side of the ball, this new viewpoint places the camera over the shoulder of the controlled defender. From this view, it is easier to see which way the offense is moving, where the blockers are going, where holes are forming and what route the running back may take through the line. During pass plays, the camera smartly pulls back while continuing to track the ball in flight, allowing for seamless switching to the nearest defender and minimal play disruption. Those who wish to focus on a specific player can also turn on a defensive player lock camera, keeping that individual centered onscreen for the duration of the play.

Your hurry up offense (pressing triangle right after a play ends and while the game clock is ticking) was the first thing we noticed, other than the much improved graphics and animations. Running a hurry-up offense felt hand-cuffed before as you were very limited as to which plays you could call without using an audible. You can now choose from your playbook while your players are lining up and getting ready to go. This happened quickly and gave the game that up-tempo feel you would expect in a late-game situation and we found ourselves running that offense often. While we did fail the first time we ran through the opening moment, there is the option to try it again from the main menu.

Once you’ve ran through the opening moment you’ll be introduced to the new tutorial section called the Skills Trainer. While Madden is all about NFL simulation, the developer went out of their way to create a system that not only teaches you how to control the game, but it also teaches some basic football concepts on both sides of the ball. 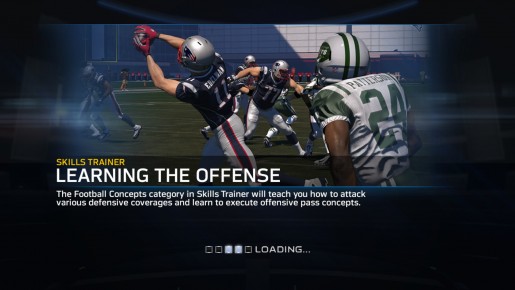 These training tools can help you learn to read offenses and defenses like a pro if you’ll let them. One of the reasons QB’s like Peyton Manning and Tom Brady excel at their positions is their ability to read a defense. Utilizing a hard count, one can see what the defense is going to do before they do it, and then adjust accordingly. Is that a left outside blitz coming? Use your controller to shift your offensive line to better contain it, and maybe audible for a quick slant. Madden wants you to know all about this things and created a robust and intuitive skills trainer just for that reason.

For those of you that think you already have the skills needed, head on over and try to run The Gauntlet. Available within the Skills Trainer menu, The Gauntlet allows players to put their Madden NFL skills and football knowledge to the test. The Gauntlet features forty increasingly difficult challenges testing all aspects of your game. Early challenges may be as simple as utilizing Acceleration Burst to gain a couple yards, while more complex stages require advanced skill at reading the defense or, conversely, containing a high-powered offense. 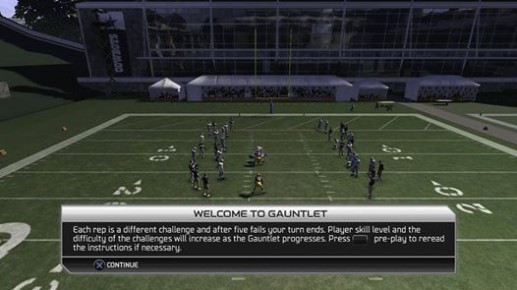 These challenges go beyond simple drills and game situations though, as every five levels features a unique boss stage that puts a crazy twist on proceedings. For instance, the very first boss stage requires you kick a 110-yard field goal in hurricane force winds; while a later challenge will drop you into media day at the Super Bowl, as you try to score a touchdown while dodging not only defenders, but cameramen, sound engineers and even your own teammates.

Included in the skills trainer are tutorials on all of your new moves on defense. No longer will you get tied up by a blocker if you can master these skills. Finesse moves can have you shedding blockers like a bad habit, and have you putting the hurt on QB’s all day. Timing your jump off of the snap is key to getting that initial move down, and if you do it right, you can steer that blocker out of your way or into the RB’s running lane. Either way, it will help you to be better at your position, whether it be a LB, OLB, or even a DT. 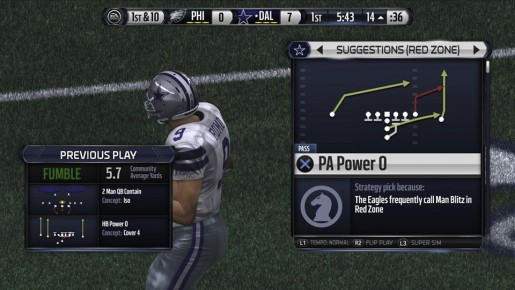 Longtime Madden NFL players will notice that the play call screen has been redone this year, with an added emphasis on data. While you can still call plays based on formations and/or personnel, new options have been introduced to provide a deeper level of customization and access. First off, those looking for suggested plays can now make calls based on strategy, community or favorites. All three methods employ situational play calling, similar to what NFL coaches do on any given Sunday. Most teams don’t pull from their entire playbook, instead opting to utilize a handful of formations and plays which are likely to be effective. Thus, rather than cycling through 300+ offensive and defensive plays in Madden NFL 15, players can utilize advanced strategic AI to help narrow the focus to the plays most likely to succeed in a given situation.

Madden NFL 15 provides an informative pre-game show and the franchise’s first true halftime show, featuring studio host Larry Ridley.His pre-game insight can help guide you as to which players will need to be contained, and maybe even which players aren’t performing all that great. If a WR is in a slump, maybe you won’t need to double team him and can give some help to another CB. The half time show is catered to your actual game by calling out the stars of the first half and giving their actual stats. These additions give the game a more real-life feel and help to draw you in. 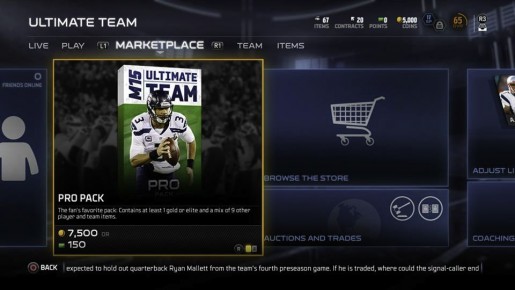 EA did bring back the Madden Ultimate Team (MUT), which is a trading card style of creating your team and competing. Playing through the Skills Trainer will net you several packs of cards to be used with your MUT, so be sure to complete as many of skill challenges as you can. Not only will you be improving your overall Madden skills, but you’ll be helping your MUT as well. You’ll be able to collect player cards for just about every Hall of Fame player known to the NFL, and building your team with these high caliber folks is the key to success.

Connected Franchise also makes it return to Madden NFL. You can play online or offline and play as either a player, a coach or as an owner/coach (the Jerry Jones option?). All three options will have you choose between a created character, a current character, or as a legend character. We found it surprising that William “The Refrigerator” Perry has two options (he did play as a RB and scored a TD in Super Bowl XX) but names like Roger Staubach, Broadway Joe Namath, and Brett Favre, to name a few, didn’t make it into this feature. Maybe these can be added as DLC but at least they have the Triplets from the Cowboys of the 90’s and Barry Sanders. Making it’s comeback this year is the ability to makange your Fantasy Football team through the game and NFL.com. If you’re going to be playing Fantasy Football via NFL.com, the management aspects of the game are pretty top notch and you can keep your team up to date and manage it completely in-game. This is a great feature for those that enjoy fantasy football.

Madden NFL has been around for a long time and it’s not easy to bring something fresh and new to the table. EA has no competition and could have easily phoned this game in and would still have raked in the dough. Instead, they opted to create a game that redefines the franchise and will make it even harder to top next year.

John Madden should be proud to have his name attached to this next gen masterpiece as this is the Madden we have all been waiting for.

Thank you EA Tiburon for taking this franchise to the next level.