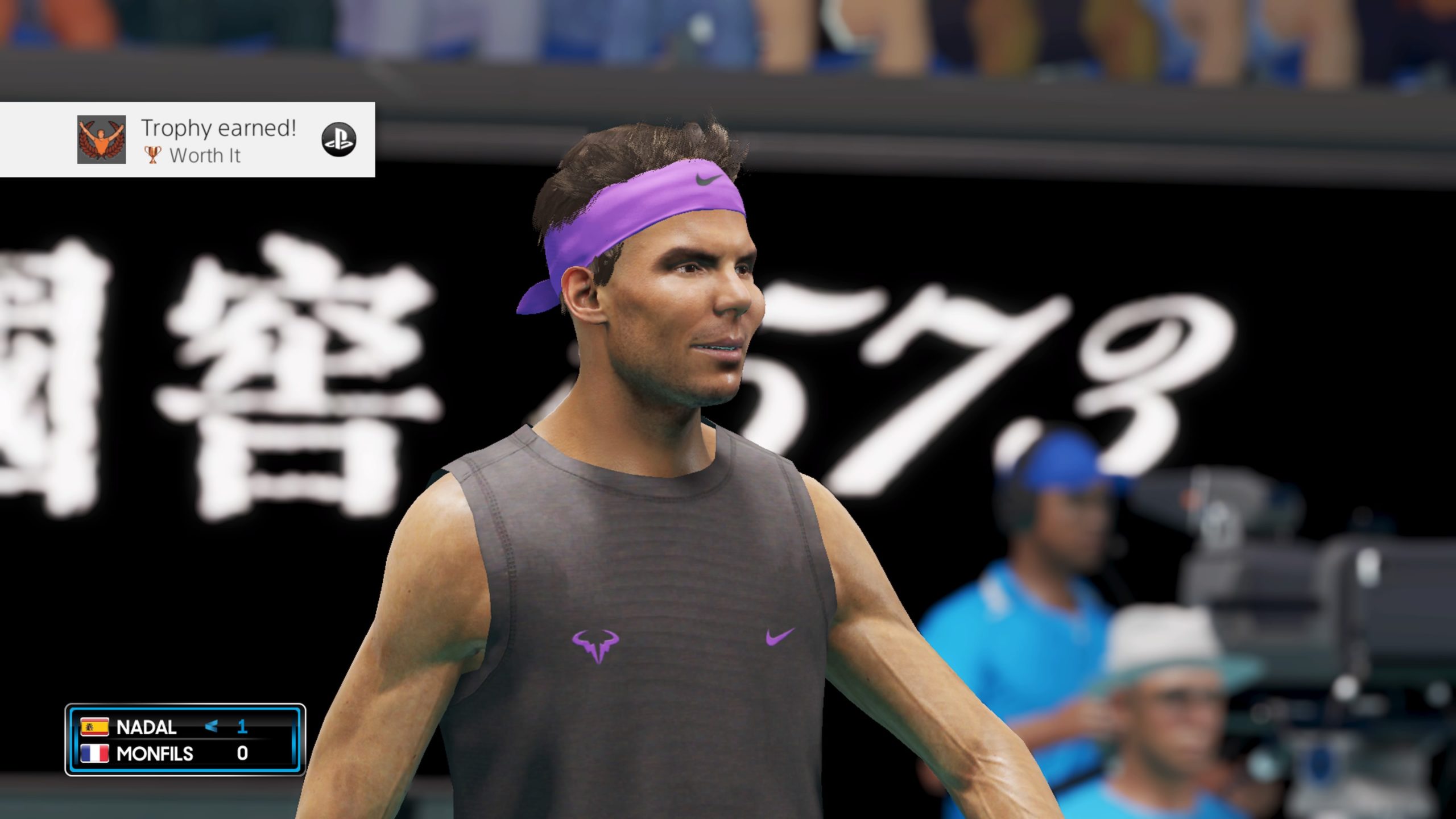 Developer Big Ant Studios has released their latest tennis title AO Tennis 2 upon the world. Did they learn from their past mistakes or is this just another washed out game on the clay?

Big Ant Studios is an Australian developer better known for its cricket games. They released their first tennis title back in 2018, AO International Tennis, to some not-so-great reviews that focused on their lack of polish, numerous bugs, and poor quality animations and graphics. They could have cut bait and ran as far away as possible from the genre, but instead took that criticism to heart and started working on their product. Through a series of updates, they worked to make their first title a much better game than it was at launch, and then took all of that learned info and used it to create their follow up title AO Tennis 2. 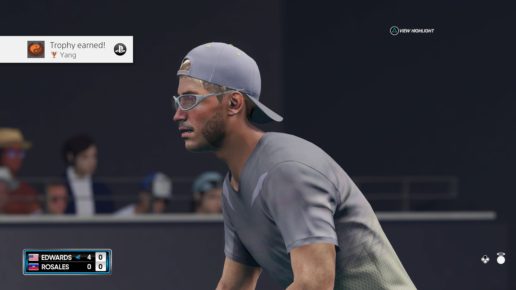 Understanding the Mechanics of the Game

The first game in the series originally had no tutorials or on-boarding experience, so you had to just jump in and figure it out on your own. They did finally add a tutorial in after listening to their fans, and smartly they included a fully fleshed out tutorial with AO Tennis 2. Even if you have never played a tennis game before, the tutorials do a great job of introducing you to the mechanics and lingo involved in the sport, and teach you how to be successful.

From underarm serves to flat serves, the game teaches you how to perform each one using your controller as well as how to aim your serve. Once you’ve practiced that enough, you can move on to your return shots. Whether you want to learn a flat shot, lob shot, drop shot, slice shot, top spin shot, or just want to smash it home for the win, learning and mastering all of these might just help you win that coveted Grand Slam. It definitely can’t hurt to learn all of the techniques available to you. 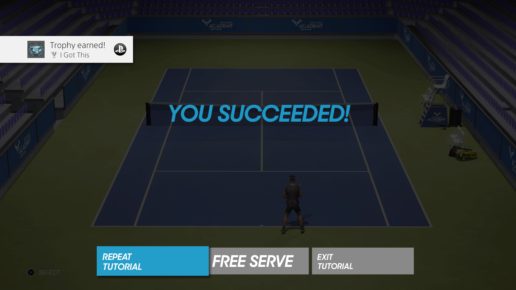 Instead of just jumping into a quick game, we decided to start out on our career path by creating a player. You can choose to create a maxed out player or you can create a basically skilled player. The maxed out player is just too overpowering and makes matches not much of a challenge, so we went with a basically skilled player in order to work through the RPG like system to slowly upgrade our guy. You can choose male or female, with a variety of body shapes, sizes, and colors and then can set your limited skill points to create a player that is to your liking as far as game style.

Once created, you can start playing matches to earn cash so you can upgrade your team and your player. The RPG elements to the game are a nice addition and you can buy upgrades for a variety of support team items and travel expense discounts. You can upgrade your coach for more XP, your nutritionist for less fatigue, and even your doctor so you can heal from injuries quicker. You’ll have to earn quite a bit of winnings to afford some of these luxuries, but as you progress through your career, that shouldn’t be too hard and the investments can pay off by making you a better player. 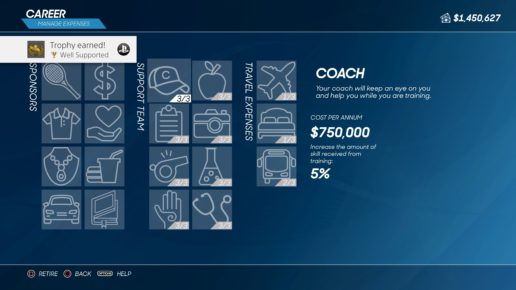 Do You Want to be a Good Boy or a Bad Boy (or Girl) of Tennis?

As you play through matches in your career, you’ll have ample opportunities after faults or points to react either positively or negatively. You’ll either choose an Angel or a Devil for your response, and your decision will determine your overall reputation. You can choose to go full negative and the media will call you out on it, or you can be a nice guy and the media give you nothing but praise. There are also press events where you’ll be given these opportunities and will choose between multiple answers to a given question. It’s an interesting aspect that adds a second layer to the overall career path. 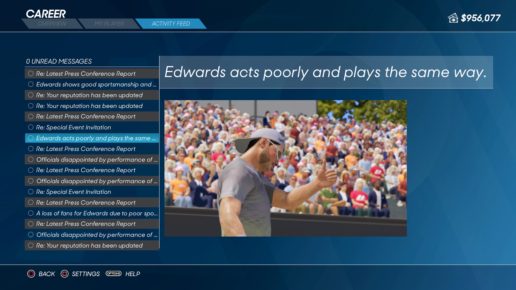 AO Tennis 2 is a community driven game, much like its predecessor, and gives you the tools to create your own players, venues, and even scenarios for others to try out. You can also download venues, logos and players other have created as well as scenarios from other players. The depth of the game lies within its many options coupled with a pretty deep career mode. For tennis fans, they couldn’t ask for much more than this.

Gameplay is your standard tennis play but if you are looking for an arcade style of play, stick to the Rookie difficulty level, because anything above that requires some skill. We found that the game is very unforgiving at the higher difficulties and you will have your butt handed to you if you are starting out with a basically skilled player. You might want to wait to up that difficulty once you have earned more than a few upgrades in your career, or you may never earn enough money to buy upgrades. 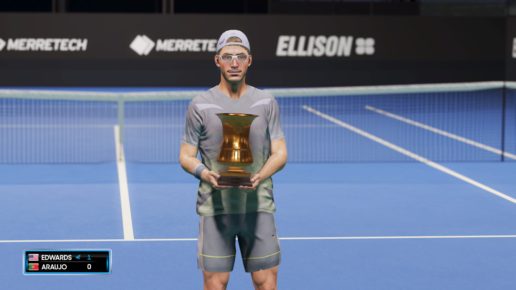 Developer BIG Ant Studios really listened to their fan base while working on their first tennis title, and then used everything they learned to create a much better game in AO Tennis 2.

AO Tennis 2 review code provided by publisher and reviewed on a PS4 Pro. For more information on scoring, please read What our review scores really mean.