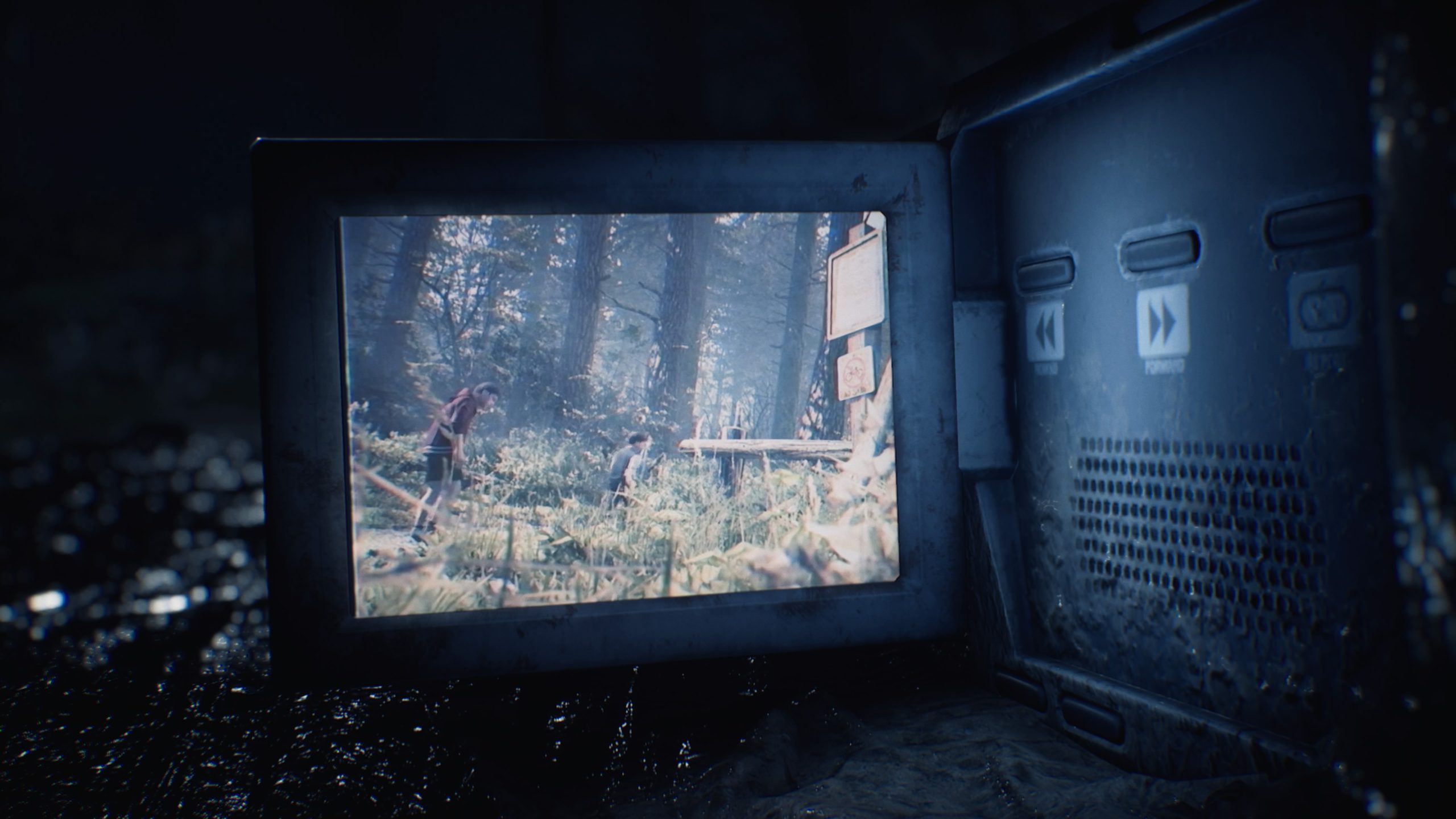 Developer Bloober Team has taken on the horror story of the Blair Witch and got us lost in the woods somewhere in the Black Hills forest near Burkittsville, Maryland. Did we survive the Blair Witch? Should you take the journey as well?

The Blair Witch Project has a pretty long history that goes back over 25 years. The ground breaking series gave birth to an entirely new genre of movies where purportedly found video footage was pieced together to form a narrative that shows how a story unfolded. The concept worked very well for horror stories and saw entries that not only included the Blair Witch series, but also couples getting lost at sea with a camera being found inside a dead shark. While the Blair Witch video game doesn’t take that same road, found footage does play into the game. More on that later. 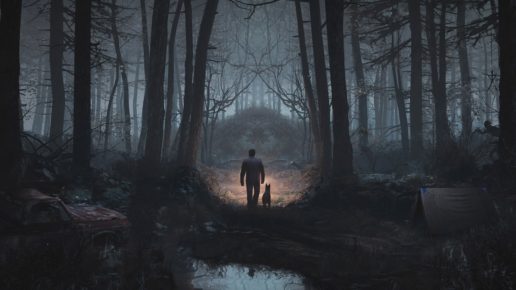 Into the Woods We Go

The Blair Witch game opens up in 1996, a couple of years after the events of the first movie. The game follows former police officer Ellis Lynch as he joins the search in the Black Hills Forest for Peter Shannon, a missing nine year old boy. Ellis brings along with him his service dog Bullet, who really is the highlight of the game. Ellis, we find out later, also served overseas and is a veteran of some distant war. He clearly suffers from PTSD, and this also plays into the overall narrative of the game. As a police officer he had also encountered some traumatizing experiences, so the guy is pretty messed up in the head and really should NOT be out in these cursed woods. Was he to blame for Peter’s disappearance? Does he feel guilty about something with the kid and that’s why he’s out there? Maybe?

The story, as told through flashbacks, found collectibles, and video tapes, is hard to decipher, exactly, and that kind of stays true to the Blair Witch series. The movies always left quite a bit open to interpretation and the game stays on that same convoluted path. As a horror game, the premise of the story works pretty well, albeit confusing as hell at times. With the time jumping and time manipulation, you may want to take notes for your second or third playthrough. Don’t feel bad if you have a hard time with the story, as we are pretty sure that is the desired effect. 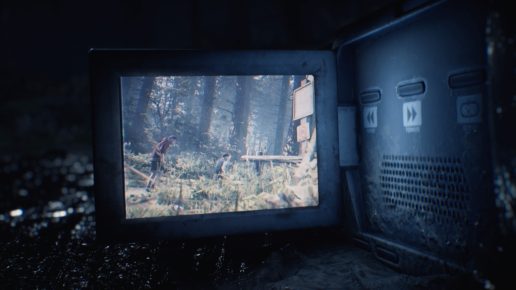 Gameplay and a Pretty Cool Camcorder

As you travel through the woods you’ll come across a lost camcorder and some lost video tapes. The videos depict things that have happened usually close to where the video was found. When the video is played, things in the video happen in real time around you, giving you the ability to alter your surroundings based on what is transpiring on the little screen and where the video is paused. If a door is shut and locked when you try to open it, take a look at a video and maybe you can pause the video with that particular door open, giving you access to whatever lies behind it. It’s a pretty cool concept that is executed nicely. 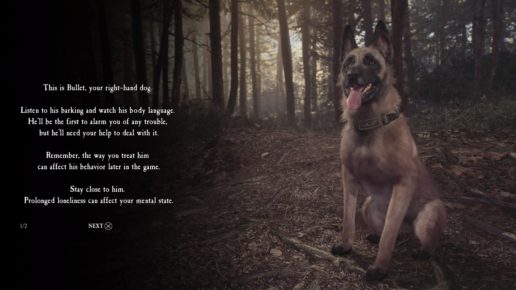 Ellis isn’t the greatest of video game characters, and it’s obvious he is in dire need of mental help, but one thing is for sure: Ellis needs his dog Bullet. Bullet becomes more than just a companion as the dog is a great tracker of lost kids AND hard to see monsters. The dog becomes key to nighttime scenarios where some sort of tree monsters are out to kill you. Your only weapon is a flashlight but it’s the dog that always knows where to shine it. Bullet can either see or sense these creatures, so when in a battle with them, keep a close eye on the dog and shine your light wherever he is looking.

Bullet needs some TLC, as all good boys do, so be sure to pet him often and don’t let him get too far away. Ellis really needs that dog close as he can go into a serious spiral if separated too long. Bullet has some simple commands that you’ll need to learn, but they really are simple, so no need to worry about anything too complicated. How Bullet’s story plays out will be determined by your actions throughout the game, so be sure to give that good boy plenty of affection.

Developer Bloober Team has a good history with horror titles and ultimately does a decent job with Blair Witch. The game doesn’t exactly fit within the same genre as the movies, but I’m not sure that would have helped the game if it did. Blair Witch doesn’t hold your hand, and will require you to figure out what’s next, but be not discouraged as Bullet will be there to help.

Blair Witch review code provided by publisher and reviewed on a PS4 Pro and PSVR. For more information on scoring, please read What our review scores really mean.