Thrustmaster recently launched a line of gaming headsets designed for Tom Clancy’s Ghost Recon Wildlands. We got to take the PS4 version for a spin and we were very impressed.

Read on to find out what we thought of them.

There are countless headsets available to gamers and they range in price from $20 and upwards to $300+. As a general rule when it comes to anything sound or audio related, you usually get what you pay for. While $20 for a headset sounds like a great deal, the quality will not be great, the sound will be mediocre at best, and you would probably be better off just using the ear bud that came with your PS4. On the other end of the spectrum, Bose makes what we can assume is a pretty awesome headset with their A20 Aviation Model that runs more than $1,000.

Thrustmaster has been putting out some quality headsets lately, with prices ranging from $50  for their Y-300CPX (our review) and up. The Y-350P Ghost Recon Wildlands Headset, which we are reviewing here, will run you $129.99 at NewEgg (no amazon links yet). While not exactly a low priced headset, the build and sound you’ll be enjoying will make you think you paid considerably more for them. Out of the box, the headset is a little hefty but feels like it’s built to last. The packaging is very protective so no need to worry about damage due to shipping and careless UPS or FedEx guys throwing things around. 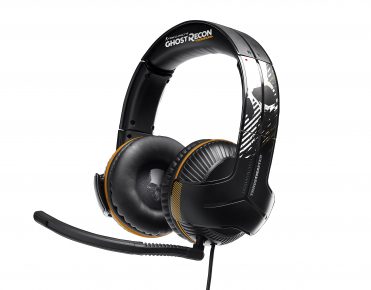 The headset is co-branded with Ghost Recon Wildlands (which we love and play daily) and a pretty cool Ghost icon on the side of it. The 60mm drivers inside of the memory foam headphones also have a Ghost icon and adds to the overall slick appearance to them when not in use. These are display worthy, all the while being some of the best sounding headphones available. These are sturdy and well built but might be a little heavier than what you are currently using. We were using the HyperX Cloud White headset for a while but these have now replaced them as our go-to headset. The reason being, the directional 7.1 surround sound and how well the sound isolation works.

The sound with the HyperX was great, don’t get me wrong, but with a game like Ghost Recon Wildlands, pinpointing exactly where a sound is coming from is paramount to survival. Thrustmaster achieves this with the Y Sound Commander: A control panel that plugs directly into the Dualshock 4 with 7.1 Virtual Surround Sound technology that allows gamers to precisely pinpoint the direction of each sound, ensuring maximum immersion on the battlefield. It also includes a bass power adjuster and volume adjuster with status lights for both. Add in the well cushioned, memory phone covered ear pieces and head rest, and the mic that only picks up your voice, and you’ll have a great headset for any PS4 game.

The Y Sound Commander also has an in-line, rechargeable battery built into it to give your headset the power boost it needs for that extra base and 7.1 surround sound. No charging cable included, but you can charge it the same way you charge your Dualshock 4. When we first started using it, prior to hitting that 7.1 button, the sound was great but we didn’t realize how much depth was missing until we activated it fully by pressing that button. The only thing missing is better way to differentiate between in-game sounds and chat. Luckily the PS4 has that option so you’ll have to play with it to get the balance between the two where you like it. Playing solo in GRW, we found ourselves cranking the audio up while sneaking onto a base that had jammers that made our drone useless. You could hear the bad guys breathing their last breath before taking them out.

When folks say you get what you pay for, they generally are saying be prepared to pay a bunch of cash. With the Thrustmaster Y-350P Ghost Recon Wildlands Headset, you’ll feel like you’ve spent a bunch more cash than you did.

Awesome job Thrustmaster and thanks for sending us our new, everyday headset.