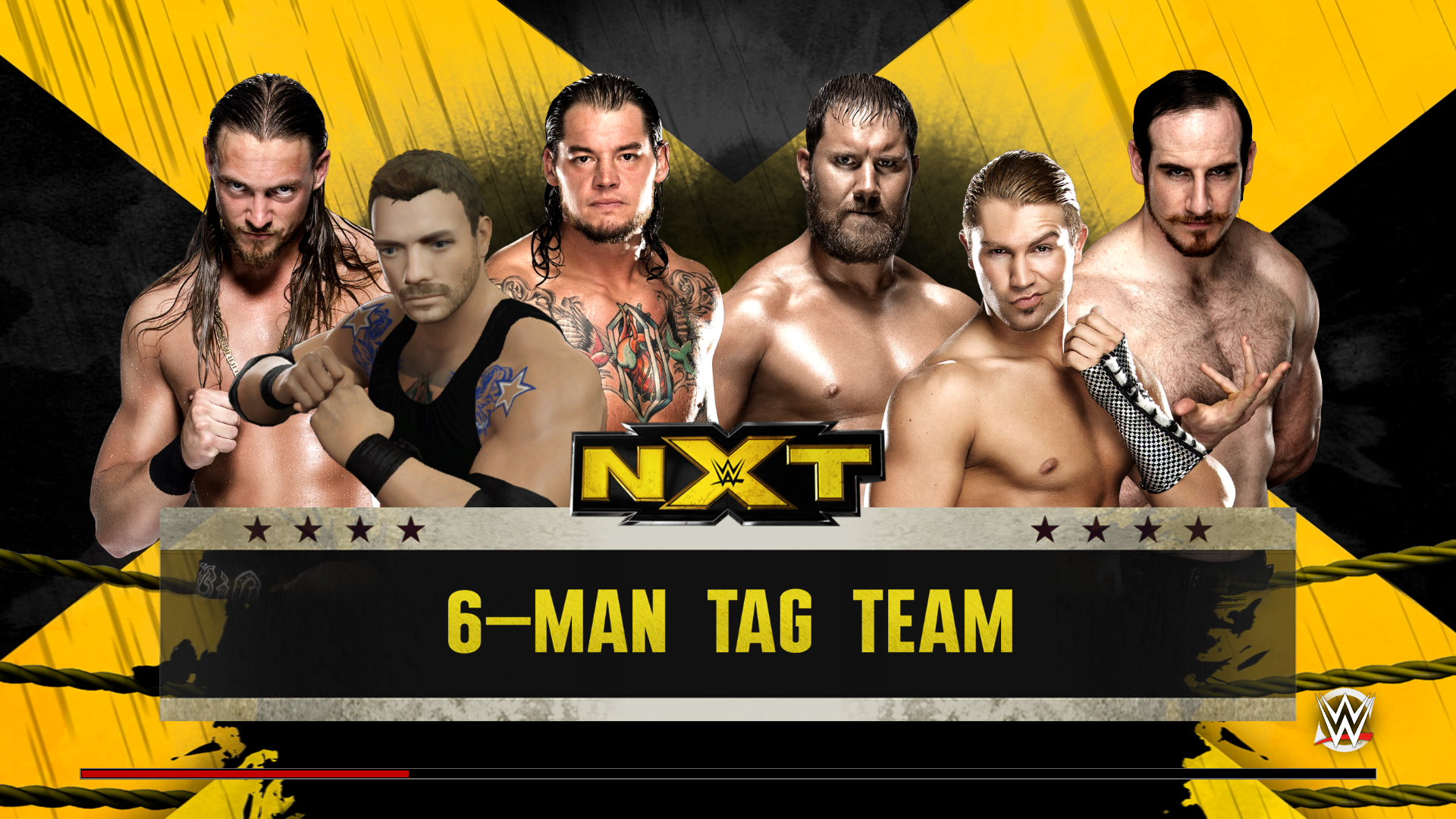 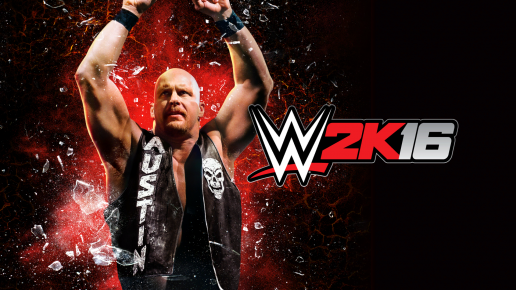 WWE 2K15 left a lot to be desired for wrestling fans expecting great things for the first appearance of WWE on NextGen Platforms. Does WWE 2K16 meet those expectations, or is it best left to linger in a neutral corner?

WWE 2K15 wasn’t a bad game, but at the same time it wasn’t a great game either. Being reworked for the next gen platforms had its pluses, with improved graphics and animations, but it felt like most of the focus was on the that and very little focus was spent on actual gameplay improvements. In the long run, it turns out that they laid the groundwork for what is the best WWE game released, like ever, with WWE 2K16.

The best place to start with the game is in career mode as this will introduce you to the new aspects of the game and has the only real tutorials to be found. Player creation is pretty in-depth, and you can even try to add your own face onto your character using the new Logo system, but we didn’t have much luck making our character look like us. Instead of using a system like EA does with their NBA Live and FIFA series, that scans your face and does all the work for you, you’ll have to import your image, slap it on your character’s face, and then adjust the facial features to fit the image. It takes a lot of work and we never did quite get it right, but at least it’s an option. If you’re going to add something like that, though, why not have a somewhat automated system that at least gets you going in the right direction? 2K had a great idea here, as we would all love to get our own likeness into the ring, but the execution is terrible. I’m not saying they should copy EA’s capture app, but really, they should at least try to mimic it.

The player creation tools go well beyond just facial features, as you can create a base character in a given weight class, and then adjust him or her however you want them to look physically. Buff, fat, skinny, short, tall, massive, it’s all up top you and you can make them look oddballish or perfectly asymmetrical, with muscles in all the right places and all the right sizes. Body art options are many, and you have a ton of tattoos to choose from for almost every area of the body. Once you have the face and body the way you like them, clothing options are deep as well. You could easily spend an hour or more creating your perfect and totally unique superstar with all of the options available to you.

Once you are happy with your superstar, head over to the W Performance Center and you’ll learn some of the new aspects of gameplay. Where WWE 2K15 had unlimited reversals and tended to turn every match into a battle of timing, but WWE 2K16 limits those reversals and makes you learn how to be more strategic with them. Timing is still a huge key to being successful with them, but since you are limited in your reversals, you can’t just try to reverse every attack. Sometimes it’s better to take a body slam and wait for your opponents stamina to drop, and then return the favor with your own attack. The flow of the matches mimics real-life situations now, and getting slammed is just one of things that’s going to happen to wrestlers, so you might as well embrace the pain.

During your first match you’ll also be introduced to the new submission system. No more button mashing for submissions as it now uses the analog stick to move your area inside a circle either trying to stay on top of your opponent’s area if you are the aggressor, or trying to stay away from their area if you are the one being held down. You can boost your movement with a shoulder button press, but this system is very difficult to master and seems to benefit the AI unevenly. Even if you’ve beat the crap out of the guy, the AI is still very hard to counter using this system and it could definitely use some post release tweaks. The hold system uses the analog stick as well but feels much more balanced overall than the submission system. 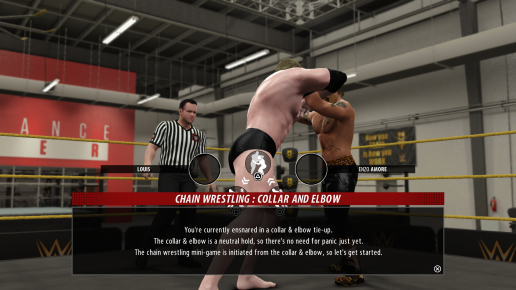 Locking up with an opponent got reworked a bit as well and now uses a rock-paper-scissors style of gameplay. When locked up you’ll have a small window of time to choose between three buttons, where let’s say circle beats triangle and triangle beats square but square beats circle, with the winner getting an advantage in the outcome of the hold.  It’s a pretty cool take on Ro Sham Bo and an interesting way to decide who gets the upper hand in a given situation.

Once you have been beaten down and your opponent decides to try and pin you, the pin system was reworked a bit to make it flow a little better. You’ll have three chances to kick-out by using a circular meter where you’ll have to time your button press by hitting it when your cursor lands in the blue area of the meter. How fast that cursor moves and the size of the area is determined by your health and stamina, but if one is fast enough, they could make a match last a long time. 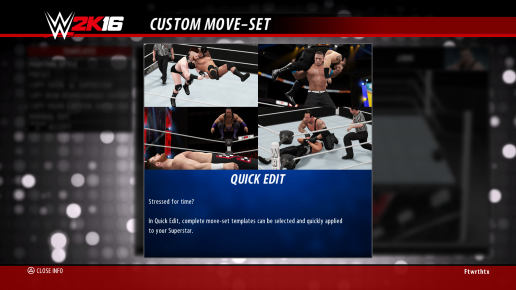 Career mode starts out slow but picks up speed as you get a tag team partner and end up with a rival. Your career starts you out as a rookie working towards the NXT Championship. You’ll start out as being ranked ten and will slwoly work your way up the ranks, until you finally get your shot at your first belt. Before jumping into that first match, you’ll want to check out your character’s move set, and pick moves that you’ll feel comfortable pulling off in a match. You can spen a lot of time here finding a set that works for you, but really this is the bread-and-butter of the game, as this move-set is what you’ll need to learn in order to be successful. You can come back and change it later if need be, and i really wish there was a free practice mode to try out all of the different moves for your character.

Once you are involved in a match, you will be rated on your performance on a five star scale. The more varied and successful your attacks, the more stars you’ll earn and the more skill points and virtual currency you’ll earn. VC and SP are the key to making your character be the best possible wrestler he or she can be. Use these to upgrade your skills, abilities and attributes. You can also add a manager to aid you ring side by distracting the ref at key moments in a match to maybe give you a window of opportunity to do some not-so-legal moves. The career will be a bit of a grind if you run the entire fifteen years and work your way into the Hall of Fame, but it’s a fun grind with plenty of excitement. 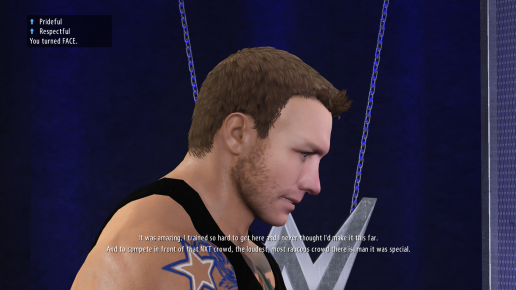 After matches you’ll be interviewed where your responses will help determine the path your career will take. After each question by the interviewer you are given multiple choice answers to pick from. Answer respectfully and nicely and you’ll earn a Face rating, but be a total butthead and you’ll be marked a Heel. The questions can also work towards creating tension between you and a rival, with that rival eventually ambushing you while you are walking into a separate match. You are later tasked with returning the favor and ambushing him as he enter his own match, and the rivalry goes up a few notches. Once a rivalry has ended, you can then choose to run-in on any fighter on a given fight card and start another rivalry, with interview questions after to help stoke the fires.

Gameplay works extremely well in one-on-one matches, with very smooth and realistic animations that go great with the solid graphics on par with any other sports title around. Throw several folks into the ring at once, though and you may find yourself smacking the wrong guy around. The targeting system never really locks you onto an opponent so if you’re in the middle of a tag team match and your buddy is getting beat down, jumping into the ring and smacking the opponent around can get interesting and can hinder more than help if you accidentally smack your buddy around instead. This really gets interesting in a Battle Royal where you have a dozen guys fighting each other. This area could use some post release tweaks as well. 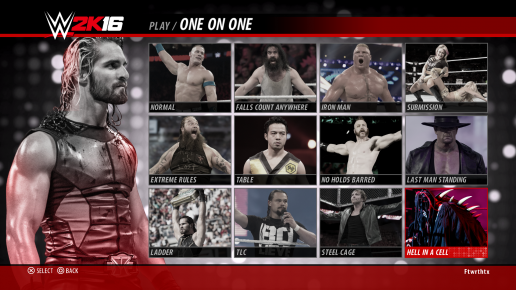 The franchise’s popular story-based mode, 2K Showcase, returns in WWE 2K16. This gives you the chance to relive iconic matches and moments in WWE history, starting with Austin 3:16 as you fight as Stone Cold against several other classic opponents.. Along the way, there’s video packages featuring classic WWE footage and complete objectives to unlock legendary characters, entrance and ring gear, match types and other unlockable content.

Online play hasn’t exactly been flawless for us, as we have had a few connections issues, but once connected it is just as much fun as playing against a buddy on the couch. While waiting for a match, you’ll even get a chance at some free-practice time (why not have this available offline just to practice and perfect your moves?). We pitted Arnold Schwarzenegger and Andre the Giant in a match that seemed to last forever. The kick-outs and rope grabs, coupled with the no-rules match made for a lot of fun. 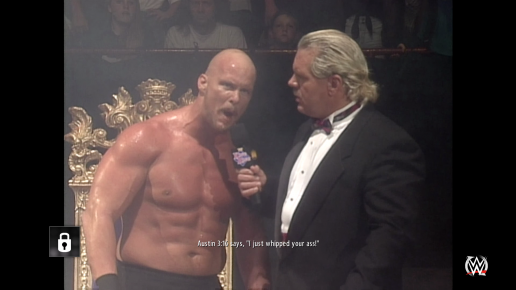 The WWE series of video games have been around for some time but never before has any of them had this many different wrestlers to choose from. Never before have the animations, attack positions, and realism been recreated in a virtual world with such emphasis on them. While WWE 2K16 isn’t without its flaws, it is the best WWE game to date.