NIS America is bringing another Japanese RPG to the shores of North America and Europe. Is it worth of the import or should it have stayed in Japan?

Our favorite Undisputed God of the Universe, Chou-Chou, returns with her crew for a brand-new story revolving around the zodiac. Mugen Souls Z takes place immediately after the first game, you take control of the goddess Sylma, who meets Chou-Chou before the end of the first game’s events. Sylma is out to stop an ancient threat to her world that has recently awakened. 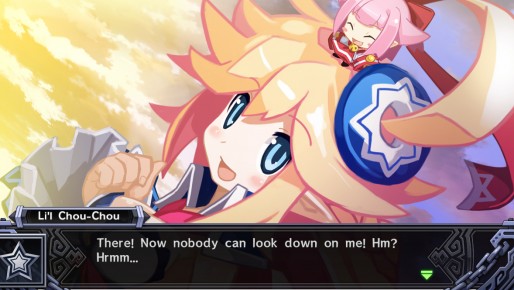 The story opens with Lady Chou-Chou who, just finishing her quest of taking over the seven worlds of the rainbow colors, finds out there is another galaxy with 12 worlds in it. She being the undisputed god of the universe, knows she must take over these new twelve worlds so as to maintain her undisputed standing, so she gathers up her peons and gets busy.

JRPG’s are known to have quite a bit of dialogue and Mugen Souls Z stays true to form. The game is very dialogue heavy, and if you want to know the full story, you’ll probably want to take the time to read through most of it. If you just want to play the game you can skip through the dialogue rather quickly by pressing R2 or square. You’ll be skipping a few funny jokes, though, and the dialogue is key to understanding the story, so you may want to just read through it anyway. 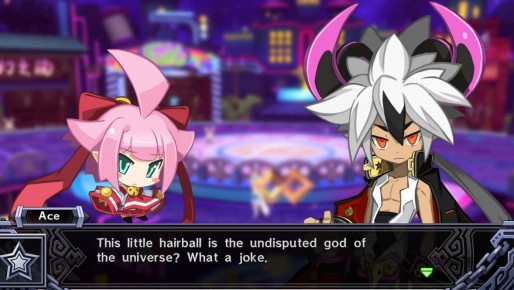 The storyline for the game is decently written but is catered to a specific audience, as most JRPG’s are. Fans if this genre will enjoy it and will find humor with the ribbing of games from other similar franchises like Disgaea. The game turns around and does exactly what they are ribbing the other games for doing, though, but they are all JRPG’s and that’s what they do. It’ s not a bad thing if you’re a fan of this genre, and you wouldn’t be playing this game if you weren’t.

Gameplay is separated into several different areas. Your exploring screens give you the chance to purchase upgrades, weapons, and clothes, each with their own set of stats that can improve your attack or defense skills.As you play through the game and earn skill points, you’ll be able to create new peons, or helpers. 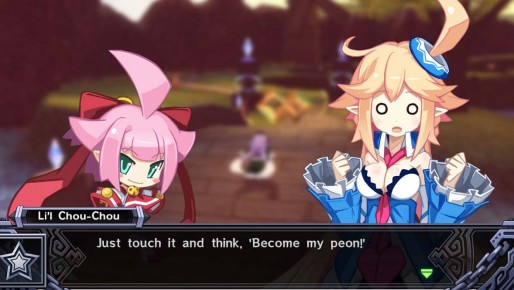 Battles use a turn based system where you can move around on a limited battlefield and then attack enemies close to you. The battle system becomes very complex as you play through the game but there is also a lot of explaining about exactly what all of the mechanics do from the Explanatory Shampuru. This is a very useful help system that can teach you the ways for a successful battle.

Chou Chou is a charming young lady, literally. She can charm her enemies by saying one of three Moe Kill phrases which has a varying effect depending on which of her eight personalities she is currently displaying. Did we mention she was also schizophrenic? Her main personality is called Ego but there are also Ditsy, Hyper, Sadist, Masochist, Bipolar, Graceful, and Terse. If her enemy happens to prefer a Gothic character then she needs to be in Terse mode and her phrase will be amplified. The game gets very complex but help is always just a button press away and that is a must if you want to master all of the tricks of the game. Battling bosses will require multiple tactics and techniques, so learn as much as you can. Battling monsters, and a handful of smaller baddies, can be an overwhelming experience, but if you learn the battle system, you’ll be kicking ass like a pro in no time.

With the game’s initial launch in Japan turning some heads due to its inclusion of some questionably young characters and sexual situations, the US and European releases were edited a little. JRPG’s are known to walk a fine line between sexual impropriety and down right pedophilia, and the usage of young looking girls is cause for concern. A couple of these scenes were removed from the game for it’s secondary release, but there are still a few scenes that might make you uncomfortable. The graphics for the game are nicely done with very detailed characters and worlds. The dialogue screens are the best looking part of the game and the hand drawn characters are exactly what you would expect from NIS America. Once in battle the graphics do go down a little in quality, but definitely not to the point of meh. It’s still a good looking game regardless. Monster design is by far the most creative and detailed creatures we’ve seen, and just getting to see a new monster may have you anticipating your next battle.

The audio for the game gives you the option to use either English or Japanese dialogue, but don’t expect speech animations to match the words being said. We always read the text anyway, so that’s not something that bothers us. What did tend to bother us, though, is when in a battle, each character says the exact same thing when it is their turn to act. This is just an annoyance and doesn’t take away from the game, but if we could somehow shut that character up, that would be great. 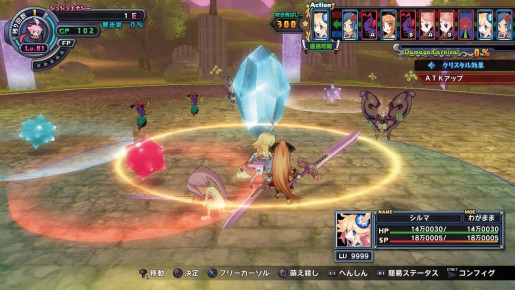 The soundtrack for the game is OK, but not something we would add to our personal music player. The music tried to match the mood of the game, and did a decent job of it, but it just wasn’t all that special. This is kind of surprising for this genre of gaming as most include the soundtrack as downloadable DLC.

For fans of JRPG’s, this game is great. For those of you not fans, you may still find some enjoyment. NIS America was smart to import this overall fun game.