Princess Merida, the strong headed lead character from Disney•Pixar’s latest movie release, makes the jump from the big screen to the video game world. Is this another movie-tie-in bomb, or does it live up to the Disney•Pixar standards?

The story opens up as Princess Merida is arguing with her mother, Queen Elnor. The strong headed young princess is unhappy with the outcome of the argument and runs to a witch in search of a way to take out her frustrations on the queen. The witch gives her a cursed snack, which she in turn gives to the Queen, and unintentionally also gives to her three younger brothers. Merida had no clue as to what the curse would do, and is shocked when she sees her mum turn into a large bear. Her mum runs off with a wild animal look in her eyes, and it is up to Merida now to somehow reverse the curse and return her mum and three brothers back into humans.

She quickly learns that there is another problem facing her as well. Mor’du, the beast that took one of her father’s legs, has cursed the land and she must defeat his beastly minions, and eventually him, in order to cleanse the world and magic runes of his curse.

Game play is a mix of platforming, puzzles, and fighting with a nice mix of RPG elements that are used for upgrading weapons and abilities. The game starts out in a Stonehenge like central location, called The Circle of Stones. As each level is completed, the next one opens up. Levels can be revisited if needed. A second player can jump in and play co-op anytime, taking the form of Will O’ the Wisp.

Merida has to find four special charms along her journey that enhance her combat abilities. The four charms represent the four basic elements of the world: Earth, Wind, Fire, and Ice. The enemies she faces are susceptible to one of the four charms, and a matching icon above their head lets you know which one works the best against them. Learning how to recognize this icon, and being able to switch between the charms quickly, becomes a major key to defeating multiple types of enemies at once, and your very survival hinges on this ability. The environment also requires use of these charms, and icons show you which charm is needed in order to activate different objects. 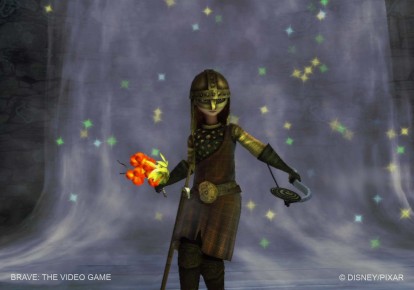 Occasionally you will find yourself greatly outnumbered and your mum, in her current cursed bear form, will come to your rescue. She can swipe, pound, and charge her way though large numbers of enemies in little time. Even on the hardest setting, she is almost invincible and a very effective destructive force.

When confronted with an occasional puzzle, you’ll find that your three little brothers, Hamish Hubert and Harris, in the shape of cute little bear cubs, lend themselves to helping you solve them. While the puzzles aren’t difficult, they are well thought out, and might take more than a few minutes for the younger crowd to get through. You’ll have to switch between the three brothers in order for each of them to complete a specific task. The very creative puzzles give a nice break from the destructive action, and make the game more enjoyable.

Throughout each of the six levels of the game, you will come across chests that contain special items. Some are swords or bows that increase your attack strength and others are tapestry pieces that increase your overall health and defense. New outfits for Merida can also be found, but have no impact other than visual on the game.

Also along your journey you can collect gold coins. These come from plants, logs, tree stumps, and defeated bad guys. These coins are then used at a freshly cleansed magic rune to purchase upgrades to Merida’s four charms as well as her and Will O’ the Wisp’s abilities. With thirty six different upgrades available, completionists will be playing through levels multiple times in order to purchase them all. 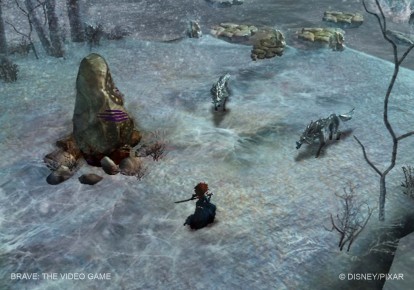 Level design is very linear, but an occasional offshoot will need to be taken in order to find all of the chests in the game. There are also containers holding a large number of gold coins scattered about, and these can be hidden as well. Each level is designed well and include sunny environments, frozen highlands, caves, and volcano like environments. Levels are detailed nicely, and add greatly to the overall experience.

The graphics for the game are top notch most of the time, but occasionally we noticed the frame rate getting choppy. That in no way made the game unplayable, and it was mainly when there were a large number of enemies on the screen at one time. The game ran smooth most of the time, and looked almost to Pixar levels.

The seven to eight hour story is told through storybook style animations, and is well written and well thought out. The game does expand on the movie based story, and fans of the movie will appreciate that. The soundtrack from the game is definitely a high point for the game. The music is uplifting at times and resonates with the sounds of Scotland. The real voice actor from the movie, Kelly Macdonald, also voices her character in the game. A very nice touch that helps add authenticity to a movie based game.

Added for the PlayStation 3 and Xbox 360 are some archery mini-games that require the PlayStation Move controller or Xbox Kinect. There are three types of games to play, but they really don’t add too much to the overall game. They are fun for a little while, and you can earn some gold coins, but you probably won’t be spending too much with this mode.

Disney Interactive did a great job of creating a movie-ti-in video game that feels like more of an extension of the movie, and less of a plot rehash. Well thought out level design, creative puzzles with memorable characters, and a rousing soundtrack, make this a video game that can stand alone from its big screen counter-part, or go hand in hand with it.