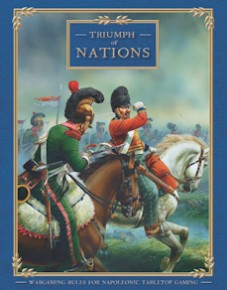 A comprehensive guide for players to recreate Napoleon’s famous battles

With the help of authors Terry Shaw and Mike Horah, and illustrator Peter Dennis, Slitherine have created an in-depth and beautiful resource that players can utilize to assist in recreating battles from 1812-1815. From Napoleon’s disastrous and devastating invasion of Russia to the glorious Hundred Days War, players will have access to the all the army lists and details.

About Field of Glory – Triumph of Nations

In 1812, after a period of considerable victories, Napoleon found himself fighting on two fronts, suffering setback after setback. With his forces in Spain being pushed back, Napoleon launched an invasion of his former ally, Russia, leading the half-million-strong Grande Armée to Moscow, eventually suffering a brutal defeat at the hands of Russian forces and the bitter winter conditions. Now on the defensive, Napoleon was defeated and exiled, but returned to lead his loyal armies against a coalition of European nations in a final campaign that culminated at Waterloo.

Triumph of Nations, a companion for Field of Glory Napoleonic, provides players with all the army lists and details they need to recreate the battles of the later Empire, from the disastrous invasion of Russia to the glorious Hundred Days.

Slitherine Ltd. are the world’s leading video games producers and publishers of historical and strategy titles. Since 2000, both brands have published literally hundreds of games with many award-winning titles in their portfolio spanning all digital and console platforms. Slitherine is also involved with book publishing, and board gaming and work with a wide array of key licensing partners such as HISTORY™, MILITARY HISTORY™, Horrible Histories™, Showtime, BBC, Osprey, Scholastic, Casemate Publishing and many others to deliver the best blend of historical accuracy in an exciting and entertaining way. The two companies merged in May 2010 and formed the world’s largest organization specializing in this niche but important market sector. Slitherine’s mission over the coming years is to lead the way in innovation and growth in this expanding industry sector.