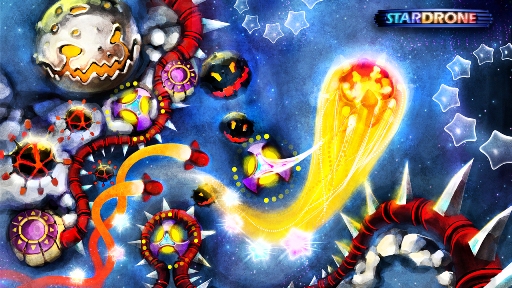 Beatshapers’ Stardrone is releasing today on the US PSN. Should you download it, or just let it fly on by? Read our review to find out.

StarDrone is a high-speed action thriller with a mix of arcade action, pinball, breakout, physics and collect-the-objects. You can play either with your Move controller, or your Six-axis controller, but this game shines when using the PlayStation Move.

Game play consists of having your ship shot out of a cannon, and then piloting it using a grappling line to attach yourself to spinning beacons that are spread out around each level. Your ship is always in motion and it’s the beacons that will direct your path. Grab a beacon, and its rotation will launch you in the direction it pulls you. Your projected launch path from each beacon will show you where you’ll be headed, and this really comes in handy. Trying to guess your projected path would make this game extremely difficult.

The goal of the game varies from level to level. You’ll start out by lighting up stars on the screen by touching them. Fill up a combo meter at the top of the screen and you’ll turn into a comet that can blast through objects. Other levels will have you to collecting items that are used to fill different types of shapes.

There are 53 unique levels in all. They are well designed and look great. Each level has a mini-map that shows up on the lower left. This comes in handy for finding anything you’re missing. The levels vary in design from simple (but treacherous) to complex and large. It’s obvious quite a bit of work went into level design. For those of you with 3D TVs, there is a patch in the works to support 3D, but it’s not available yet.

As you complete levels, you are awarded based on your time of completion. There are Bronze, Silver, and Gold medals, but you’ll have to be pretty quick to earn them. Practice makes perfect, as they say, and some levels take quite a bit of practice to master. For the competitive folks out there, your best times and scores are posted to a leader board. This adds some replayability to the game, since you can track how your friends are doing on each level.

Decent PlayStation Move compatible games have been few and far between, and most have been awkward and gimmicky at best. As more and more developers start putting out games that use the Move controller, we have to start worrying about the dreaded ‘shovelware’ games. Games that are just thrown together in hopes of catching on the motion control wave. It’s safe to say that Beatshapers didn’t make any shovelware here, as this game truly shines when using the Move controller. Precision controls, coupled with the ability to calibrate at anytime, makes this game one of the best Move games around.