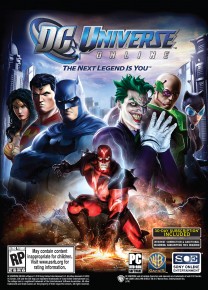 Beginning late October, players will be able to download and access DCUO for free on both the PlayStation®3 computer entertainment system and PC. As part of this transition, SOE is introducing three new access levels to the game: Free, Premium and Legendary. All three levels will provide access to open world gameplay and missions, general game updates and fixes to the game, with each level offering different game options and benefits.

“When we launched DC Universe Online, we introduced a very different brand of massive online game driven by fast action combat to PC and PS3™ gamers and with that, we discovered a new type of online gamer,” said John Smedley, President, Sony Online Entertainment. “We’ve listened to our community, and we’ve determined that the free-to-play model is the best fit for DC Universe Online.”

Smedley added, “Our philosophy embraces learning from our experience and as a pioneer in the free-to-play space with proven successful games like Free Realms and Clone Wars Adventures, we believe this new model will expand the DCUO experience and offer more options that cater to every type of player so they can play the game in a way that fits them.”

All three levels provide access to the current game, but allow differing tiers of convenience and flexibility. The levels are:

More information on the DCUO free-to-play access levels can be found here: www.DCUniverseOnline.com/free.

DC Universe Online combines immersive environments and fascinating story arcs with fast-paced, physics-based combat, allowing players to pick up buses and other objects in the environment, fly into the air and throw them at enemies; run up the sides of buildings to engage in melee brawls while shooting flames of fire from their hands; or cling to the side of buildings while using a grappling hook to pull flying opponents out of the sky – all while fighting alongside or against the legendary characters of DC Comics and charting their own path to legendary.

Lex Luthor has traveled back through time with news of a dire future: While the heroes and villains spent years battling amongst themselves, Brainiac has been feeding on their powers, building strength to return to Earth and destroy humanity. To change the future, Lex has come back to set off a device that bestows super powers to thousands of every-day citizens and give humanity a fighting chance. Can Brainiac be stopped, or is this another nefarious Lex Luthor plot?

For the first time, players and fans will be able to enter the DC Universe as an active force for good or evil. A massively multiplayer experience, DC Universe Online delivers unparalleled high-energy, physics-powered combat that brings the player’s extraordinary powers to life.

DC Universe Online was created in the artistic vision of legendary comic book artist Jim Lee, and set within a world created by famous DC writers including Geoff Johns and Marv Wolfman.

Rated T for Teen with Mild Blood, Mild Language, Mild Suggestive Themes and Violence, DC Universe Online is available for PC and PlayStation®3 computer entertainment system. DCUO Legendary access will be available for a $14.99 monthly fee.  For players of the PC version of the game, Legendary access to DCUO is included in the all-in-one SOE All Access subscription.

SOE, the SOE logo, EverQuest, Champions of Norrath, PlanetSide and Free Realms are registered trademarks of Sony Online Entertainment LLC. All other trademarks and trade names are properties of their respective owners. All rights reserved.

Warner Bros. Interactive Entertainment, a division of Warner Bros. Home Entertainment Group, is a premier worldwide publisher, developer, licensor and distributor of entertainment content for the interactive space across all current and future platforms, including console, handheld and PC-based gaming for both internal and third party game titles.

DC Entertainment, home to iconic brands DC Comics (Superman, Batman, Green Lantern, Wonder Woman, The Flash, etc.), Vertigo (Sandman, Fables, etc.) and MAD, is the creative division charged with strategically integrating across Warner Bros. and Time Warner. DC Entertainment works in concert with many key Warner Bros. divisions to unleash its stories and characters across all media, including but not limited to film, television, consumer products, home entertainment, and interactive games. Publishing thousands of comic books, graphic novels and magazines each year, DC Entertainment is the largest English-language publisher of comics in the world.