BioShock 2 is a great game. Masterfully crafted by 2K Marin, it retains the atmosphere that made BioShock such an innovative and stunning exploration in 2007 while also telling a story that adds to the lore of Rapture, the city under the sea in which BioShock takes place.

BioShock 2 tells the story of Subject Delta, the original Big Daddy. Forced to kill himself at the beginning of the story, he awakes from his wounds ten years later, still alive though uncertain about his past. As Subject Delta you have to explore Rapture’s crumbling ruins to try and find your daughter, Eleanor.

Subject Delta is a Big Daddy, but he isn’t much more powerful than your character, Jack, from BioShock. He does, however, have the unique ability to wield both a weapon and a plasmid power at the same time, allowing you to shock, freeze, burn or perform any other manner of plasmid attacks on your opponents while also using a more conventional weapon. This ability to multitask is greatly needed as vast numbers of Splicers, the crazed, plasmid-addicted inhabitants of Rapture, attack you constantly. They are tough opponents, talented with guns and grenades. They lunge at you with heedless abandon (Thuggish Splicers), run and seek cover and shoot at you (Leadhead Splicers) and even crawl along the ceilings and throw hooks at you (Spider Splicers). You will often find yourself in tough battles against numerous opponents and that is especially true when protecting your Little Sister. 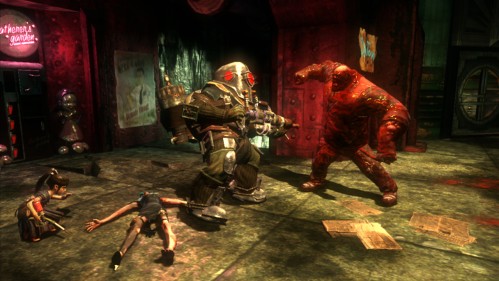 Throughout the game, you will have the opportunity to fight Big Daddies and either harvest or rescue the Little Sisters. If you choose to rescue them, they ride on your shoulders until you find a body filled with Adam. You are lead to the bodies by a wisp of a trail that floats in the air, showing you where to go. At which point, you have to prepare. Splicers will attack in hordes when you place your Little Sister down to gather ADAM and this is when weapons such as Trap Rivets come in handy as you can kill Splicers before they ever reach you or the Little Sister. When the Little Sister is finished harvesting ADAM from the body you will receive a large amount of the vital substance which is used to purchase Plasmid upgrades. Each Little Sister can harvest from two bodies before she must be returned to the air vents scattered around Rapture. When returning her you can choose to either harvest her – allowing you to gain a huge amount of ADAM but sacrificing yourself morally – or you can rescue her and free of her of her dependency on the substance. The manner of dealing with Little Sisters is much improved in BioShock 2. No longer is there an equal reward for rescuing Little Sisters versus harvesting them. If you harvest them you certainly will gain more ADAM and become more powerful, but if you save them you must gain ADAM only after long fights against hordes of splicers. The difficulty in procuring ADAM makes the decision on how to handle the Little Sisters more difficult than in the first game because there is a clear benefit to harvesting them. Though, it should be noted that there is also ample reward for taking your time to rescue each of the Little Sisters that you come across. 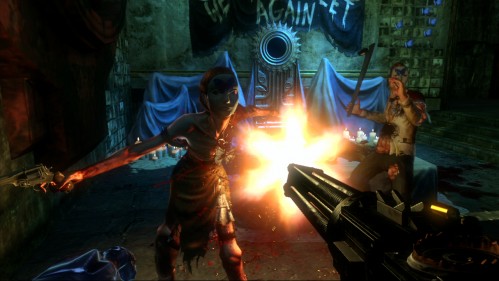 Along the way, you will encounter a vicious new enemy that does not like it when you use the Little Sisters. The Big Sister is an adolescent Little Sister, all grown up and ridiculously powerful due to all the ADAM she’s consumed. They are tall, strong and have a variety of Plasmid powers at their control. As they approach, they claw at walls, causing a shrieking to emanate throughout Rapture and you have to steel yourself for an impressive fight. These are some impressive baddies and each fight is nerve-wracking beyond belief.

BioShock 2 features the same stunning world of Rapture, a devastated city built underwater. Set a decade after the first game’s events, BioShock 2‘s world is slowly coming apart. Water pours in through huge holes in the ceilings and whole areas of the city can become flooded. As a Big Daddy, you are able to walk underwater and you even have several opportunities to explore the outside of the city, the most remarkable experience being the first, where you emerge from a cave to see the city sweeping out beneath you from high on an underwater cliff. It’s unfortunate, though, that the underwater portions weren’t more prevalent in the game because they are beautiful and offer a wonderful respite from the tense, horror-filled moments that frequent the hallways of Rapture. 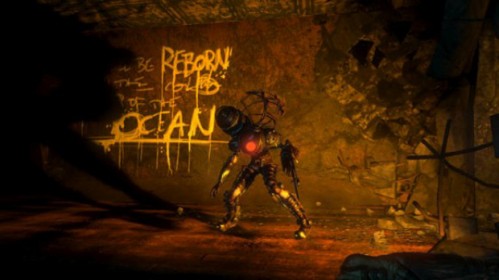 If you are new to the BioShock series, Rapture will undoubtedly be an awe-inspiring spectacle, but if you are returning once more to this underwater city, then you might feel deja-vu at the beginning of the story. The opening sequences of BioShock were stunning because the scenes were brand new. An underwater city, horrifying splicers leaping on top of the bathysphere you ride in on and the crumbling, fading art-deco architecture all shocked the senses. However, while it all feels too familiar at the beginning, BioShock 2 differentiates itself from BioShock by bringing in new enemies, a fascinating story and more of that amazing atmosphere. Rapture is still an intriguing place to visit.

In addition to the single player game, BioShock 2 includes several multiplayer modes, all of which are quite unique and entertaining. The action is fast-paced and furious and it all takes place in a Rapture just at the beginning of the civil war that tore it apart. The locales are familiar yet vastly different in their unharmed state and while the main attraction of BioShock 2 is undoubtedly it’s single player storyline, the multiplayer adds fresh gameplay by including the use of plasmids in addition to weapons. The plasmid combinations used throughout the multiplayer forays are entertaining to experiment with and deadly when crossing an experience plasmid user.

BioShock 2 is not the mind-blowing experience that BioShock was, but it is an outstanding game experience nonetheless. There was no need to return to Rapture, but 2K Marin have managed to make a game that adds to Rapture’s lore and changes things enough to make a second trip worthwhile. The combat is greatly improved thanks to dual plasmid and weapon wielding and the game offers treats throughout the game that are geared towards those who completed BioShock‘s story. The multiplayer isn’t perfect but it does complement the single player experience remarkably well and adds longevity to this adventure.

+ References to the first game’s events 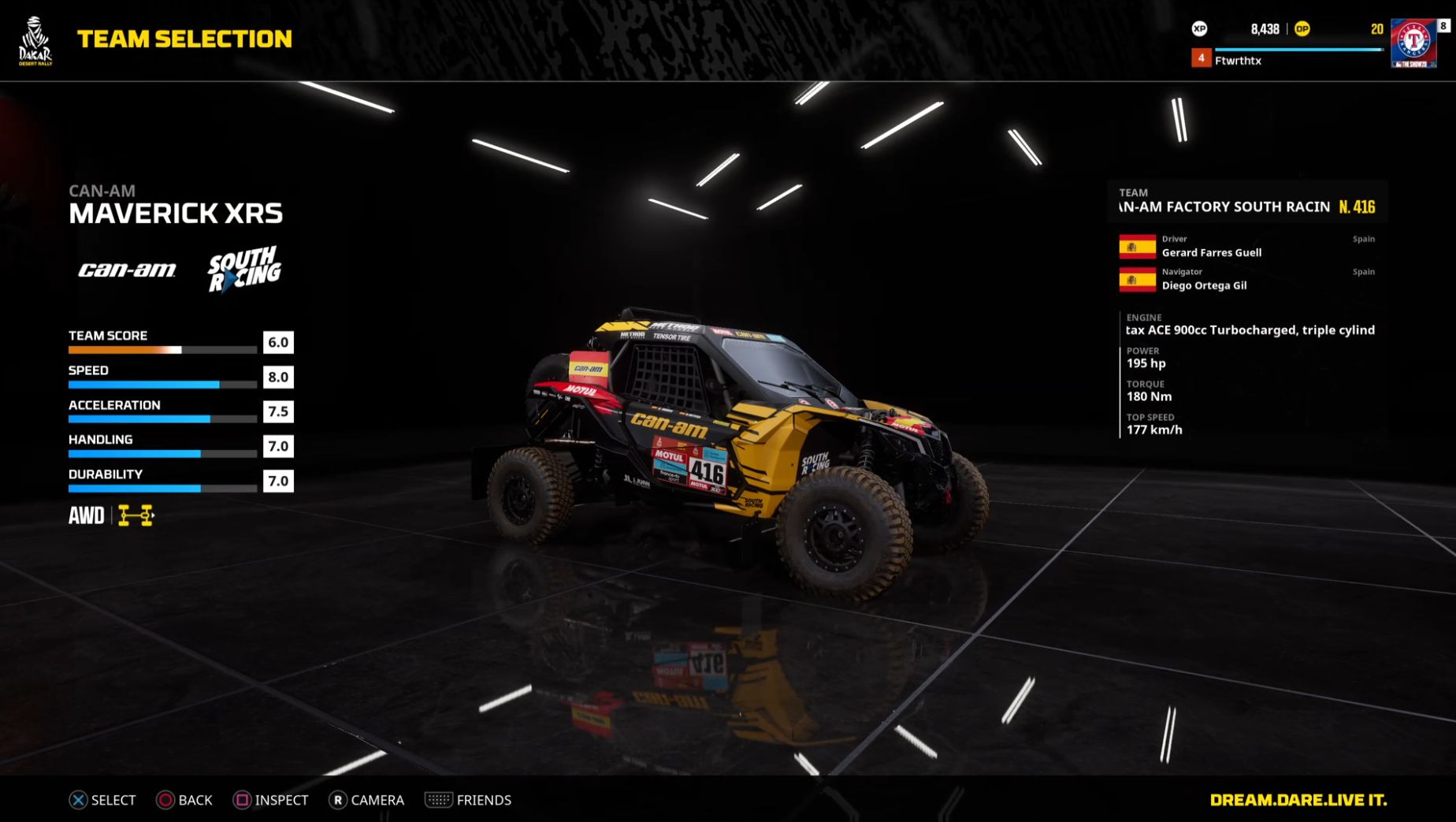