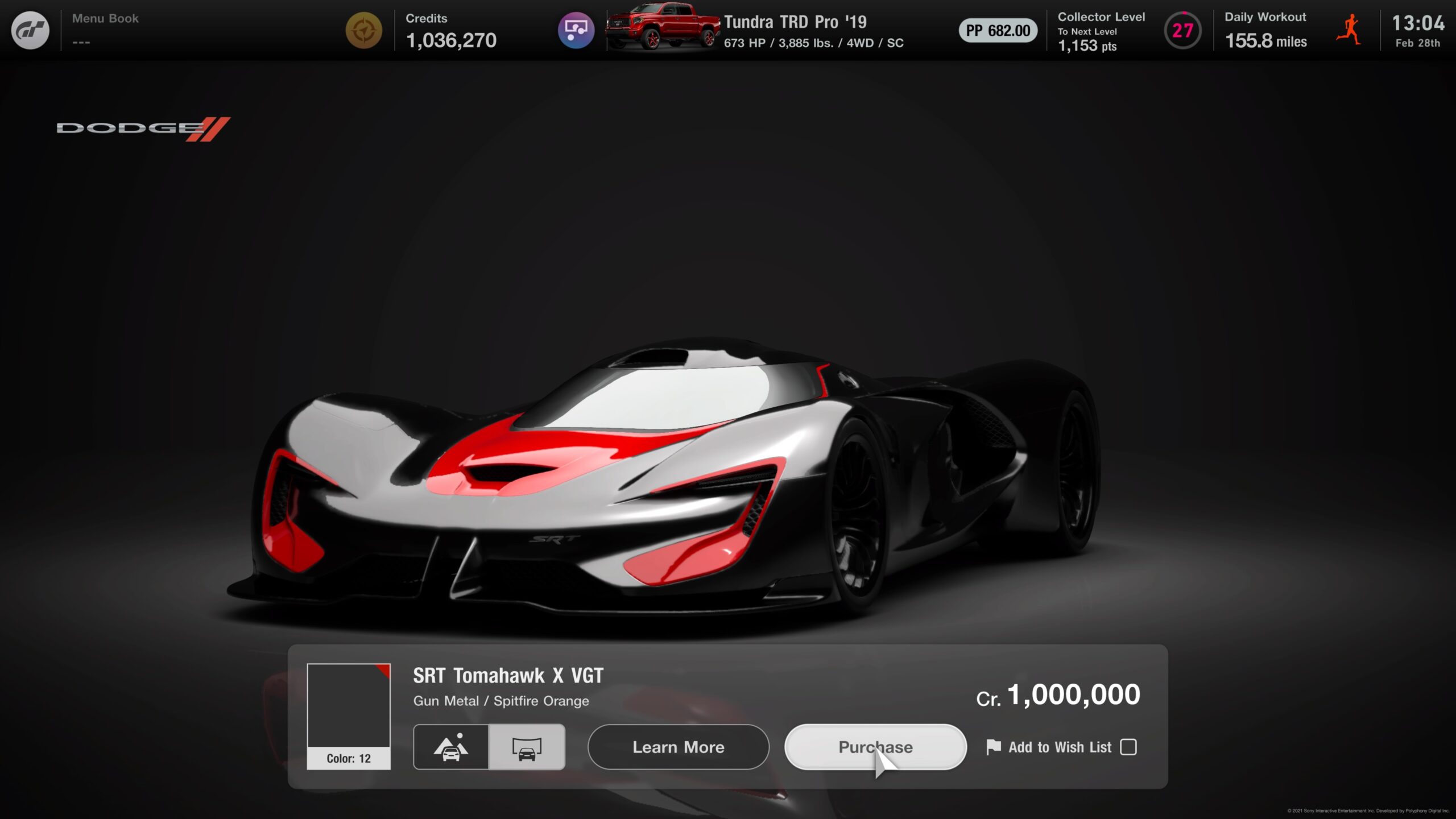 An update for Gran Turismo 7 has been released. The following is a list of the main features introduced.

1. Race Display
– Added wind direction and wind speed indicators. An arrow (wind direction) and number (wind speed) will be displayed on the upper right of the screen under the Track Map.

Other Improvements and Adjustments

2. World Circuits
– Fixed an issue wherein the actual time of day in a ‘Custom Race’ of some tracks would not match the selection made in [Time / Weather Settings] > [Timeframe];
– Fixed an issue with the Sector 2’s Bronze target time in the ‘Circuit Experience’ of the ‘Willow Springs Raceway: Streets of Willow Springs’ track that made the Bronze prize unachievable;
– Fixed an issue wherein it was possible to choose cars without dirt tyres installed from the [Settings] > [Change Car] of the Quick Menu during a ‘Time Trial’ and ‘Drift Trial’ on Dirt tracks;
– Fixed an issue with the weather for all race events;
– The Overtake function for the Dallara SF19 Super Formula / Honda ’19 has been disabled in the Licence test ‘S-7’ (One Lap Time Attack) within the ‘Licence’ pavilion. (The ranking boards have been reset.)

3. GT Auto
– Fixed an issue wherein the racing suit would not be displayed in ‘Driving Gear’ under certain conditions;
– Deleted the ‘Duplicate on Opposite Side’ and ‘Duplicate Symmetrically’ menu items from the ‘Layer Controls’ of the left and right arms while editing Racing Suit Livery;
– Fixed an issue wherein work results would not be applied in ‘Car Maintenance & Service’ if the work is selected by moving the cursor with the Left stick.

6. Brand Central
– Fixed an issue wherein an Invitation icon would appear in the ‘Showroom’ of manufacturers even when the player did not have an invitation.

7. Replay
– Fixed an issue wherein the Replays and Demo Replays would not play all the way until the end.

9. Options
– Changed the ‘Flash and Toggle High/Low Beams’ function assigned to the default button of the DUALSHOCK®4 and DualSense™ wireless controllers to ‘Flash High Beams’. If the button had been remapped previously, selecting the ‘Restore Default Settings’ will apply the change;
– Fixed an issue wherein the BGM would not play during Music Replay if the [Sound Volume] > [Menu BGM] volume level was set to 0;
– Fixed an issue wherein the changes to the exposure value in the ‘Exposure and Saturation’ settings made when starting the game for the first time would not be reflected in the preview screen.

10. Steering Controller
– Fixed an issue wherein the Thrustmaster TH8A shifter would not operate properly when connected to the USB. Please note that the PlayStation®5 console is not compatible with this USB connection. The shifter can be used by connecting it directly to the steering wheel base using a ‘DIN-to-DIN’ cable.

11. Others
– Fixed an issue wherein clearing all licence tests on wet surfaces would not award the Bronze trophy ‘Rain Royalty.’ Players who have already cleared the relevant tests can acquire the trophy by clearing the tests again;
– The Race Demo displayed during Auto Demos has been changed to a Music Replay;
– Various other issues have been addressed.

Thank you for your continued support and please continue to enjoy Gran Turismo 7!