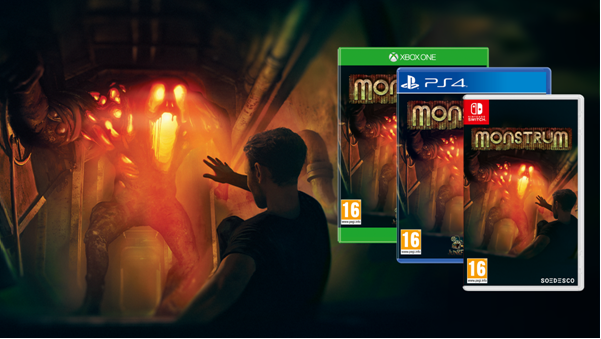 The physical edition of Monstrum on console releases next month

SOEDESCO® announced that the physical edition of Monstrum on Nintendo Switch™, PlayStation®4 and Xbox One releases on October 23, 2020. The game, which saw its digital release on console on May 22 of this year, is a great fit for fans of the survival horror genre that love thrilling hide and seek gameplay.

Set aboard an abandoned vessel, your chilling surroundings will keep you on edge as you try to avoid the terrifying monstrosities that hunt you down. Cracked floors, misty hallways and rooms that look frighteningly abandoned; the old ship is everything but pleasant to be on. Players must scavenge the ship for clues and tools to plan their escape route. However, procedurally generated levels shake things up. Rooms relocate, items switch, and you never know which of the 3 random monsters you’re up against, making it a nightmarish challenge for you to find the necessities you need in order to escape from the ship.

Stranded on an abandoned cargo ship, you find yourself hunted by one of Monstrum’s terrifying predators; each with their own strategy, abilities, and weaknesses. You’ll have to use your wits to outsmart your pursuer within the ship’s procedurally generated environment as you search for an escape. Death is permanent; get killed and you’ll be starting all over again. Can you survive Monstrum?

●     Survive a changing environment and monster with each new game
●     Use whatever you can find to outwit the monsters and escape the ship
●     Hide, distract, and run, but be careful not to fall into the numerous traps
●     Death is permanent.  Try to stay alive or you’ll have to start all over again

SOEDESCO® is a worldwide publisher of both digital and physical games on multiple platforms. The company was founded in 2002, with its headquarters in Rotterdam, The Netherlands. Their portfolio includes titles such as Monstrum, Owlboy, Among the Sleep, Remothered: Tormented Fathers and Teslagrad. SOEDESCO also publishes their own IPs including Truck Driver®, Adam’s Venture®, and Real Farm.

Junkfish Limited is a games development studio based in Dundee, Scotland which focuses on PC development. Founded by a group of graduates from the University of Abertay Dundee, the studio released “Monstrum”, a procedurally generated horror game. In addition to their experience in PC games development, Junkfish also has experience in developing for Mobile, VR and AR platforms. For more information please visit www.teamjunkfish.com or follow Team Junkfish on social media @TeamJunkfish.