As millions of children around the world struggle with attention and focus challenges, BrainLeap Technologies is proud to announce the launch of The Attention Arcade, a cutting-edge gaming platform that allows kids to interact with a series of specially-created PC games that track eye movements to control the on-screen action, while helping to improve and strengthen focus and attention skills.

The research for the games was funded by the National Institutes of Health and BrainLeap’s games were initially created and tested at the University of California, San Diego. The clinical trial included individuals aged 9-25. All participants who completed the at-home training study showed improvements in at least one measure of attention and most showed improvements on multiple measures. On average, there was a 68% improvement in fast and accurate shifts of attention (Etask), a 55% improvement in inhibitory control (anti-saccade), and a 30% improvement in focus (NICHQ).  To learn more about the science behind the games, please visit: https://brainleaptech.com/the-science/ 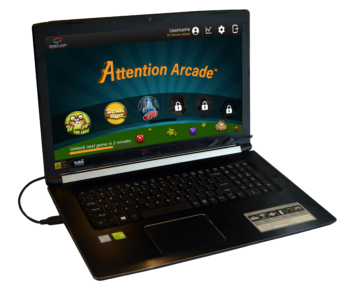 Research has shown that eye movement and attention are tightly linked and share much of the same brain circuitry. To put it simply, where we look and where we are planning to look are where we are placing our attention. The games in The Attention Arcade leverage this connection with games designed to train different aspects of attention. The player uses his or her eyes to control the games via an eye tracker.  Improvements are closely tied to the amount of time played. If a child is playing daily for 20 minutes or more, users can see results in as little as four weeks, with significant improvements possible after eight weeks.

“BrainLeap’s vision is a world where attention training is the norm for improving attention and focus in kids. We created The Attention Arcade to unlock the potential of the millions of children with attention challenges – every year,” said Jeff Coleman, CEO of BrainLeap.  “By making the ability to improve focus available via games, BrainLeap is bringing this cutting-edge training method to a wide audience. Children are more likely to engage with platforms that are fun and reward their efforts.”

The Attention Arcade can now be purchased directly from BrainLeap at https://brainleaptech.com/home-users/.  The price to download and play the PC games is $39/month. To access the eye-tracker required to play the games, consumers can bundle the eye-tracker and games for $49/month or purchase the tracker directly at https://amzn.to/3aA37bX

The six games included with The Attention Arcade are:

DR. MOLE & MR. HIDE – The goal of Dr. Mole & Mr. Hide is to hit bandit moles as they pop out of the ground and to avoid looking at the professor moles. As the game progresses, the moles appear more quickly and from more locations. The game trains the ability to quickly and accurately orient the player’s gaze and attention to a sudden event, and to monitor a wide range of view. As the game gets harder, inhibitory control is also developed as the player avoids looking at the professor moles.

SHROOMDIGGER – The player searches for spotted-top mushrooms in a mystical landscape. Focusing gaze on a “shroom” causes it to shrink until it disappears with a poof. Find all the shrooms before time runs out!  The game trains attention by requiring steady fixation of gaze, visual search in a crowded field, and the ability to ignore moving distractions.

SPACE RACE – The player uses gaze to steer a ship through a cosmic race course, aiming for green gates, avoiding red gates, and collecting stars for bonus points. The game trains anticipatory focus by requiring the player to gaze ahead of the current ship position. Executive functions related to planning are trained by the need to quickly decide whether collecting a star will leave enough time to avoid a red gate that causes damage to the ship.

KUNG FALL – The player trains a ninja for the Dojo’s Aerial Skills exam. Using gaze, the player guides the ninja to land and balance on a series of rock pillars while avoiding birds and ignoring falling cherry blossoms. The game trains planning, steady fixation of attention and gaze, and the ability to ignore moving distractions. This game is unlocked after 3 hours of play.

BUTTERFLY BOB – Butterfly Bob flies through a peaceful landscape, collecting nectar from flowers while avoiding menacing bugs and traps hiding in bushes. The player uses gaze to guide Bob vertically, flying higher or lower as needed. It trains anticipatory focus, planning, and prioritization. This game is unlocked after 6 hours of play.

TRAPPED-A-ZOID – The player uses gaze to steer a spaceship to avoid colliding with neighboring ships. It trains inhibitory control of attention, requiring the player to suppress salient visual input while gazing into the empty space where the spaceship will be safe. Executive function is trained by engaging top-down strategy planning. This game is unlocked after 10 hours of play.