Ubisoft has revealed their launch video for their next gen title The Crew. What did we think about it?

Everyone knows that PC’s have always had a graphical edge over console gamers, and last generation consoles were no different. While the PS3 and Xbox 360 held their own graphically, high end PC’s easily blew them out of the water when it game to ramping up the details od a game. After watching Ubisoft’s launch video of The Crew, it may seem that times are a changing.

At first glance, you might think that the video was actually a live-action feature. It’s not. What you are seeing is what appears to be in-game footage of actual gameplay. Mind blown. Think about that while reading about the game.

The most varied driving experience of all time

Take part in a relentless ride to move up the ranks of the 510s, a gang grown around Detroit’s illegal street racing scene – making a rep for yourself on the underground-racing scene and ultimately taking down their activities all across the United States.

Maneuver through the bustling streets of New York City to lose the cops, cruise down sunny Miami Beach or trek through the breathtaking plateaus of Monument Valley. Each locale comes with its own set of surprises and driving challenges to master. On your journey you will encounter other players on the road – all potentially worthy companions to crew up with, or future rivals to compete against.

Only a few cars have been revealed for the title so far, but customization is looking to be a key feature for it. 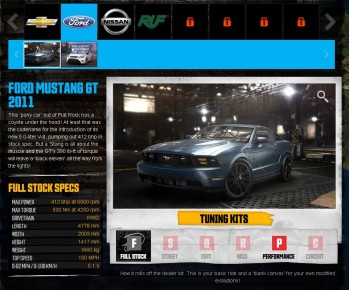 The Crew doesn’t have a release date set in stone yet, but early 2014 isn’t too far off. If the video is any indication of what Ubisoft will be bringing to the next generation, ‘realism’ and ‘lifelike’ has been achieved.

Developer Ivory Tower has done a great job so far and we are hoping they keep up the great work.

p.s. Here’s some more screen shots for your viewing pleasure.