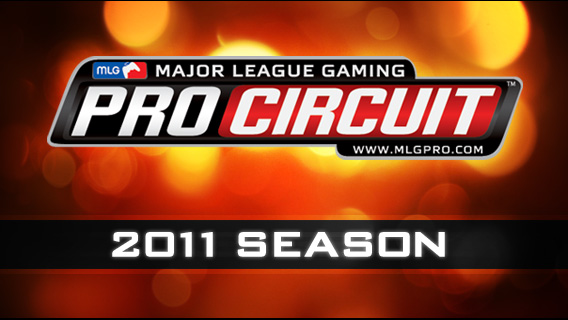 Full details after the jump.

Major League Gaming (MLG), the world’s largest competitive video game league, concluded a record-breaking 2011 season tonight at the Pro Circuit National Championships in Providence, Rhode Island. The best players from around the globe squared off in a three-day, double-elimination video game tournament  from November 18 – 20th competing for championship glory and more than $600,000 in prizes and stipends.  At the end of the intense competition, the following players and teams proved victorious:

Lee Dong Nyung (FXOLeenock), a 16 year old Code S player from Korea, emerged from a field of hundreds of top players from around the globe to capture the 1st Place spot and prize of $50,000 in the StarCraft II tournament. Naniwa from Sweden secured 2nd place and DongRaeGu from Korea secured 3rd place.

League of Legends on PC – played on Alienware computers, The Official Gaming Desktop of MLG

Team SoloMid comprised of players ReginaId, TheOddOne, TheRainMan, Xpecial, and Chaox secured  the 1st Place prize of $15,000 and the title of League of Legends champions.

The Championship tournament closed out MLG’s 8th and most successful Pro Circuit season to date with the largest prize purse – more than $1million awarded over the year – the most epic crowds, and millions tuning in from around the globe to watch the competition LIVE on www.majorleaguegaming.com making it the most watched season in MLG history.

Additional information about the Providence Pro Circuit, 2011 Pro Circuit season and upcoming 2012 Pro Circuit Season will be released in the coming weeks and video is accessible at MLG.tv.

Founded in 2002, Major League Gaming (MLG) (www.majorleaguegaming.com) is the dominant media property exclusively targeting tens of millions of consumers worldwide who have a passion for playing video games as a competitive social activity. The company gives aspiring gamers around the world an opportunity to compete, improve their skills, and socialize through a thriving competitive community with more than 750,000 matches each month online and LIVE in-person Pro Circuit tournaments in cities nationwide. MLG broadcasts all Pro Circuit play via LIVE streaming online to hundreds of thousands of fans from more than 170 countries.  MLG also provides extensive online editorial and video contentto more than 8 million unique fans each month, including LIVE and on-demand original programming related to games, technology and more at MLG.tv and MLG Live.

Best known for blockbuster hits including World of Warcraft® and the Warcraft®, StarCraft®, and Diablo® franchises, Blizzard Entertainment, Inc. (www.blizzard.com), a division of Activision Blizzard (NASDAQ: ATVI), is a premier developer and publisher of entertainment software renowned for creating some of the industry’s most critically acclaimed games. Blizzard Entertainment’s track record includes thirteen #1-selling games and multiple Game of the Year awards. The company’s online-gaming service, Battle.net®, is one of the largest in the world, with millions of active players.