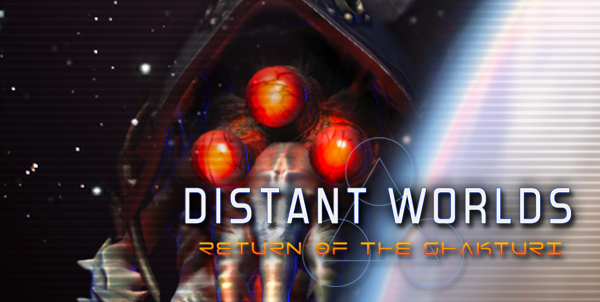 Impressive AI improvements, loads of fixes, and plenty more improvements coming in this update. More details after the jump.

Matrix Games (www.matrixgames.com) and Code Force (www.codeforce.co.nz) are thrilled to announce the release of a major new update for Distant Worlds – Return of the Shakturi. The comprehensive 1.5.0.8 update has a notable concentration on AI improvements that cover a wide variety of fields such as how the AI handles fleets, invasions, colonization and research.  The update also includes a long list of bug fixes and other changes effecting colony balance, diplomacy, and the Ancient Guardians.

It is highly recommended that all Distant Worlds – Return of the Shakturi owners install this update to take advantage of the significant improvements.

David Heath, Director of Operations at Matrix Games, said “Distant Worlds – Return of the Shakturi has enjoyed a strong and very active community and these fans were instrumental in the creation of such a significant and valuable update for this acclaimed expansion. We’re very pleased to have such enthusiastic community support for this unique and remarkable game, so keep those suggestions coming!”

An ancient evil is returning to the vast universe of Distant Worlds! The Return of the Shakturi is the highly anticipated expansion to the critically acclaimed 4X space strategy game Distant Worlds. In addition to a long list of new features and improvements, Return of the Shakturi includes two new and unique alien races complete with riveting events that expand upon the original Distant Worlds and move the timeline of the universe forward into its next chapter with exciting new endgame options. A completely new and vastly expanded research system with comprehensive new tech trees awaits, with new tech and options for avid ship designers such as fighters, bombers, missiles, Ion weapons, planetary facilities, regional capitols, and much more!

Return of the Shakturi also comes packed with interface improvements like an Empire Navigation Tool to provide quick access to everything in your empire, Action Buttons for one-click access to common tasks, an Enemy Targets list showing all known enemy threats, Build Orders to mass-produce groups of new ships in one simple step, and much more! All this coupled with new Empire Policies to fine tune the auto-management of your empire, new galaxy shapes, and extended modding support make Return of the Shakturi an essential add-on to the vast, living galaxy of Distant Worlds!