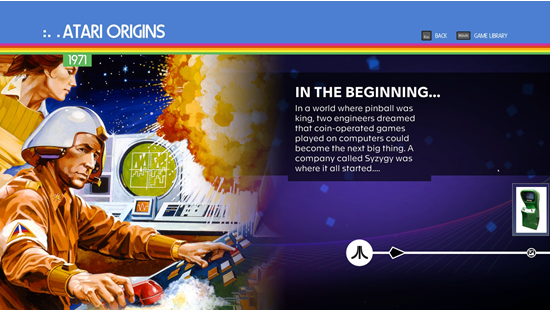 On November 11, 2022, Atari’s 50th anniversary reaches the zenith of its celebrations with the launch of Atari 50: The Anniversary Celebration, an interactive compilation-meets-anthology of the publisher’s most iconic games, brands, and the creative individuals who launched the video game industry. In the collection, the history of Atari is told through a mix of playable games both old and new, short films, never-before-seen interviews, early development logs, and more.

Atari 50: The Anniversary Celebration is unlike any other video game collection, acting as a dynamic trek through the company’s history. Emulating seven separate Atari hardware platforms in one package, the title stands as a remarkable achievement accomplished by the Digital Eclipse team. The titles in the collection span five decades, including a library of over 100 video games, sorted by era in an intuitive linear timeline. The compilation includes other files and materials like early development sketches, hardware schematics, internal memos, pictures, films, and other “artifacts,” the majority of which have never been made available to the public.