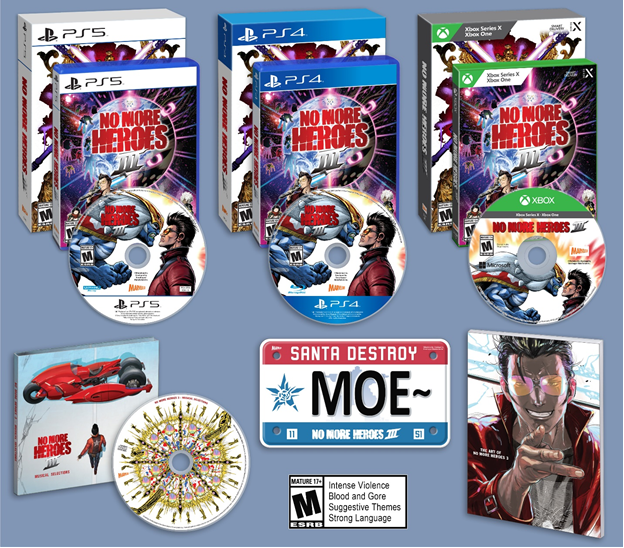 XSEED Games, the independent-minded publishing brand of Marvelous USA, Inc., announced today that No More Heroes 3 will launch in North America for PlayStation®4, PlayStation®5, Xbox One, Xbox Series X|S, and Windows PC via Steam and the Microsoft Windows Store on Oct. 11. The physical ”Day 1 Edition“ is available for pre-order for PlayStation and Xbox consoles through the XSEED Games Store for the MSRP of $59.99, and includes a copy of No More Heroes 3, a 5.3”x7.3” softcover art book with more than 70 pages of gorgeous artwork, a CD featuring 22 full songs from the soundtrack, and a 7”x4” Santa Destroy commemorative biker license plate, with two different, all-new illustrations for both the game case and custom outer box done by series artist Yusuke Kozaki. 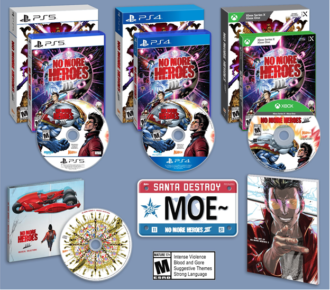 Being the number-one assassin in the world isn’t what it used to be. Otaku hero Travis Touchdown is back once more, forced out of retirement to defend Santa Destroy–and Earth–in an intergalactic test of might while proving he’s more than just a has-been who talks to his cat. Warm up those beam katanas, tighten the all-new Death Glove, and get ready to partake in outrageous boss battles against the evil Prince FU and his nine alien henchmen as Travis fights his way to the top of the Galactic Superhero Rankings! No More Heroes 3 will arrive on new platforms with improved HD visuals and framerates, along with faster loading times to keep players dishing out eye-popping ultraviolence.

Developed by Grasshopper Manufacture and published in North America by XSEED Games, No More Heroes 3 will release on Oct. 11 for the PS4™ system, PS5™, and Windows PC via Steam and the Microsoft Windows Store, and will be supported with Smart Delivery on the Xbox One and Xbox Series X|S. The title has been rated “M for Mature” by the ESRB.

More information about digital editions will be made available at a later date.

XSEED Games is the independent-minded publishing brand of Marvelous USA, Inc., a wholly owned subsidiary of Marvelous Inc., which is a publicly traded company listed in the First Section of the Tokyo Stock Exchange. Formed in 2004 and located in Torrance, California, XSEED Games publishes interactive entertainment content for PC and consoles from the Marvelous portfolio as well as from a wide variety of third-party partners. Whether it’s Marvelous properties such as STORY OF SEASONS (Bokujo Monogatari), SENRAN KAGURA, and Rune Factory, or third-party titles such as the Corpse Party and AKIBA’S TRIP series or Granblue Fantasy: Versus, XSEED Games has grown its reputation among gamers with its critically acclaimed localizations and commitment to fans, remaining ever dedicated to its “indie spirit, player-first” approach.