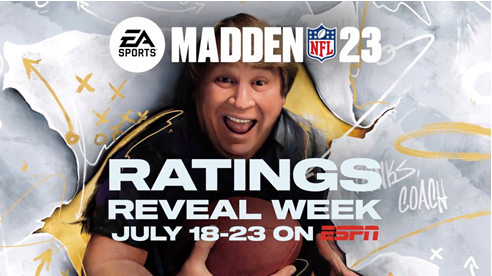 The week features coverage across SportsCenter, Get Up, First Take, and NFL Live. NFL players in the Madden NFL “99 Club” (those rated 99 overall, the highest rating possible in the game) will be revealed during Get Up and the top ten players from several positions will be discussed daily on First Take, SportsCenter and NFL Live. Additional player ratings – rookie ratings, other top 10 position ratings and more – will be revealed across official ESPN and Madden NFL social channels.

“This is a very special year for the Madden community, as EA and ESPN honor the legacy of the late John Madden,” said Andy Tennant, Vice President, Exec Producer of Original Content. “We are always excited to bring an entire week of shows and content to the massive and dedicated community of Madden fans — which continues to grow. The fans want more, and more, on the ratings, on player reactions, and they want expert analysis, and we are committed to giving them what they crave. But this year there is also another layer, another element, and that is all about John Madden.”

“Coach Madden demanded authentic football in the game that carried his name, and the passionate debate and conversation that surrounds Madden Ratings each year from football fans across the country highlights our commitment to accurately reflecting the reality of the NFL,” said Augusto Elias, Senior Director Brand Marketing, EA SPORTS. “To have Madden Ratings Week on ESPN for the third consecutive year is an amazing testament to Madden NFL’s continued influence in sports culture.”

Each year, Madden NFL unveils player ratings for all active players in the NFL, via EA’s partnership with the NFL Players Association. Ratings indicate how a player will perform on the virtual gridiron in Madden NFL based on their performance on the real NFL field.  A team of Madden NFL Ratings Performance Adjustors calculate several ratings across every player – speed, awareness, strength, catching and many more – that come together for a final overall rating. Adjustors continue to analyze player performances and make ratings changes each week of the NFL season.