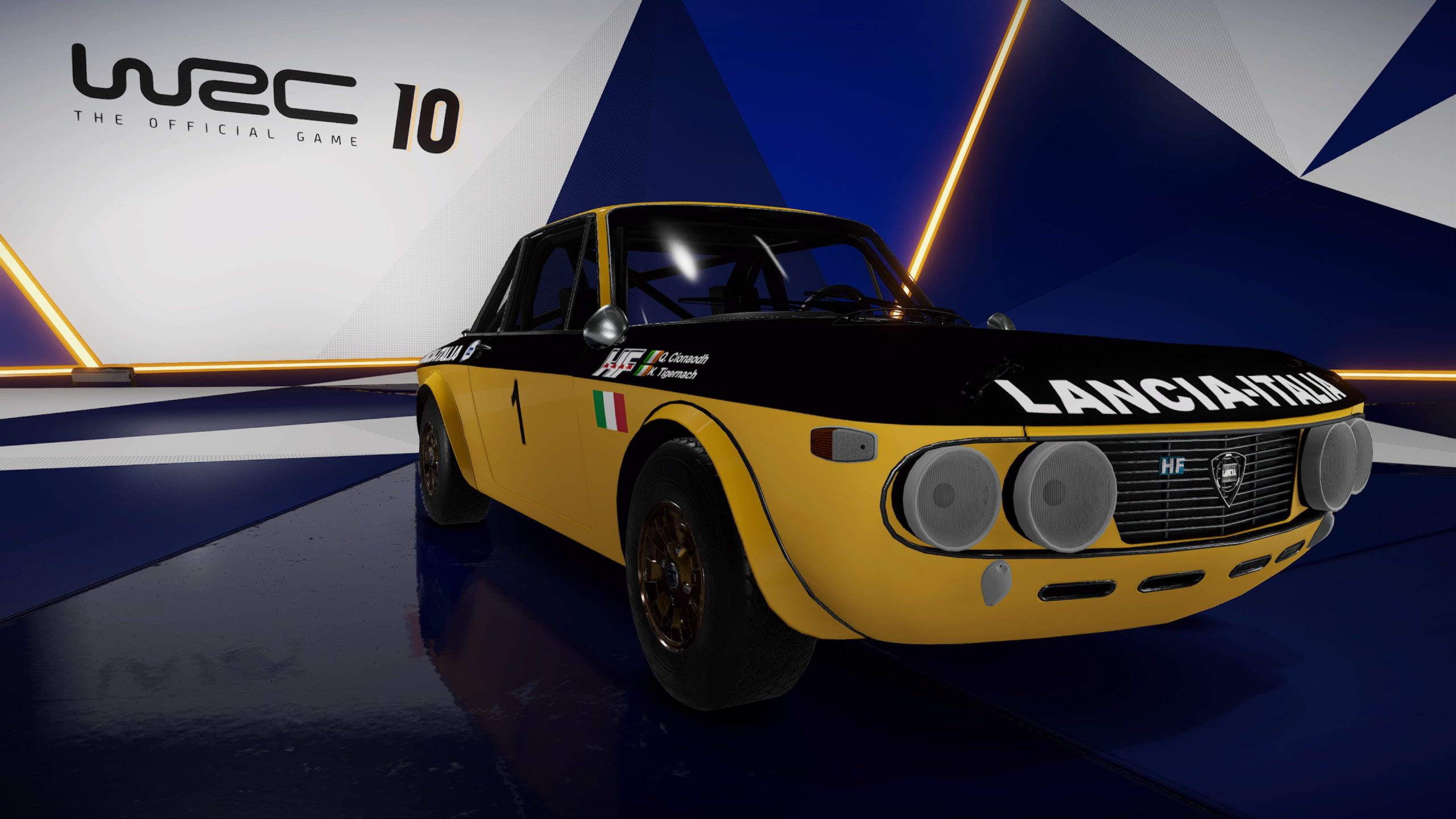 The 49th season of the World Rally Championship is upon us and developer KT Racing just rounded up to fifty to make WRC 10 the 50th Anniversary Edition. Does the game bring enough added content to warrant a new purchase, or does WRC 9 do a good enough job for now?

Developer KT Racing has been putting out WRC games since 2015 and have grown the franchise in leaps and bounds. Almost every year since then they have put out a new release in the series, with changes that ranged from minor, to full on impressive. WRC 7 and WRC 8 brought some major changes to the career mode, introduced some legendary cars, and had some major graphical updates. WRC 9 brought the series into the next generation of gaming with super fast loading times and a level of high graphical definition that made the game smoother then ever. WRC 10 takes all of those improvements, and builds on them with a ton of added content. 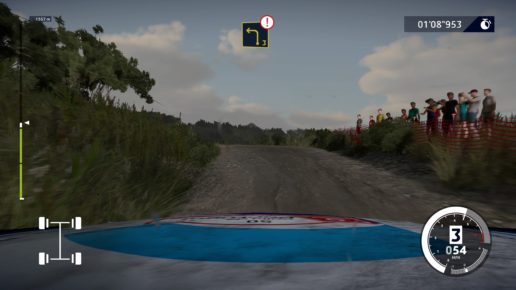 WRC 10 brings with it most of the tracks from the current World Rally Championship circuit, including the Estonian and Croatian rallies, but the Arctic rally has Rally Sweden in its place. More sections will be added post release according to the developer, so there won’t be a lack of content anytime soon. The biggest draw for WRC 10 has to be the historic 50th Anniversary content. These are 17 stages of racing, from seven unique regions around the world. From the 1973 Acropolis Rally in Greece, all the way up to the 2019 Rally Catalunya in Spain, these historic races span the globe and will have you driving on some of the toughest and most unforgiving stages in the history of the WRC. All of these can be played immediately in the quick play menu, with fully adjustable difficulty settings, or you can jump into the 50th Anniversary Mode, where you’ll be tested beyond belief as each stage has the difficulty set for you.

The 50th Anniversary Mode will start you out in Greece in 1973 at the Acropolis Rally driving the A110 Berlinette. The track is 6.96km of gravel and dirt, and surprisingly there are spectators inches away from the track. If you even graze a spectator, you’ll be penalized and forced to respawn, but what kind of person has a death wish that serious? These folks are dressed properly for the time period, but one has to wonder what they’ll be wearing to their funeral, and if they’ll even have an open casket. Flying around a sweeping curve at 90MPH and seeing a group of spectators along the edge of the track where you were hoping to drift can make a driver panic and rethink their current situation.

The toughest part of the Anniversary Mode is that you have to beat the target time in order to move on to the next race. There’s no difficulty adjustments, no traction control or ABS you can toggle off or on, and that does make sense since that technology wasn’t around in ’73, but for folks that aren’t decently skilled at WRC 10, they may never get past the first Rally. Luckily for them they can jump into a quick race and access the content, but the Anniversary Mode seems geared more towards the hardcore sim racing enthusiast and not the more laid back arcade racers who have yet to master rally racing. make no mistake about it, it’s an unforgiving mode that will test you, even if you are a hardcore sim enthusiast.

WRC 10 Review – Career Mode as Great as Before

Jumping into career mode the first thing you’ll notice is the ability to name and choose your co-driver, with gender and nationality options. then you can go right to racing the big boys of the WRC3, or you can opt to spend a season in an even lower league, the Junior WRC. The game recommends spending a season on the Junior circuit, and so do we. This not only acclimates your driving abilities to the cars and courses, it also helps to improve your overall racing team. All of your main training sessions and races on the junior circuit will be completed in a Ford Fiesta Rally4, and that is what all the other racers on the junior circuit use as well, so there’s a pretty level playing field. You can adjust the difficulty as well as lessening the damage your car will acquire, so the junior circuit can take you a long ways from being a rookie, if you let it. 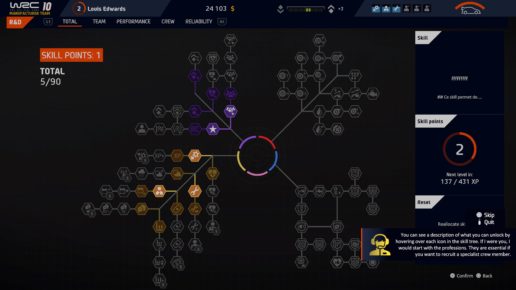 Playing through the junior circuit first also helps you develop some aspects of your Research & Development system before making the jump to the big leagues. The R&D system is pretty deep and gives the game almost an RPG feel to it. You unlock upgrade points upon successfully completing different daily tasks and training sessions, and these points are then used to upgrade different aspects of your team or vehicle. You can unlock meteorologists to better predict the weather, as well as experience boosts, mechanic upgrades, and performance boosts, to name just a few. It’s a pretty deep and robust system that adds a whole new level of realism to the career mode.

WRC 10 has an impressive stable of cars ready to run at your fingertips. From that classic A110 Berlinette all the way up to modern day race cars like the 2021 Hyundai i20 WRC with the Shell Mobis WRT livery. You’ll find modern vehicles by Ford, Toyota, Volkswagen, Porsche, Citroen, and Skoda all represented and ready and waiting for you to drive. The classic stable doesn’t disappoint either with Lancia, Audi, Peugeot, Volkswagen, Ford, and Toyota all getting legendary cars. More cars will be coming via DLC, so even if your favorite vehicle isn’t available yet, don’t lose hope as the developer seems to know what their fan base wants.

WRC 10 is a gorgeous game, and playing on a 4K TV really makes the game shine. The detailed environments give the game a feel of realism, with a track that feels just like it looks. If you see a rut in the road, your car will hit it and act accordingly. The force feed back on our Thrustmaster T150 steering wheel told us that what we saw with our eyes was really there. You could see and feel the puddles, the snow, the rocks, the gravel.

The audio for the game is just as impressive as the graphics. KT Racing took the game to a whole new level of immersion by recording audio based on driver actions, and then duplicating that audio in-game based on what the driver was doing.

WRC 10 takes a lot of stuff from previous titles that were already top notch, and then adds a ton of new content that you won’t find anywhere else. Developer KT Racing proves once again that their WRC titles are unsurpassed in quality of content, quality of audio and graphics, and quality of gameplay.

WRC 10 belongs in your library.