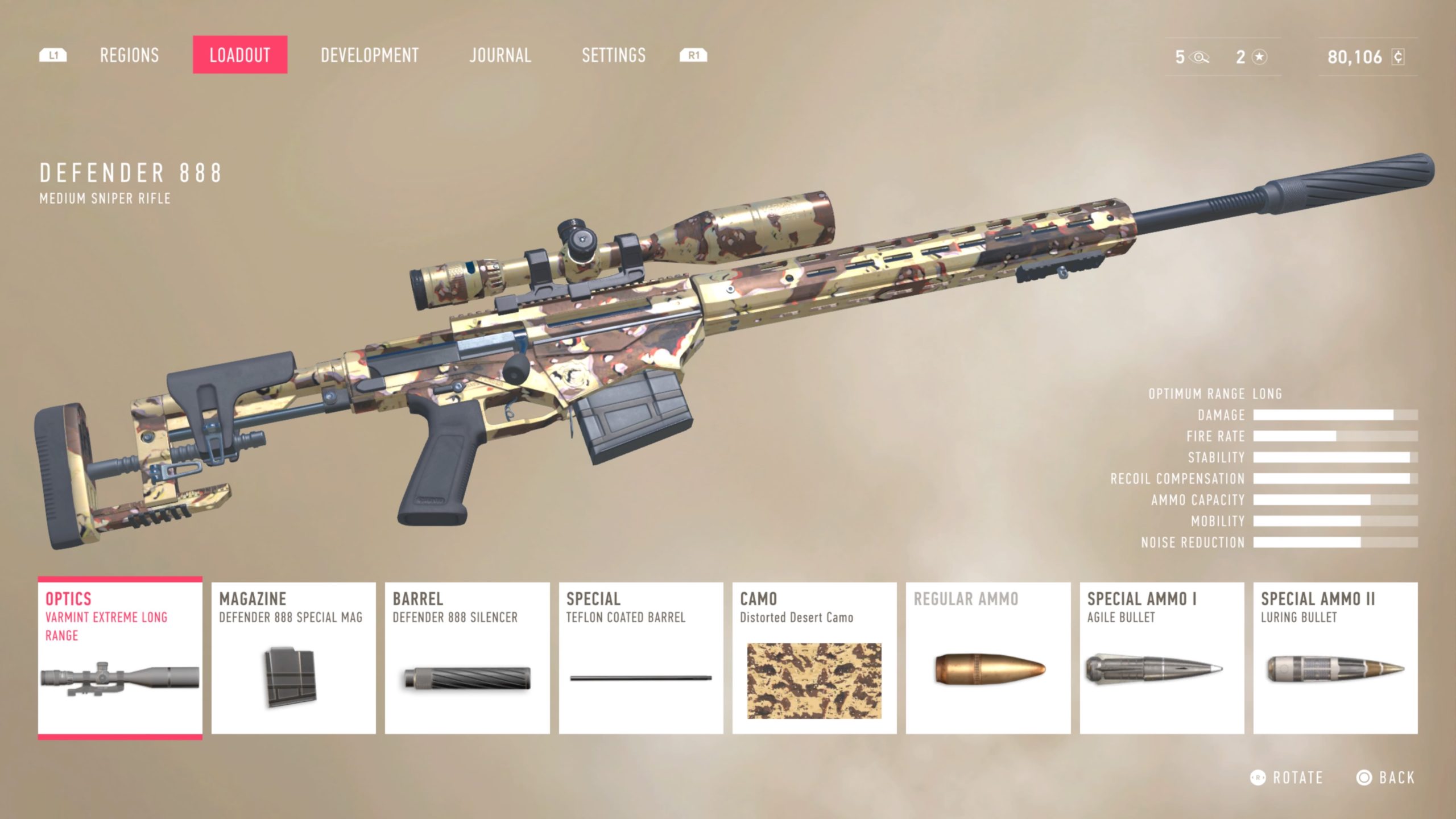 Developer CI Games is ready for you to drop in on your next sniper contract and start taking out bad guys. Should you embark on this adventure, or does the game miss the mark?

CI games has been making Sniper games since 2008 and the series has come a long ways from its first release Sniper: Art of Victory. The 2019 release of Sniper: Ghost Warrior Contracts saw them take the game from one huge open world in Sniper: Ghost Warrior 3, and broke it down into regions and sub missions, which in turn created a much faster loading game. Sniper Ghost Warrior Contracts 2 continues with the same menu system and enjoys the much better loading times. 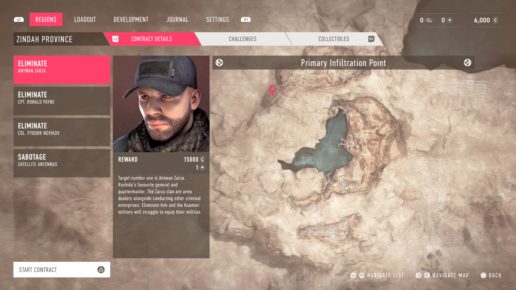 Sniper Ghost Warrior Contracts 2 is a modern warfare shooter set in the Middle East. Play as Raven, Contract Sniper Assassin, as you take out a series of targets across a dramatic single-player campaign, that will have you toppling a violent regime. The story has you taking out the supporting cast of a vicious Middle Eastern president, targeting her money, her forces, and eventually, going after her.

The story is decently written, with collectibles to be found in each region that can add to the story’s depth. We aren’t sure that a female could ever legitimately win an election in the Middle East, but with enough money and bloodshed, anything is possible. The campaign will have you sneaking around, consistently having to take shots at over 1,000 meters, so the game can try your patience, but seeing a skull cap flying off someone’s head via the bullet cam at over 1,500m is disturbingly therapeutic. 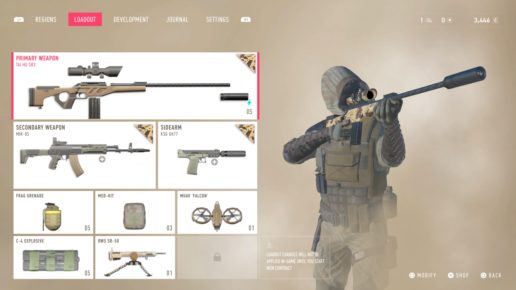 The game centers around one huge region that is broken up into six sub regions, each with their own set of contracts to be completed. You can just take out the bad guy with a single shot to complete the contract, but there’s more fun to be had if you also try to complete challenges along the way. These challenges will reward you with extra cash as well as upgrade tokens for your gear. If you are looking to maximize your arsenal, these challenges are the key. 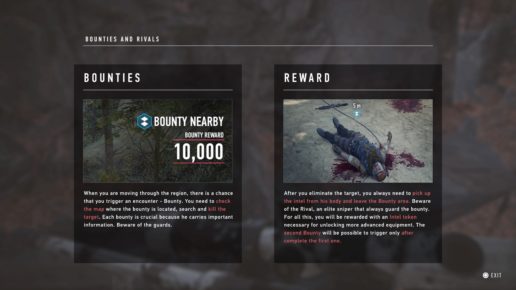 During a mission, targets of opportunity may pop up in the form of bounties. These guys are usually well guarded and may require some planning to take them out. Just blowing their head off isn’t good enough, though as you’ll have to grab some intel off of their corpse and then leave the bounty area to complete it. Watch out for a rival bounty hunter sniper that is always lurking nearby, as he is worth an upgrade token as well and needs to be eliminated. 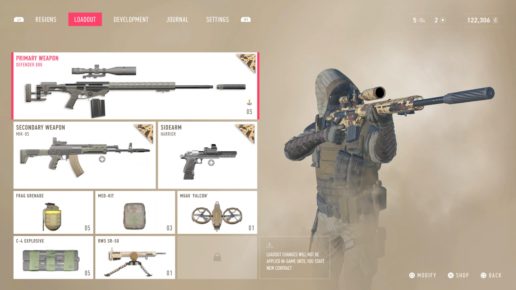 Each contract tells you in advance the type of mission it will be. We found that if you use a decent mid range sniper rifle that allows for a silencer, versus the long reaching and super loud .50 caliber beast, you can still take out the heavier bad guys with some armor piercing rounds, and take out the softer targets, even out at 1,500+ meters, with standard rounds. Knowing your mission in advance can give you a leg up on completing some of the harder challenges.

The game gives you multiple types of ammunition to choose from in your load out, and these can even be swapped out after you complete a contract in the middle of a mission, anytime to upload your recent results. Weapons can be purchased and upgraded with larger magazines from the load out screen, which will allow for multiple types of ammo to be carried during any given contract. It’s a very helpful system that is designed to aid you in your efforts.

Sniper rifles come in one of several sizes: Light (7.62mm, 9 X 39mm, 5.8 X 42mm, & .308 WIN), medium (.338 & .308 WIN), and Heavy (.50 BMG). Light rifles allow you to purchase a hybrid sight which can be switched from a scope to a holographic sight for when the bad guys get too close and you need to pop one in a hurry and also have the ability to be silenced. Medium sniper rifles allow you to add a silencer and swap out the standard barrel for a Teflon coated one, adding to the stability and accuracy of the rifle. The heavy rifle, while a beast of a killing weapon, can’t be silenced, but can have a bi-pod attached to it.

If you are going with the .50 BMG, your secondary weapons become your key to survival as once you unleash the beast, everyone will know where you are and bad guys will come running. Your choices for Secondary weapons consist of a bow, sub machine guns, shot guns, or an assault rifle. We opted for the NR-37 assault rifle with extended and fast loading mag, equipped with a silencer. There are also several different side arms to choose from, which all can be silenced except for the sawed off shotgun. The developer did a great job with the arsenal, and for those that want to drop some extra cash on the game, there are several DLC packs available for purchase to add even more weapons and skins to your experience. We will say that those aren’t needed to complete all of the contracts and challenges, but the options are there. 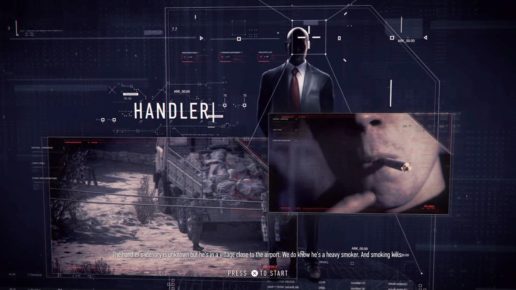