Call of Duty: Modern Warfare 2 has been remastered for the current generation of consoles and is out in the wild. Does the game play nice with the newer technology, or should it have been left behind?

Call of Duty: Modern Warfare 2 was originally released back in 2009 for the PS3, PC, and XBOX 360, to critical acclaim and massive sales both in North America and the UK, with 4.7 million copies sold in the first 24 hours alone. Developer Infinity Ward took a great series and created an overall experience that utilized the current hardware effectively. The graphics were top notch while the game play and weaponry fit well with the series and modern warfare in general.

Controversial Chapter in the Story

The storyline behind Call of Duty: Modern Warfare 2 follows Task Force 141, a special forces unit fronted by Captain Soap MacTavish, as they hunt Vladimir Makarov, leader of the Russian Ultranationalist party, and the United States Army Rangers, who are defending the country from a Russian invasion. The war was started after Makarov ruthlessly murdered hundreds of innocent civilians at an airport in Moscow and left behind the body of an undercover American who the attack was blamed on.

Controversy outside of the game was started after people realized you could play as an undercover American during the mass shooting in Moscow. The Russian government demanded the removal of the level and both the original release and the remaster does not include that chapter in the Russian version of the game. For other regions, you can choose to skip the chapter or play it. There are no achievements, trophies, or intel connected with that sequence, so skipping it has no real effect on the game. You can play the chapter and not kill any civilians at all with no repercussions, or you can go all out and kill as many as you wish. It has no bearing on the outcome of the game.

Call of Duty: Modern Warfare 2 was originally released over 10 years ago, but you can’t tell by playing it on a PS4 Pro. The game honestly looks and plays as if it was a brand new release. The graphics for the PS3 weren’t bad at the time, but now they have been polished even more and honestly look like they were made for this generation. The level of detail has always been a strong point for developer Infinity Ward, so it comes as no surprise that this remaster has been taken to a whole new level. 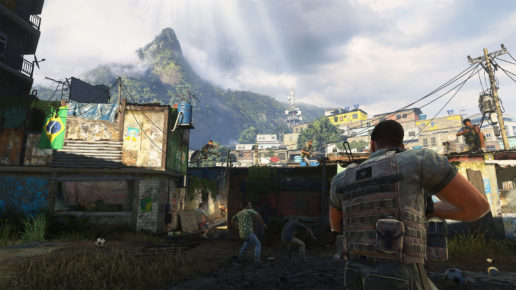 Once you’ve completed the campaign, you can visit the Infinity Ward museum where character models and weapons can be looked at and played with. Be careful when pushing buttons, though, because you might piss some folks off and cause them to start shooting at you. Each chapter of the campaign has intel collectibles lying around, and finding a bunch of these also has endgame effects. You can unlock things like pineapple heads and and bombshell effects that are game modifiers that can be enabled for future play throughs. these are pretty fun to mess around with and just might make a Veteran difficulty run a little more manageable.

Call of Duty: Modern Warfare 2 Campaign Remastered is currently only available for PlayStation 4 owners until April 30th, at which time it will also be released for the XBOX One and the PC.