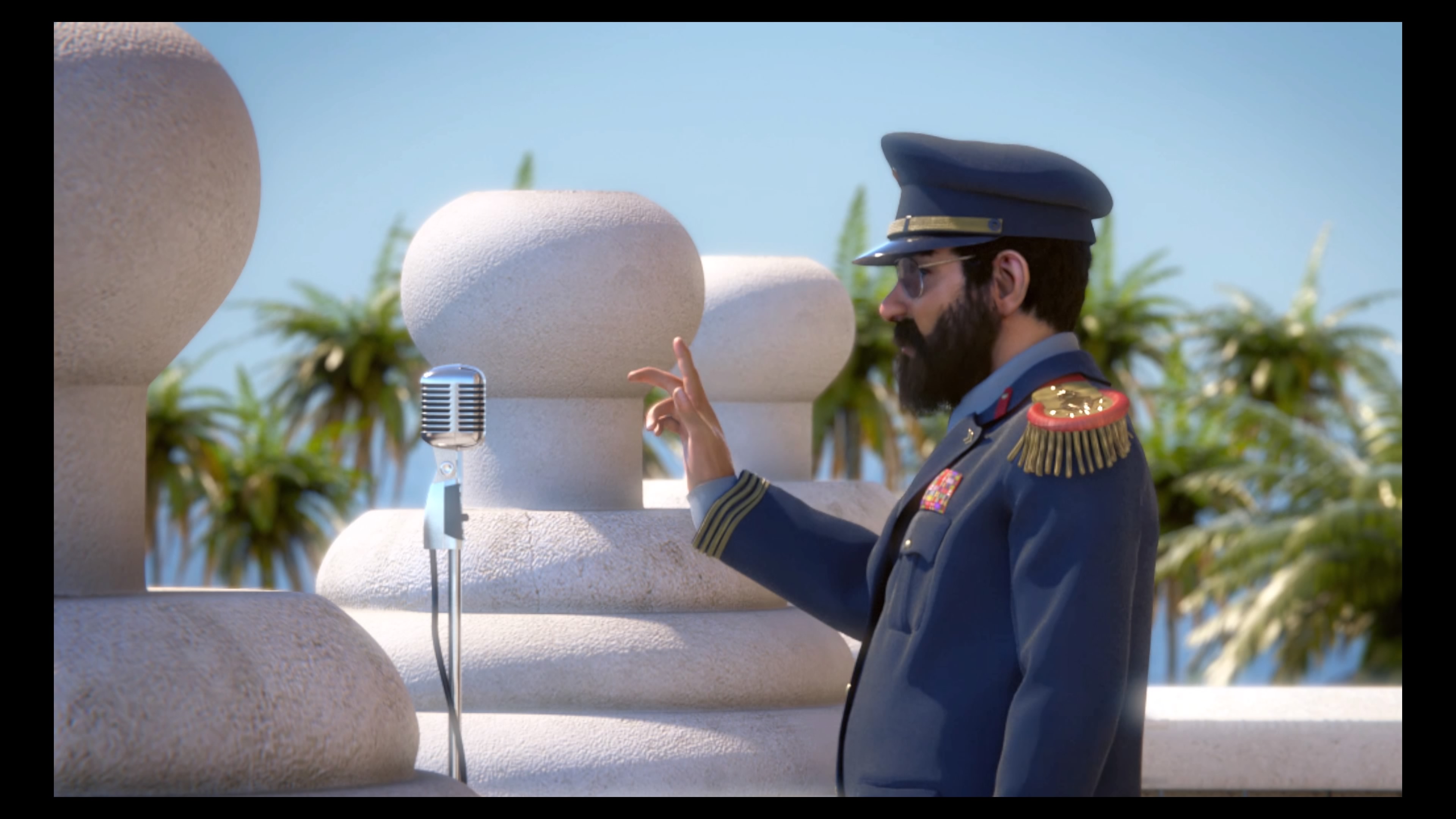 El Presidenté is back and is trying his best to stay in power. We have spent the last week in the Caribbean world of Tropico 6, trying our best not to get impeached, overthrown, or assassinated. Was the game worthy of our time, or should we have just resigned and ran off into exile?

The Tropico series has been around since 2001 and gameplay has generally had the same goal since day one: Become the President of your own island country and stay in power, by any and all means necessary. The general means of achieving this goal really hasn’t changed much in 18 years, but the tools available to an aspiring dictator have expanded and evolved into what Tropico 6 has in El Presidenté’s toolbox. 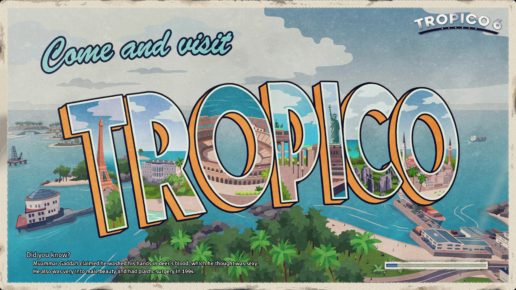 The Stories of Greatness

There are many stories within Tropico 6, and there are 15 missions that tell each one. We strongly suggest new players go through the five chapters of tutorials available before jumping into these story missions, as these tutorials will guide you in all of your future dictatorship endeavors. The amount of tasks and things to do can be overwhelming at times, but if you stay on task, you should be very successful. Each of the stories are told by Penultimo, your ever loyal servant who you will rescue from a deserted island on your very first mission. This guy is the right hand-man every great dictator needs, as he is the ultimate brown noser and butt kisser, and will flatter you with praise every chance he gets. He’s a likable guy that will also take a bullet for you if needed, and you never know when that might be needed, depending on your diplomacy skills.

Each mission is set on a different island chain, each with their own set of goals and unique challenges. Each mission has a main goal which will require you achieve certain tasks, declare independence, and move through different eras. The eras are Colonial, World Wars, Cold War, and Modern Times, and when passing into new eras, new items and gameplay mechanics become available to you. The stories are entertaining, and depending on what difficulty you select to play on, they can be pretty challenging to complete. As you complete missions, new missions become available to play which encompass different island chains or archipelagos, some a little scarier than others. Island design is pretty cool and if you spend enough time looking around, you may just stumble across some interesting finds. 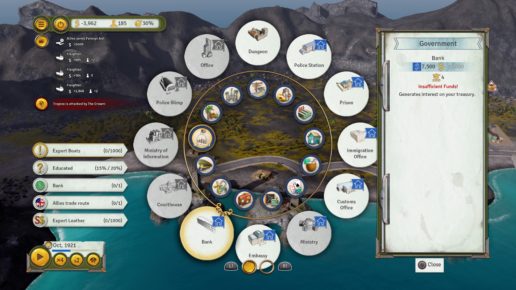 Most missions start out with nothing more than your mansion and limited buildings in the immediate area. To really make a great country, the game requires some decent planning. Roads must be built to connect places like sugar plantations and rum distilleries, and you’ll need trucks to move that sugar so you’ll have to build a teamsters port or building in order to provide transport. Same goes for ranches and tanneries, and a whole slew of other things. The game can really be overwhelming at times and requires a keen eye to detail in order to keep everything running smoothly, and that’s just the productions aspect of things.

Politics is an entirely different animal. You can be extremely rich in resources, but have the hatred of the people against you. How does one become a truly benevolent dictator to appease the rebels, while creating enough wealth to keep the capitalists happy. You can try socialism, but that leads to communism, and that leads to death and destruction. You can try pure capitalism, and that alone can lead to death and destruction. Your best bet is to try and balance them together, but even then that can lead to death and destruction if the scales become too imbalanced. It’s a tricky conundrum that folks have been struggling with since we started out on this rock, so good luck with that. 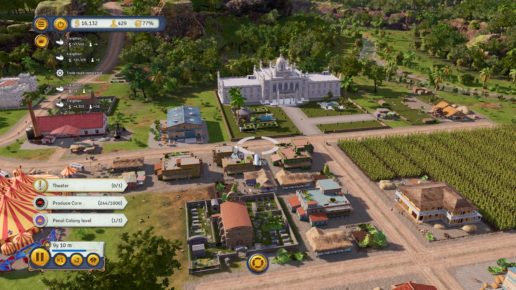 Jump in the Sandbox for Endless Fun

If all you want to do is go build your own great society, sandbox play is available from the get go, which allows you to create a set-up how ever you want to play. You can have unlimited funds or start out almost broke, pick any island or archipelago you want, have pissed off neighbors or have them all singing kumbaya. The choices are up to you and there are a bunch of things to choose from. You can create a scenario and then share it with others, as well, by sharing the unique ID that is generated for it. You can start out in any era you want, so no need to work through oldentimes if you don’t want to. Jump right to the Modern era and gain access to things like a space program complete with a space shuttle, or if you fear the people, an advanced spying apparatus if you are looking to create a scary police state. You will create more rebels that way, but what’s the fun in having everyone happy? 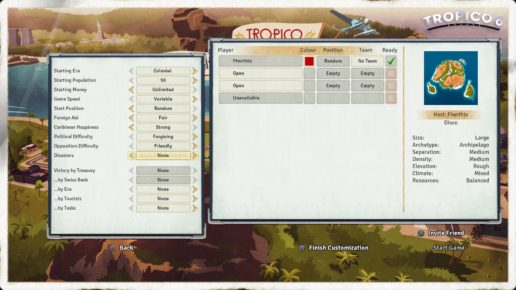 In multiplayer, the set-up is similar to sandbox mode in that you can set things however you wish, with and endgame challenge of your choosing, or just open play as long as you can survive. You can play with up to three other folks with you, either on teams or every gamer for themselves. Every map is available from the start, as is every option you’ll find in the main story mode, so this mode can be just as overwhelming as the rest. The game requires practice and some memorization to be able to use the menu wheel quicker and more efficiently, and if your online opponent is attacking your palace, trying to reinforce your defenses in a rapid fashion becomes paramount to surviving the onslaught.

Your online opponent isn’t your only adversary in the game when playing in multiplayer. If and when you declare independence from the Crown, you’ll have to either bribe their representative or be forced to go to war. We ran into a small issue with that. We had built up a pretty good area on our island but hadn’t built up any guard towers or army bases. We were expecting the local militia to repel any attacks by the Crown. Instead, the Crown soldiers ran unabated through the countryside, destroying ranches, plantations, and anything else we had built. We had plenty of construction companies spread out across the island so rebuilding these destroyed places went pretty quick, but the crown kept attacking. 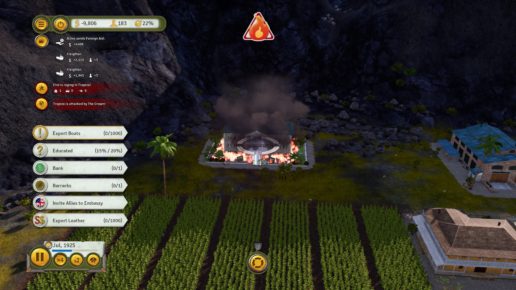 We were stuck in an endless war for 30 minutes that consisted of Crown soldiers destroying places in a bit of a circle, with our builders coming in behind them and repairing them. Our income was at a stalemate, and we had no funds available to build up any defenses at that point. In the end, all we could do is tell our builders to stop fixing stuff as we conceded what we though was a sure defeat. After the Crown soldiers had finally managed to take out about 50% of our holdings, they decided to quit fighting and we survived the war, ready to move on to the next era. It was rather mind boggling the way it played out, as the AI could have totally wiped us out, but instead just gave us a thrashing that required us to quit rebuilding in order for them to reduce us to a certain point. Had we known how that was going to play out, we would have ordered our staff to not rebuild right away and could have saved ourselves 30 minutes of our game time. Not sure if that was a bug or just a flaw in the AI mechanics. 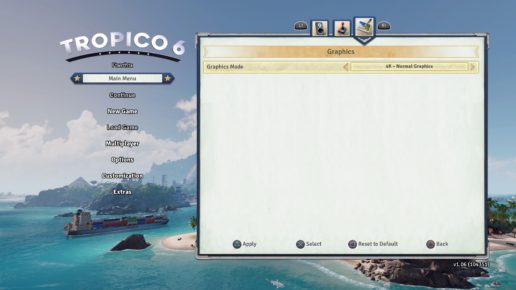 Tropico 6 is a gorgeous game when looking at it from on high and somewhat up close. The buildings had a surprising level of detail we weren’t expecting, all the way down to the statues of El Presidenté. The characters themselves weren’t all that detailed, but they were also really small and you never had to actually do much with them on an in-your-face level. The AI kept them always moving and always busy, even if they might just be goofing off on some leisure activity. The islands range from beautiful sandy beaches, to lush mountainous areas, and even includes some nasty volcanoes that can really ruin your day (and island).

Tropico 6 has taken the real-time strategy genre to a whole new level of micro-managing madness. Not only do you have to worry about running out of food, but you have to make and keep your allies happy, all the while keeping your local inhabitants pacified as well. Politics at this level takes a lot of work, a quick mind, at times a heavy hand, all with a dash of flair and elegance, and sometimes pirates.

Tropico 6 review code provided by publisher and reviewed on a PS4 Pro. For more information on scoring, please read What our review scores really mean.