With the Call of Duty: Modern Warfare game on the horizon, gamers can forget about battling Zombies and now “go dark” (night vision goggles included) for the next blockbuster installment of the Call of Duty franchise.

Going back to its soldier roots with phenomenal graphic improvements, the Call of Duty: Modern Warfare game has been ripped from the headlines showing the intense realities of war in this heat-racing saga. Plus, with every game sold, gamers can give back as GameStop will donate to the Call of Duty Endowment helping unemployed veterans find high-quality jobs.

“GameStop is the best place for all Call of Duty players to express their fandom through our exclusive editions” said Eric Bright – Vice President of Merchandising for GameStop. “We believe in bringing gaming culture to life and our exclusive Call of Duty collection will take players to new heights.”

I wanted to ensure you knew that GameStop is partnering with Activision to release three product line exclusives for Call of Duty: Modern Warfare – the CODE, Precision and Dark Editions, available now for pre-order on GameStop.com and GameStop retail stores. Details include: 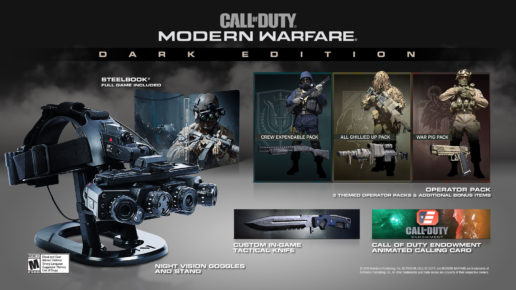 The Dark Edition features functioning Night Vision Goggles that allow the user to see up to 20 meters in absolute darkness. Based off the in-game model, Infinity Ward has outfitted the adjustable goggles with game inspired custom decals and design details. The goggles can operate in “Day mode”, allowing the user to see in full color, and automatically switch to “Night mode” when dark conditions are detected. Night mode features both a black-and-white and a phosphorous blue color setting that the user can toggle between. Don’t be left in the dark, pre-order this limited edition while supplies last.