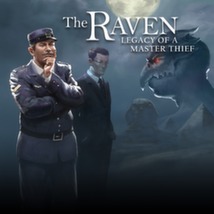 Nordic Games is pleased to announce that The Raven – Legacy of a Master Thief has  launched on the PlayStation®Network in North and South America and is available for $29.99 for all episodes.

All three episodes of The Raven, ‘The Eye of the Sphinx’, ‘Ancestry Of Lies’, and ‘A Murder Of Ravens’ are being released simultaneously today.

Beautifully animated, this adventure is a daring hunt across 1960s Europe where players journey through thrilling atmospheres and stunning environments with the aim of catching the infamous art burglar -The Raven. Players will need to follow the notorious thief’s trademark black feathers in the quest to capture him and finally put his crime spree to an end.

“Yet again, we’ve put everything into the latest console version to deliver the same experience on different peripheral devices,” says Martin Kreuch, Producer at Nordic Games. “With the release on the PlayStation®Network, we finished the third and final chapter in terms of available platforms (1. PC/Mac/Linux, 2. Xbox Live)”

The Raven combines the thrill of the chase ‘whodunit’ with the risk and reward of a heist story where players get to experience both sides of the story as the investigator and the thief. Paying tribute to Agatha Christie’s crime stories and gangster movies from the 60s and 70s, The Raven is set to be a thrilling episodic journey.

All three episodes for The Raven – Legacy of a Master Thief are out today on the PlayStation®Network, and are also available for PC (Windows/MAC/Linux) and Xbox Live for Xbox 360.

About Nordic Games GmbH / The Adventure Company
Nordic Games GmbH is a wholly owned publishing subsidiary of Nordic Games Group AB. Founded in 2011, the Vienna/Austria based company puts great emphasis on its extensive game catalogue. The core portfolio comprises products and brands which have been acquired from JoWooD Entertainment AG, DreamCatcher Interactive Inc., THQ Inc., and Atari SAS, and further IPs and trademarks will follow.

The company will pursue the long-term goal of delivering quality products that live up to expectations of gamers worldwide. For more information, please visit www.nordicgames.at.

About KING Art GmbH
KING Art is an award-winning independent game developer specializing in producing high quality games. They are among the leading experts on story-driven games in Germany and have produced several successful adventure games that received rave reviews by the gaming press. Since 2002 they have also been pioneers in the area of extensive browser games, and have accumulated expert knowledge during the production of more than 30 successfully completed browser game projects.