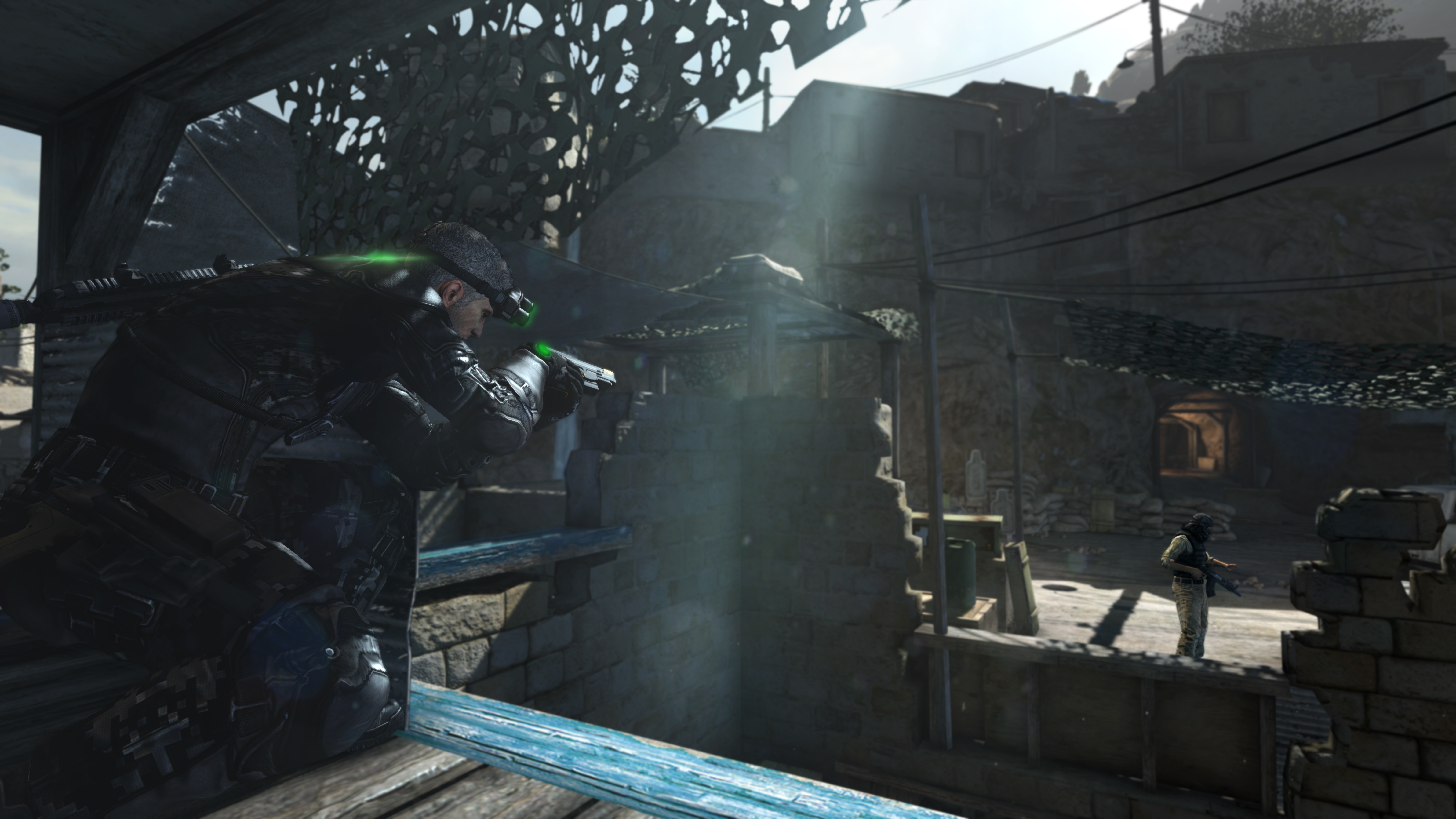 Sam Fisher and his crew have returned to their airborne ops center Paladin and are ready for deployment. Should this game be grounded for good or is it ready to take on the world?

The critically acclaimed Splinter Cell series was born over ten years ago and follows Sam Fisher, a highly-trained agent of a black-ops sub-division within the NSA, dubbed Third Echelon. The series has always been known for its stealth and action styles of gameplay, with an emphasis on tactics and co-operation over assault and spray-and-pray. Well thought out planning, with adjustments on the fly, has always been the standard operating procedure for Sam Fisher and his small group of intelligence gatherers, hackers, and soldiers. Splinter Cell: Blacklist follows this same formula and executes the plan precisely and on point.

Splinter Cell: Blacklist finds our hero Sam no longer a member of the Third Echelon, but as an active part of the newly formed clandestine unit named the Fourth Echelon (4E). This group only answers to the President of the United States, who in turn denies their very existence, which gives her plausible deniability in anything they do. If we can’t trust our government, who can we trust?

As the game opens, we find that a group of terrorists calling themselves The Engineers, and backed by countless countries around the globe, have created a list of attacks that will be carried out if all of the US troops currently deployed around the World aren’t immediately brought home. This list is deemed The Blacklist and each attack is spaced a few days apart. The countdown clock has begun for the first attack and it’s up to 4E to figure out each attack on the list and thwart those attacks. The very livelihood of their friends and family back in the states is at stake and failure is not an option.

Lucky for Sam he doesn’t have to work alone. Anna Grímsdóttir (AKA Grimm) is the technical operations manager at 4E. Her role is to provide Sam Fisher with technical support in the field, as well as to analyze and interpret much of the electronic data. Working alongside her is Charlie Cole. Another hacker who has been on the hacking scene since the age of twelve. Charlie has always used either his mout or his tech skills to stay out of trouble, with little to no consequences for any of his indiscretions.

Sam doesn’t have to head in to the field on his own, as another soldier can have his back. Isaac Briggs is a by-the-book CIA officer and was the first to see the signs of the impending Blacklist. Cool, analytical, and relentless, Briggs pushed his findings but his warnings were disregarded in the weeks leading up to the attack. However, Grimr had been following his career with interest, and when Briggs fell out of favor with the CIA, she quickly had him seconded to 4th Echelon.

Splinter Cell: Blacklist is a story driven game, with a story written well enough that it could have been a stand alone novel. The name Tom Clancy is well represented with not only the plot, but how the story unfolds as well. The writer did an excellent job of tying in real world names, places, and some events, to give the player a real world feel to a fictional story.

While the story does sit front and center from start to finish, the gameplay is where the game truly shines. You have three options to choose from when deciding how to approach each level of the game. You can go silently and mercifully as a Ghost, not killing anyone and bypassing as many tangos as possible, while making the rest take a nap when you need a clear path. You can choose to go silently and deadly as a Panther, leaving dead bodies in your wake, without alerting anyone to your presence. Lastly you can go loud and proud, killing everyone and everything with a bang and a bullet in the Assault style. This is the perfect mode for the Rambo hidden inside everyone.

Awards for each style of play are yours for the taking, as you’ll earn cash for new weapons, gadgets and upgrades for most items. A difficulty multiplier can help you earn more cash, but that extra dough will come at a price. The Rookie difficulty makes for a simple way to map out the tactics needed to complete levels on the hardest Perfectionist Difficulty, but a few random changes in the AI will have you second guessing yourself time and again. The perfectionist Difficulty will test not only your skills as a marksman, but your patience and timing as well. The easier settings can give your specialized goggles a sonar ability to see through walls, but don’t expect that when doing a Perfectionist run.

Gadgets can assist you in whichever style you choose to incorporate. You’ll be able to purchase a trusty crossbow that can stun or put to sleep most of the bad guys. It also has a noisemaker arrow that can draw enemies into the shadows, where you can take them out either deadly or not. This is handy on a Panther run as you can draw a bad guy into the shadows at a distance, then silently take his head off with a well placed, and silenced, sniper shot. Grenade types can be both lethal and non-lethal. Flashbangs are a great way to start an assault on a room, while sleeping gas grenades can take out an entire room at once, without killing a soul. Gandhi would be proud.

The main campaign consists of eleven solo missions that can be revisited at anytime. This is helpful for earning more cash so that you can purchase that sniper rifle you have your eye on. Each level has three collectibles that can earn you some bonus cash. These are the Dead Drop, a High Value Target, and a Blacklist Laptop. As you upgrade your goggles you’ll be able to see these items from farther away, so revisiting levels later becomes a must for those completionists out there. The Dead Drop is the easiest item to collect generally speaking as both the laptop and the HVT can be killed or destroyed. The laptop will be registered as hacked immediately and the system will auto save that for you, but the HVT will require you making it to the next checkpoint before it’s registered as captured.

Autosave, while a useful feature,  turned out to be more of a hindrance than a help for us on several occasions. While playing on the PS3, the game froze several times while autosaving, and caused our game save to be corrupted. Luckily for us we have PlayStation Plus and our game save had been uploaded previously, but we did lose four plus hours of game play thanks to the corruption. In the end, we found ourselves quitting the game after each mission, uploading the latest game save to the cloud, then heading back into the game to continue on. The save did corrupt one more time after that so luckily we were prepared and only lost a few minutes of gameplay in that instance. The latest PS3 patch hasn’t remedied the problem as it has happened post 1.02 patch, but it’s not a complete deal breaker thanks to PS+.

Alongside the campaign missions are the 4E missions. These are given to you by members of your team and can be completed either solo (with the exception of Briggs’ missions) or with a friend. Co-op can be played either split-screen or online with a friend. Split screen is OK as long as you have a decent size TV, but playing online with a friend is a better option. Headsets, while not required, should be used so that you can communicate with your teammate. This is a tactic driven game and tactics require communication in order to be successful.

Spies vs. Mercs is the Multiplayer Mode of Splinter Cell: Blacklist. Competing in teams, you’ll either play as Spies or Mercs to work and complete your objectives – and take down your enemies – across five game modes:

Whether you’re a spy or a merc will determine which set of loadouts you’ll be using, and will also determine how you may wish to achieve your goal. Each game mode supplies you with a unique set of tasks so you’ll need to learn your role and execute properly in order to win and survive. You’ll also be switching between playing as spies and mercs, so don’t get too comfortable in just one role.

Splinter Cell: Blacklist takes a tried and true formula and executes it with pride and precision. Whether you are looking for a straight up, run-n-gun shooter, or a take-your-time and kill-or-not-kill stealth action title, developer Ubisoft Toronto hit the bullseye.