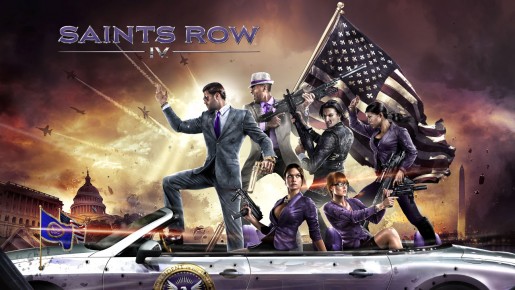 Deep Silver and Volition today released the Inauguration Station for Saints Row IV that will allow players to shape their future Presidents in time before Election Day on August 20.

Download the free Inauguration Station ahead of the release of Saints Row IV and create your very own, unique President now!

Enter the election campaign and promote your President in the community on saintsrow.com – the crazier, the better!

Presidents created in the Inauguration Station can be uploaded via the website and can then be transported to virtual Steelport in Saints Row IV to use as playable characters at the game’s launch.

Tip: You can download your characters from Saints Row: The Third to update them for Saints Row IV.  Head over to www.saintsrow.com to browse an online gallery with thousands of shared community characters.

In Saints Row IV, the head honcho of the Saints has been elected to the Presidency of the United States. But the Saints are just getting started. Now the larger-than-life insanity of the Saints series gets a new twist with a catastrophic alien invasion, and the aliens have transported the Saints to a bizarro-Steelport simulation. Wield gargantuan superpowers and fight to free humanity from alien granddaddy Zinyak’s mental grasp. Escape the simulation that’s trapped the Saints crew, or die trying. Saints Row IV lets players delve into an arsenal of alien weaponry and technology that will turn each Saint into an ultimate entity of destruction. Utilize out-of-this-world superpowers to fight all the way to the top. With intensified action and enhanced customization, players can use their newfound superpowers and leap over buildings, outrun the fastest sports cars, or send enemies flying with telekinesis in the greatest, most insane installment of Saints Row yet.

About Deep Silver
Deep Silver develops and publishes interactive games for all platforms, seeking to deliver top-quality products that provide immersive game experiences driven by the desires of the gaming community.  The company has published more than 200 games worldwide since 2003, including the best-selling zombie action Dead Island™ franchise, the critically-acclaimed Metro™: Last Light and this summer, it will publish the fourth title in the action adventure open world Saints Row series, Saints Row IV™. Deep Silver is a wholly-owned subsidiary of Koch Media, GmbH, and includes the renowned development studio Deep Silver Volition, based in Champaign, IL. For more information, please visit www.deepsilver.com or follow us on twitter at @deepsilver.