Fans of The Venture Bros., the critically-acclaimed and fan-favorite Adult Swim series, can show their virtual love for Team Venture with an all-new line of virtual goods available starting today in the Avatar Store on Xbox Live. This first-of-its-kind offering of digital swag for the series includes a total of 11 assets from which to choose, including Hank and Dean’s iconic tops, Molotov’s eye patch, Sergeant Hatred’s helmet, Dr. Killinger’s mask, Baron Underbheit’s jaw, Triana’s top and sweet costumes for Dr. Girlfriend, The Monarch, Phantom Limb and Speedsuit. The goods range in price from 80-240 Microsoft Points and can be found here. 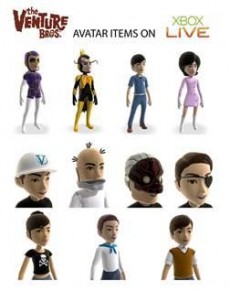 These new virtual goods add to an already strong presence of The Venture Bros. in the Xbox Marketplace, which includes the series’ first four seasons available for purchase, as well as an eight-minute series recap provided by Henchman 21 and a season five sneak peek. To celebrate the start of season five, which debuted on Adult Swim on Sunday, Xbox Live is also offering fans a free, limited-time download of the season premiere episode “What Color Is Your Cleansuit?” through June 9. The highly-anticipated episode picks up moments after the stunning climax of season four and hits the ground running for a season of globe-trotting adventure and stay-at-home suspense. To access all of The Venture Bros. episode goodness, visit here.

Turner Broadcasting System, Inc., a Time Warner company, creates and programs branded news, entertainment, animation and young adult media environments on television and other platforms for consumers around the world.