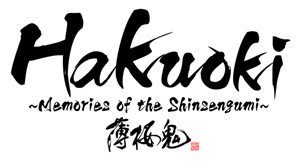 Imagine the hot summer weather beating down on you. The air is stale and there’s no shade. All you want is a fan to cool you down a bit, a nice art book to read, and just maybe a towel to wipe off the sweat. You open your bag to find a “Hakuoki: Memories of the Shinsengumi Limited Edition” with all those items in it! That’s right, “Hakuoki: Memories of the Shinsengumi” will have a very special limited edition that includes an exclusive Japanese folding fan (“sensu”), a Japanese-style towel (“tenugui”), and an exclusive art book showing off those Hakuoki men! Stay tuned for more details!

Japanese Folding Fan – What better way to cool down from the romance in Hakuoki: Memories of the Shinsengumi than with your very own Japanese-style fan with artwork from the series!

Japanese-style Towel – Need a slight pat down to make sure you look your best for the Hakuoki: Memories of the Shinsengumi photo booth? Look no further!

Men of Hakuoki Art Book – Just can’t get enough of the men of Hakuoki? We have an art book for that.  Featuring artwork from the series!

An Epic Tale of Love and Honor – Learn about Chizuru and her many companions, as well as the secrets and political intrigue behind the Shinsengumi and the mystery of her missing father.

Six New Stories – Learn what happens in between major events, and gain a bit of insight into the minds of the characters!  These side tales give new meaning to other events in the story.

See The Men of Hakuoki in 3D – Utilizing Nintendo 3DS™’s 3D functionality, play Hakuoki: Memories of the Shinsengumi in 3D!

Photo / Movie Gallery– As you progress through the game, unlock a myriad of photos and movies from important moments in the story!

Photo Booth Fun! – Get your friends and pose with your favorite characters in a variety of themes and backgrounds inspired by “purikura” – Japanese photo sticker booths! Create some unforgettable pictures!

Hakuoki: Memories of the Shinsengumi has not yet been rated (RP) by the Entertainment Software Ratings Board (ESRB).  For more information visit www.hakuoki.com/memories.

Released in February 2012, Hakuoki: Demon of the Fleeting Blossom drew praise from critics and fans alike as an original and beautifully-written visual novel.  EGMnow.com hailed its story as something “you’ll want to experience until its end, filled with interesting characters, lovely artwork, and a great English translation.”Aksys Games has expanded on this series here in the US with the action-adventure spin-off, Hakuoki: Warriors of the Shinsengumi and now with the visual novel, Hakuoki: Memories of the Shinsengumi. Hakuoki ‘s success in Japan and the US has spawned an anime that is currently being published in the U.S. by Sentai Filmworks.

Located in Tokyo and founded in 1994, Idea Factory has developed and published many well-received RPGS and innovative visual novel games. Some of their more popular titles include, the Record of Agarest War series, Hakuoki: Demon of the Fleeting Blossom and Blazing Souls. Idea Factory is part of the Idea Factory Group, which comprises Idea Factory, Compile Heart and Design Factory.

To learn more about them, see the information on the Idea Factory web site: http://www.ideaf.co.jp.

Founded in 2006 in Torrance, California, Aksys Games Localization, Inc. is a localization studio and visionary video game publisher specializing in the Japanese-to-English translation of games and committed to publishing unique, multicultural, high-quality interactive content for all current-generation platforms with its talented staff. Its lineup of games includes the Record of Agarest War series, Zero Escape: 9 Hours, 9 Persons, 9 Doors (Winning “Best Story/Writing” Awards from IGN and Nintendo Power), Zero Escape: Virtue’s Last Reward, and the acclaimed BlazBlue fighting game series. More information about Aksys Games and its products can be found on the company’s website, www.aksysgames.com.