Time to start your engines: Deep Silver is going to take you on a non-stop Ride to Hell™ this summer

They say there’s no freedom like the open road, and no bigger badasses than bikers. Deep Silver is proud to take gamers deep into a world of bare-knuckle violence, seedy strip clubs, and rip-roaring motorcycles with the Ride to Hell™ universe, revving into homes starting June 2013. 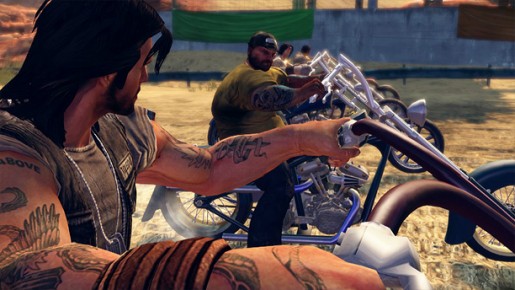 Ride to Hell: Retribution tells the story of a lone rider, Jake Conway, a man with either a gun in his hand or a girl on his lap (and on more than one occasion both!). He’s on a merciless path of revenge against a brutal biker gang called The Devil’s Hand, armed to the teeth with an arsenal of deadly weapons to enact his vengeance on foot and on bike. The only law Jake answers to is his own.  Hit hard, ride fast and leave ’em in the dust on June 25, 2013, in North America and June 28, 2013, in the rest of the world for the Xbox 360® video game and entertainment system from Microsoft, Windows PC, and PlayStation®3 computer entertainment system.

Looking to lead your own pack of fearsome bikers? Ride to Hell: Route 666 is just for you, taking the player on a journey to conquer legendary Route 66. Players will recruit and lead a gang of bikers from Chicago to Los Angeles, fighting for every mile of the road using both brain and brawn. Fast paced arcade combat combined with easy to understand tactics – anyone who understands team sports will be able to dive right in to commanding their gang. Get ready to rule the road with Ride to Hell: Route 666 in June 2013 on the PlayStation®Store, Xbox LIVE® Arcade for Xbox 360 and Steam.

Last, but certainly not least, the Ride to Hell universe will be rounded out with Ride to Hell: Beatdown, a rock’n’roll brawler set to light up the mobile space, on the go! More details on this title will follow soon.

For more information about the Ride to Hell universe, please visit one of the following official sites:

About Deep Silver
Deep Silver develops and publishes interactive games for all platforms, seeking to deliver top-quality products that provide immersive game experiences driven by the desires of the gaming community.  The company has published more than 200 games worldwide since 2003, including the critically-acclaimed, best-selling zombie action game, Dead Island™.  Upcoming titles include the side-scrolling arcade brawler, Sacred™ Citadel, the isometric action RPG, Sacred 3, and the next game in the Dead Island franchise, Dead Island Riptide. Deep Silver, Inc. is a wholly-owned subsidiary of Koch Media, GmbH.  For more information, please visit www.deepsilver.com or follow us on twitter at @deepsilver.

About Eutechnyx
Eutechnyx is the world’s leading independent racing game developer.  The company publishes a number of game brands including NASCAR® The Game (console, PC and mobile) and Auto Club Revolution® (PC free-to-play) . With a history spanning over 25 years, the studio has won numerous awards for its million-plus selling titles and garnered exceptional acclaim in the business sector. As well as its headquarters in the UK, the company has studios in Hong Kong, Chengdu and Charlotte, USA.

About Black Forest Games
Founded in 2012, Black Forest Games is an independent game studio focused on high-quality video games. The studio is based in Offenburg, Germany, and currently employs a team of 40 international industry professionals who specialize in building games for all major game platforms. For more information on Black Forest Games please visit the official website at www.black-forest-games.com