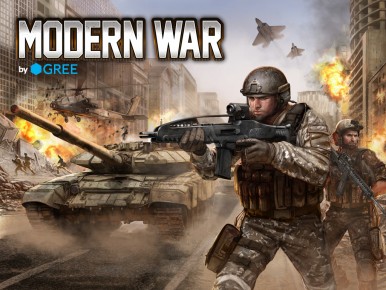 In World Domination, players can unleash their quest for global takeover by gaining control of the world one country at a time. The first country up for grabs: Brazil.

The first highly anticipated three-day World Domination event kicks off on January 18. During the event, teams of players – called factions – are invited to face off against each other for the chance to take over Brazil. Factions will be rewarded World Domination points by declaring war against other factions and successfully attacking rival players and fortifications in those wars. The Factions that collect the most World Domination points will gain control of Brazil. A new World Domination event will be introduced on an ongoing basis. Players can also complete various military actions to ready the troops by donating concrete and cash to the faction, nominating Defense Leaders and completing Pre-War missions for rewards that can be used at war. The top 3 factions with the highest number of points at the end of the entire World Domination event are declared winners and awarded control of the country at stake. 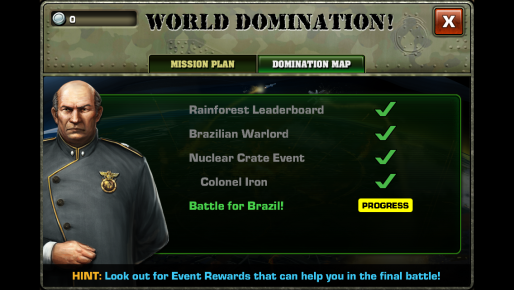 The World Domination feature adds an exciting and fresh dimension to the Modern War gameplay experience with:

• An entirely new way to play. World Domination is a PVP event specifically between the factions, giving Modern War fans an entirely new mission and objective to complete. With close to 70% of all players having joined or set up their own faction and over 170,000 factions formed to date – the heat is on to be the biggest and most elite military squad in the world.
• Choose your allies – and choose them wisely. Gamers will be able to create and join factions, and collaborate strategically to win the war and get that much closer to dominating the world.
• New challenges, fresh content, and a different country to fight for. Each World Domination event will feature a new set of Pre-War missions and quests in preparation for the main event – a different country to take over, and the opportunity to battle against new factions, on an ongoing basis.
• More ways to brag. In World Domination, players will be able to vie for the top of the leaderboards on their own as well as in their factions. 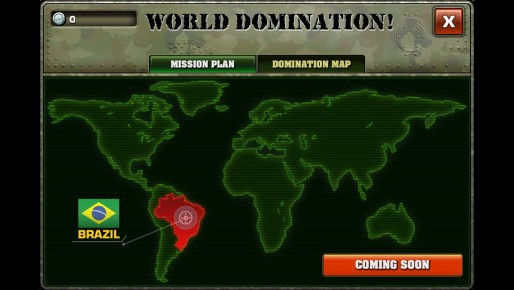 In addition to this new game-changing feature, players will also be able to become powerful war Commanders by building strong military bases, bombing enemy territory, completing covert missions and battling against other players.

Modern War is available for free on the App Store and on Google Play.