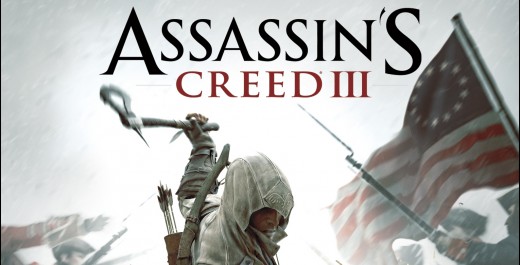 The Templars are at it again and a new assassin is needed.The Revolutionary War is your battlefield. Are you up to the task? Does the game live up to its hype?

Desmond Miles has returned to head the next installment in the critically acclaimed Assassin’s Creed series. Accompanied by his father William along with Rebecca, and Shaun, they find the Temple in a cave in New York. Desmond activates a large portion of the equipment, as well as an apparent timer to the event expected on December 21, 2012. With the end of the world rapidly approaching, Desmond must plug himself into the Animus. A device that allows him to re-live the past and search for a missing key that will unlock the only possible way to save the world.

Once plugged in, Desmond becomes one of two playable characters. The first is Haytham Kenway in 1754. A British nobleman that is a distant relative of his. Haytham started out as an Assassin but eventually turned against the order and joined with the Templars. Haytham’s first task in the game is to assassinate a man at an opera house. Upon the success of the assassination, he steals a medallion from the man. This medallion is thought to be a key to a special place for “Those that came before”. 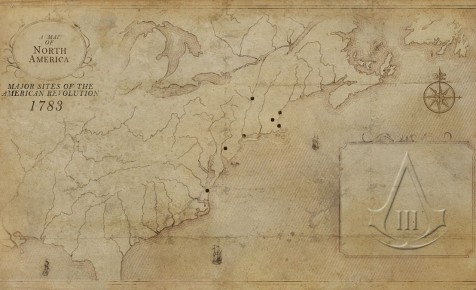 Once his task is completed, Haytham is sent to the New World in the Americas where he helps rescue a group of captured Mohawk Indians. During the rescue he meets a fair Indian maiden that will help him try to locate the special place, as long as he kills a certain General. The General dies, and Haytham is lead to a place of interest, but not to the special place he was seeking. Haytham becomes briefly involved with the maiden, and unbeknownst to him, a child is conceived. Haytham moves on to further his search and becomes the leader of the Templars while the maiden gives birth to the child and raises him as a Indian.

The Animus fast forwards to 1760 and we are introduced to the maiden’s offspring Ratonhnhaké:ton. After a sequence of hide-n-seek with his friends, and a hunting sequence that introduces you to the hunting aspect of the game, our future hero’s tribe is attacked by Colonialists that destroy their camp and traps his mother in a burning hut. Before Ratonhnhaké:ton can return to his camp, he is confronted by one of the Colonialists named Charles Lee. Lee almost chokes him to death, but allows him to live. Ratonhnhaké:ton swears vengeance to the mans face and then returns to his burning camp. He tries to save his mother, but to no avail as she perishes in the fire.

Years later, a teenage Ratonhnhaké:ton is told by the village Elder that he cannot leave the valley because their land is sacred, and shows him a sphere, which tells him of his tribe and their role as guardians of the Temple. He is told to seek out a retired Assassin, Achilles Davenport, who will aid him in preventing the imminent destruction of his tribe. He is given leave by the Elder to go East in search of him.

Achilles reluctantly accepts our young hero as an apprentice Assassin but changes his name to that of his own dead son, Connor. He teaches Connor all of the things a young assassin needs to know to survive and to defend the order, and our hero eventually dons the robes to enter into the battlefield of the war between the Templars and the Assassins. 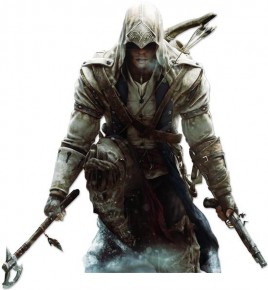 The storyline then follows along with the Revolutionary War, introducing characters like Ben Franklin, George Washington, Paul Revere and, for PS3 owners, Benedict Arnold. While the authors did use real events with real names, some poetic licenses were used as to incorporate our hero into these historical events and make him a key figure in American History. These additional details didn’t come across as too far fetched, and with whispers of secret societies all through the writings of history, seem most believable. The key to a great game has to begin with a great storyline, and Assassin’s Creed III started out with just that.

Gameplay in the open world environment is fluid and flawless. Playable characters can move freely in parkour style. Climbing buildings and traversing between them is easy as moving the analog stick and pressing a button. Climbing up to a high point can give you a birds eye view of an area, and with one quick move, you can dive off of your perch and into a pile of hay or a wagon full of hay.

How you play the game is up to you. You can sneak around, using silent assassinations and take downs, or you can go head-on into a battle, taking on enemies in hand to hand combat. Muskets and pistols are available to you, but reloading takes forever, and a quick stab in the throat is much quicker then reloading. Swords and battle axes are also available, and muskets don’t have to be reloaded to be deadly. Bayonets attached to the end are very useful tools. If you find yourself surrounded by a bunch of bloody Red Coats, you can always climb up onto a building or tree, then take them out methodically. This is a very useful tactic for liberating forts.

Another major addition is the Davenport Homestead missions. Starting with a single house and a few outbuildings, the player can perform missions for NPCs in order to convince them to settle near the Homestead, providing the player with raw materials and crafting facilities. Recipes for crafting can be obtained from chests throughout the game. Raw goods and crafts can then be used as part of a local economy, selling them at market by either trade-caravan or via sea convoys. Dependent on the goods being traded and the level of threat nearby, these goods can be attacked and stolen, or sold for profit.

Also near the Homestead is an abandoned wreck of a ship called the Aquila. Once a lumber mill is added to the Homestead, you’ll be able to take lumber to the harbormaster and he will have the ship up and ready to sail for you in no time. Once the ship is sea worthy, the Eastern Seaboard is ready and waiting for your sailing skills. You’ll navigate rough waters and command your own naval warship, sending enemies to their watery graves with cannons and an array of powerful naval weaponry. Or should you choose, ready a boarding party and take the fight to the enemy by battling hand-to-hand on the deck of their own ship. The Aquila can be upgraded with more cannons, other armaments including chain-shot, grapeshot, heated shot, hull reinforcement and a naval ram. With each naval mission complete, the risk of naval convoy capture is reduced. 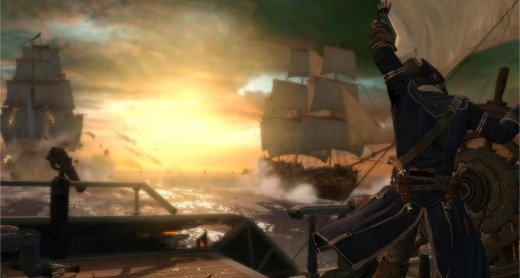 The graphics for the game are some of the best available for any console or PC game. The developers created a brand new gaming engine, called Anvil Next, just for the world of Assassin’s Creed III. What we as gamers get, is some of the best looking animations ever rendered in a video game. Seas that will roll you into sea sickness with their 20 foot swells to snow that will chill you to the bone and slow your pace. Animal animations will surprise you with their fluidity and ease of motion. Mountain lions will jump out at you with muscles flexing, paws ready to swipe, and jaws ready to rip you apart. The level of detail in environments, with changes of the season also changing the details, is at a level that borders on realism.

The level designs for the open world environments are just as impressive as the graphics. Cities and towns are set up to mimic real life locales of the time frame, with pass through buildings that open up shortcuts and add to the realism of the environments. City maps become invaluable, as do the tunnels under cities that make traveling from one part of a massive city to another quick and painless. New York, Boston and Philly are all designed masterfully. Rural environments get the same treatment. Valley Forge in the winter gives you the feel of a cold desolation that the troops of the time must have felt. 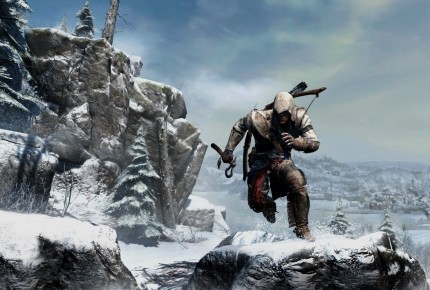 For completionists out there, be prepared to put in some long hours finding all of the collectibles and completing all of the side quests. The Wilderness will have you searching high and low for eagle feathers and Peg Leg trinkets. Boston will have you trying to track down and catch almanac pages for the great Ben Franklin. Each city and locale offers its own set of collectibles, and you’ll be busy finding them all.

Multiplayer returns with Assassin’s Creed III. With multiple types of gameplay to choose from, the depth alone may keep you busy online for some time to come.

Developer Ubisoft Montreal took a storied series and created a sequel worthy of the original. Assassin’s Creed III is more than just Game of the Year material, it just might be worthy of Best Game of a Generation title.