Earn a Platinum, get a congratulatory email?

We played and reviewed Killzone 3 back in February of 2011, and went as far as to earn the Platinum trophy on the 1st of March, 2011. Much to our surprise, almost a year and eight months later, we received this email: 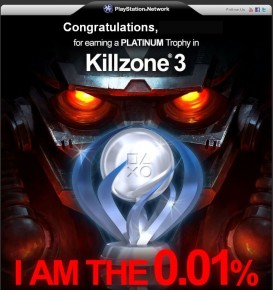 We were hoping for a redeemable code to go along with the email for something, but no such luck there.

Could this be the start of another rewards program, or just Sony trying to breath some new life into a  year and eight month old title?

We are hoping for a new rewards program.