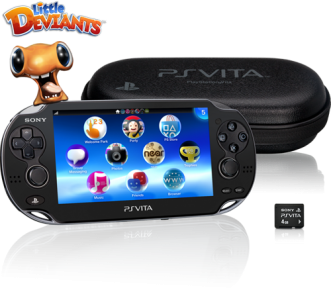 The PlayStation Blog has just announced a special pre-order deal for PS Vita fans. Check out the details after the jump.

Amazon currently has pre-orders available for the US:
PlayStation Vita First Edition Bundle

Amazon.ca has yet to list the bundle on their site. Check back later for a link.

Included with the PS Vita First Edition bundle is a copy of Little Deviants, which is a series of madcap adventures that allow you to have fun discovering and experimenting with the new PS Vita functions including rear touch and front touch, six-axis motion sensors, front and rear cameras and microphone. Little Deviants also offers an augmented reality shooter experience that lets players move around the real world firing shots and dodging enemies.