Leading video game publisher and developer NAMCO BANDAI Games America Inc. today announced their line-up of titles for the PlayStation®Vita handheld entertainment system and its February 22nd, 2012 launch in North America. Check out the details after the jump.

Each of the three titles, Touch My Katamari™, Ridge Racer®, and Shinobido 2: Revenge of Zen are set to give gamers a unique and compelling dose of fun, speed, and action that will take full advantage of the upcoming PlayStation®Vita system from Sony Computer Entertainment.

“We’re pleased today to officially confirm three titles for the PlayStation®Vita system to gamers across North America excited for the launch of this impressive new handheld gaming device,” said Carlson Choi, Vice President of Marketing, NAMCO BANDAI Games America. “Between the innovative new gameplay features in the irreverent new Touch My Katamari, the blistering speed and online connectivity of the gorgeous new Ridge Racer, and the intense, open-ended, assassin-based action of Shinobido 2: Revenge of Zen, NAMCO BANDAI Games will be delivering top-tier content for the launch of the PS®Vita in a very big way.” 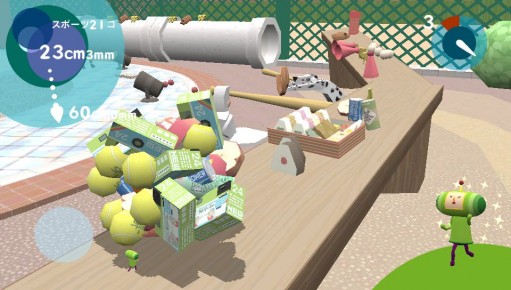 In Touch My Katamari, the ever-growing ball of bits and bobs is controlled by touching the screen or using both analog control sticks to roll it in any direction.  A completely new Katamari gameplay feature allows players to use the rear touch panel of the PlayStation®Vita system to stretch the ball either horizontally or vertically to pick up more objects at once or squeeze through a narrow gap.  With many more details yet to be revealed, the Prince is already limbering up in the wings to bring a dose of irresistible Katamari oddness to the PS®Vita.

With Ridge Racer, players can expect high-speed drifting at break-neck speeds in high-performance racing machines with exciting new gameplay additions. Drift racing fans looking for edge-of-your-seat action will be able to truly feel the on-screen drama through the revolutionary features of the PS®Vita using the “near” and Wi-Fi functionality that will allow players to instantly race against rivals from around the world in real-time.  Ridge Racer is co-developed by NAMCO BANDAI Games Inc. and CELLIUS, inc., a joint venture founded between NAMCO BANDAI Games Inc. and Sony Computer Entertainment Inc. in 2007.

Finally, in Shinobido 2: Revenge of Zen, players will step into the role of Zen, a master assassin, through a thrilling dynamic storyline of betrayal and intrigue.  Zen will use his honed ninja craft to assassinate and silently dispose of the opposition with satisfying and graphic kills. Developed by ACQUIRE Corp., renowned developers of the ninja stealth genre and countless smash hits, Shinobido 2: Revenge of Zen will bring an unparalleled level of assassin themed action to the PS®Vita.

Watch all videos from Namco Bandai Games America on YouTube at http://www.youtube.com/NamcoBandaiGames and visit us on Facebook at http://www.facebook.com/namco.

NAMCO BANDAI Games America Inc. is a leading interactive entertainment software publisher and developer based in San Jose, CA.  The company is a part of the NAMCO BANDAI group of companies known for creating and publishing many of the industry’s top video game franchises including PAC-MAN®, SOULCALIBUR®, NARUTO™ and Tekken® brands.  For more information about NAMCO BANDAI Games America Inc., and our products log onto http://www.namcobandaigames.com.

Created and published worldwide by NAMCO BANDAI Games Inc., the RIDGE RACER racing game franchise is one of the most successful and long-running in video game history. Originally a 1993 arcade game hit, to date over 17 million units have been sold worldwide in the series across mulitple home console and portable devices.  The series is known for its arcade-style drift gameplay and virtual race queen, Reiko Nagase, who has appeared in the series since 1996.

Headquartered in Tokyo, Spike Co., Ltd. is a Japan based video game developer and publisher aiming to create extreme entertainment to inspire consumers worldwide using unique marketing methodologies. Spike has published some of the best-selling franchises in Japan, namely Way of the Samurai and Kenka Bancho series. Spike also has extensive experience with the development of console video games, such as Dragon Ball Z: Ultimate Tenkaichi for PlayStation®3 computer entertainment system and other platforms.