MonkeyPaw Games, Inc. has announced the anticipated launch of the Japanese PS one® import section on the European PlayStation®Network. The new Import section marks the first time that European gamers will get the chance to play direct-from-Japan imports and classics. The first three classic titles include Arc the Lad, Cho Aniki and Arcade Hits: Sonic Wings Special.
The Arc the Lad Series is a critically-acclaimed tactical RPG that promises endless hours of addicting, strategic gameplay. Cho Aniki is one of the most provocative shooters ever released in Japan. Sonic Wings Special is a throwback shoot’em-up that will get the adrenaline flowing. As the first slew of many upcoming titles to be available for digital download on the PlayStation®Network Import section, these retro classics will be untouched from their original release. The titles are currently available at the affordable price of EU 4.99 each.

“Why is it that so many classic Japanese titles haven’t seen distribution outside of Japan?  MonkeyPaw’s mission is to share these forgotten gems with gamers around the globe.  We’re excited to offer our digital download import and classic titles to the European PlayStation®Store. It’s just a taste of what’s to come,” said John Greiner, president and CEO of MonkeyPaw Games, Inc.

About Arc the Lad

Arc the Lad was first published in the West by Working Designs as part of the Arc the Lad Collection in 2002. Originally developed by G-Craft in 1995, the tactical RPG redefined the genre. Storming onto the RPG scene with a compelling world and interesting characters, Arc the Lad served as a prologue to one of the longest-running tactical RPG series in history. Arc the Lad introduced gameplay features like jumping and body blocking that extended the tactical strategy element.

Players follow the young adventurer Arc, who sets out to save a world teetering on the edge of oblivion. But he’s not alone; seven different party members will join the quest over the course of the game, each one bursting with dozens of hand-drawn frames of animation that immerse players in the surreal fantasy landscape.

Further enhancing the game’s presentation, the epic soundtrack is widely remembered as one of the best in the history of RPGs. Players can also choose to plumb the depths of an optional 50-level dungeon that, if conquered, will influence future events in Arc the Lad II, unlocking a key character and a separate side quest. Relive the origins of the rising tactical RPG genre with Arc the Lad, available now as a PS one® Classic Import.

Cho Aniki will give Western gamers the chance to enjoy one of the most provocative and controversial titles ever released in Japan. Developed by Pre-Stage, this classic icon of the shooter era features some of the most outrageous concepts ever seen in video gaming. Deemed too daring for Western markets, the 2D shooter features over-the-top, homo-erotic visuals, utilizing real digitized characters as enemies and obstacles. The game’s unending spiral of the weird and wacky will challenge shooter fans, while maintaining a constant flow of humor and irony that will make you laugh as you blast your way through. Let the legendary Cho Aniki grab you by the dingleberries and pull you into its bizarre world.

Sonic Wings Special brings you to the fore of the great era of Japanese shoot‘em-ups.  This vertical scroller combines features of previous versions (Sonic Wings I-III) and delivers a mind-bending, trigger-finger-happy splurge through bullet heaven. Sonic Wings Special features 2-player, same-screen simultaneous play and a choice of multiple jet fighters.  Pick from 7 teams and fourteen pilots flying high in twenty-six different jets.  Each captain is detailed out in anime graphics so you get a real feel for your co-pilot.  There are 17 stages with multiple paths in which to choose while levels can be randomly served.  Take a spin on your P-61 Black Widow and feel the power of Sonic Wings Special. 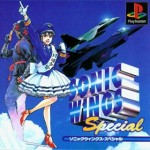