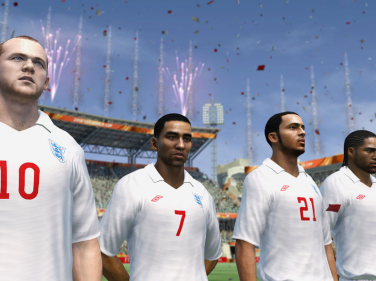 February 12, 2010 – New screens have emerged for EA Canada’s upcoming FIFA World Cup 2010 South Africa. The game, releasing in April, will feature every nation that participated in World Cup qualifying and will allow players to guide their favorite national team to worldwide glory. Yes, even you, Canada.

FIFA World Cup 2010 South Africa is being developed by the same team that put together FIFA 10, which won numerous Sports Game of the Year awards from across the games industry. It will feature the same excellent 360-degree controls that replicated football better than any other football simulator has before, it will also feature authentic rosters, and, as can be seen in the screens, realistic depictions of the players on the teams. Helloooooo Wayne Rooney! It will also feature the actual stadiums from the 2010 World Cup and amazing presentations that bring the World Cup to life.

Check out the new screens below and get excited for the arrival of FIFA World Cup 2010 South Africa on the Xbox 360, PlayStation 3 and Wii.