February 1, 2010 – Lego Harry Potter: Years 1-4 will be getting a May release date. The game, which will focus on the story from The Sorceror’s Stone (Philosopher’s, if you’re a Brit) to the Goblet of Fire. Each book gets successively darker and as a result, we’ll see young Lego Harry Potter grow into a mature young Lego man, fighting Voldemort, playing Quidditch and traipsing the halls of Hogwarts.

The Lego series of games have been highly popular, converting Indiana Jones and Star Wars into games aimed at warming the hearts of everyone from young kids to adults who grew up with the popular series. It helps that Legos have a universal cool factor. What boy didn’t grow up playing with Legos, building starships and houses and all sorts of other, fun things?

Expect years 5-7 to arrive sometime in the near future as Harry makes the transition to the world of Lego.

Lego Harry Potter: Years 1-4 will be developed by TT Games and will be published by Warner Bros. Interactive Entertainment. It will be released for the Xbox 360, PS3, Wii, DS and PC. 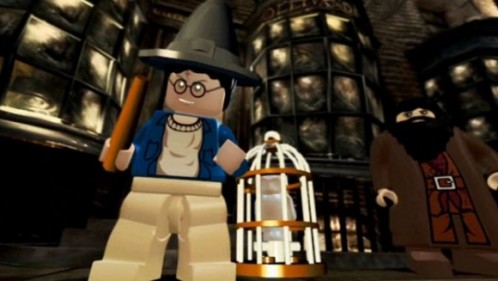