January 19, 2010 – A little over one year ago the small, two man development team over at Bolt Creative released Pocket God to the iPhone’s App Store. What started out as a relatively small project quickly caught on with iPhone and iPod Touch owners around the world. Of course, with popularity comes criticism, and Pocket God was no exception. What separated Bolt Creative from other developers was that they took the criticism to heart and used it to improve their products. Just about every criticism, community request, and complaint has molded the game to make Pocket God as enjoyable an experience as possible.

Now, twelve months and near thirty free updates later, the hard work is finally paying off. As of today, Pocket God has sold more than two million copies, making it the best selling paid app on the App Store ever. “We couldn’t be happier with the turnout we’ve seen at the island. The community has been absolutely incredible embracing this game. From the thousands of YouTube videos to the homemade Halloween costumes to the valuable user feedback we’ve received, we can’t thank our community enough for our success,” stated Dave Castelnuovo, CEO of Bolt Creative, in a comment on the game’s success.

The team at Bolt Creative is up to their knees in awards and praise from press around the world. Their title has even been referenced in games like Imangi Studios’ Harbor Master and Lima Sky’s Doodle Jump, something you don’t see every day in the independent games on the App Store. Of course, this success didn’t just happen overnight. It was the result of countless hours of hard work and consideration for the gaming community and the opinions of its members, one page other companies should definitely take out of Bolt Creative’s book. 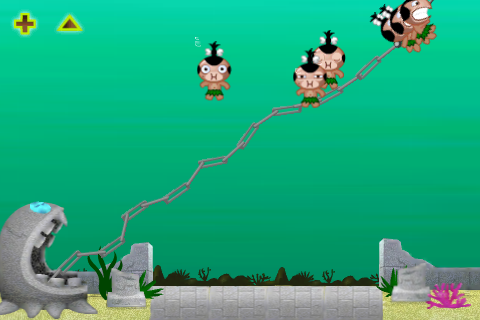 Impaling pygmies is only one of the many ways to show off your powers as a god in this amazing title.